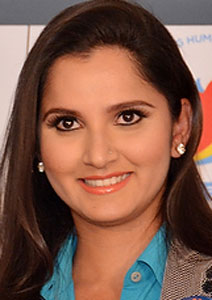 Indian tennis star and youth icon Sania Mirza was appointed Regional UN Women Ambassador to South Asia in November 2014. As India’s highest-ranked female tennis player ever, Ms. Mirza has used her spotlight to speak out on gender issues such as female foeticide and India’s decreasing sex ratio, and has encouraged young girls to challenge gender barriers, especially in the uneven playing field of sport.

She has been a role model to many children, including girls, to break barriers and strive for their goals in life and career choices. She has used her professional success to highlight social issues in India and expressed her strong desire to spread the message of gender equality.

“We as people who achieve so much need to be an example to women,” Ms. Mirza said. “It’s our responsibility to try and educate people in India that having a girl is a plus, not a minus. As a woman, I want to do everything I can to spread that word.”

Ms. Mirza is recognized as one of the most high-profile tennis players in India, a groundbreaking female athlete who has shattered gender stereotypes in the world of sport. From 2003 until her retirement from singles in 2013, she was ranked by the Women's Tennis Association as India's top player.

Ms. Mirza started the Sania Mirza Tennis Academy, launched in March 2013, with the aim of providing world class tennis training to Indian tennis players. The academy works also with rural talents and a few selected students are trained at no expense to strengthen India’s performance in tennis as well as provide opportunities to under-privileged athletes.

She has achieved a number of firsts for India, including surpassing USD 1 million in career earnings, winning a pro-level title and winning three major mixed doubles titles at the 2009 Australian Open, the 2012 French Open and the 2014 US Open. Ms. Mirza has been recognized with multiple awards for her excellence in sport, including the honours of Padma Shri and the Arjuna awards by the Government of India. She has an impressive list of 14 medals for India, including four gold medals in the Afro-Asian Games, a silver and a bronze at the Commonwealth Games and eight medals, including a gold, at the Asian Games (becoming the only Indian tennis player –male or female– with such a high medal count at the Asian Games). Ms. Mirza has the distinction of having achieved a career-high world ranking of 27 in singles and 5 in doubles (the only Indian tennis player to have achieve such a ranking in both singles and doubles).
news