A series of Open Days on women and peace and security are being held around the world in the run-up to a UN Security Council Open Debate on the 28th of October. Nigeria, the current President of the Security Council, selected “Women's Participation and Role in Conflict Prevention and Mediation as the theme for the debate.

Open Days bring together women from civil society, senior government and UN leaders in a given country or region to exchange views on conflict resolution and peace-building. 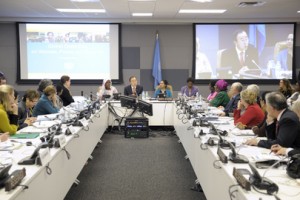 UN Secretary-General Ban Ki-moon (head of table, second from left) addresses the Global Open Day on Women, Peace and Security on 21 October 2010 held in observance of the 10th anniversary of Security Council resolution 1325. This year a series of Open Days on women and peace and security are being held around the world in the run-up to a UN Security Council Open Debate on the topic (Photo: UN/Mark Garten).

In 2010, during the Open Days, more than 1,500 local women leaders gathered in 29 locations to voice their perspectives on how to accelerate implementation of UN Security Council Resolution 1325 on women and peace and security. UN Women in partnership with the Department of Political Affairs, the Department of Peacekeeping Operations, and the UN Development Programme, provide support for these events.

At the Open Day meeting in Nepal held with the officials from the Ministry of Home Affairs, Ministry of Defence, women reiterated their call for a gender-responsive security sector and women's involvement at all levels. They emphasized increased participation, greater access to justice, the reform of existing security sector laws and policies, and demanded no amnesty for sexual and physical violence committed against women.

The Secretary of the Ministry of Defence recognized the contributions of UN Women to developing the capacities of the Nepalese Army to implement resolution 1325, and said that the “collaboration between Government and civil society is making the democratization process more inclusive. Nepal is the only country in South Asia that has adopted a National Action Plan to improve the participation of women in post-conflict reconstruction.

At a regional meeting for South Asia held in New Delhi, women presented a joint resolution outlining measures to improve the participation of women in peace building and as peacemakers. It drew on the experiences of activists in conflict areas in Afghanistan, Bangladesh, India, the Maldives, Nepal, Pakistan and Sri Lanka. They stressed the importance of using peace processes to transform gender relations and rebuild society based on values of gender equality and non-discrimination.

Speaking of experiences in Pakistan, Mussarat Qadeem, head of the Paiman Trust, noted,“We convinced mothers of combatants that violence is not sanctified in our religion and that jihad is against humanity. Once convinced, they influence their sons to give up fighting and undergo counseling and skill training. The strategy has been very successful.

Huria Samira Hamidi, Country Director, Afghan Women's Network, spoke of optimism despite challenges. “I see a change in Afghanistan. The way people think is altering. I see enthusiasm amongst the youth, as they are motivated to change existing attitudes. More women are coming forward to include themselves.

In the Philippines, representatives from indigenous and Muslim women's organizations, the conflict-affected regions of Mindanao and the Cordilleras, urged for stronger measures to enable women's increased participation in ongoing peace negotiations. They raised concerns about the challenges confronting internally displaced persons, and called for vigorous implementation of the Philippine National Action Plan on resolution 1325.

In the Democratic Republic of Congo, the Minister of Interior along with the Vice Governor and Vice-President of the provincial assembly of South Kivu promised to facilitate women's access to decision-making and up-scale implementation of resolution 1325. Participants called for more support for female candidates in elections, efforts to include more women on electoral lists, mobilization of rural women to vote and ensuring security for all women.

Related News
14/10/2015
Turn words into action involving women for lasting peace
13/10/2015
The most underutilized tool we have for successfully building peace is the meaningful inclusion of women – Executive Director
13/01/2014
Syrian Women’s Joint Statement on Engagement in the Syrian Political Process
14/05/2013
In the words of Saran Keïta Diakité: Girls receive a visit from a different man every night, a ‘new husband’
30/11/2012
At UN Security Council, UN Women calls for leadership for inclusive peacebuilding
END_OF_DOCUMENT_TOKEN_TO_BE_REPLACED