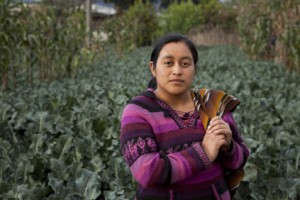 Change agents like Laura are committed to making a difference in the lives of young women in Guatemala's indigenous communities. (Photo credit: UN Women/Phil Borges)

At 24 years old, Laura has already endured a lifetime of suffering.

Growing up in an indigenous community in Quetzaltenango, in western Guatemala, Laura lost her mother at the tender age of 13. She dropped out of school to become the substitute mother for her eight siblings. Her father turned to alcohol, which fueled violence. Laura was his regular victim.

But Laura was never defeated. Today, she is an advocate for women and adolescents, thanks to a project implemented by Population Council Guatemala, a grantee of the UN Trust Fund to End Violence against Women. The project aims to empower indigenous young women as agents of change in their communities.

Guatemala has a grim history of decades of civil war, where women, especially from indigenous communities, are at risk of multiple forms of violence. Nearly 45 percent of Guatemalan women have suffered some instance of violence in their lifetime.

They face a daunting challenge in moving from abuse and oppression, as Laura experienced, to respect, safety and confidence. But the Population Council and its local partners believe that change is possible. The key lies in transforming young indigenous women's positions to inspire whole communities to seek solutions for a better future.

“We work with girls and young women to lead their communities to recognize and define the problem of violence, and to find solutions from within, instead of imposing them from outside," explains Alejandra Colom, Programme Manager from the Population Council Guatemala.

A central part of the project is a mentorship model in which young indigenous women are enrolled as interns in local organizations and engaged in a range of violence prevention activities. The project is reaching over 4,000 girls in 45 Mayan communities in five states across Guatemala.

Laura interns with the organization Defense of Indigenous Women (DEMI) in Quetzaltenango. She leads girls' clubs in her community to explore issues of self-esteem, human rights, reproductive health and prevention of violence. Self-assured and not much taller than most of her students, Laura makes eye contact with each one of her young students as she engages them in discussion.

She wasn't always this confident. But after over a decade of beatings, she made a decision to finally stand up for herself and create a different life, one of strength and dignity.

When Laura heard that DEMI was interviewing for an internship program, she found an excuse to leave the house to attend the interview. A day later, she was awarded the position. It was the first time in her memory that she felt valued.

That was only a year ago. What a difference a year makes in the life of one person determined to make change.

The girl leaders and members of the girl clubs are also involved in a community mapping exercise. Using GPS-technology, they plot every household, building and route to produce maps that show where girls and women feel safe or at risk.

“Because girls are expected to stay at home, community leaders are not even fully aware of how many girls there are in their communities, Alejandra says. “The community mapping is making young women and their safety concerns visible for the first time. The leaders are also impressed when they see the girls use technology.

The community safety maps are catalysing discussions about violence against women and girls, along with ways the community can come together to prevent it. The mentorship programme has advanced not only career prospects for young indigenous women, but also early detection and response to discrimination and violence cases.

In addition to her internship, Laura is continuing her schooling, with the hope of becoming a lawyer and perhaps a more formal, legal voice for Guatemalan women. Today, she smiles confidently even around the father. Sober now, he accepts his daughter's role with some pride as he listens to her message.

Related News
08/08/2013
International Day of the World's Indigenous Peoples
27/05/2020
On the front lines of COVID-19, women’s organizations provide vital services as first responders as violence against women spikes
19/10/2018
Sepur Zarco case: The Guatemalan women who rose for justice in a war-torn nation
15/05/2018
Advocating for services and legislation to protect survivors of violence in Ecuador
29/05/2013
Breaking the silence on violence against indigenous girls: UN report calls for urgent action
END_OF_DOCUMENT_TOKEN_TO_BE_REPLACED