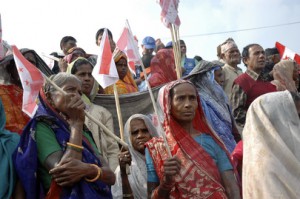 Members of the Madheshi community of Biratnagar attend a political rally in 2008 to demand autonomous federal regions and greater representation in parliament. As a result of collaborative awareness building and advocacy efforts in the past few years, 33 percent of seats in the Constituent Assembly and local peace committees are now reserved for women. (Photo: UN/Agnieszka Mikulska)

Nepal has adopted a National Action Plan on women, peace and security, making it the first country in South Asia and the second in Asia to do so.

Adopted on 17 February and based on UN Security Council resolutions 1325 and 1820, the Plan was developed through a collaborative process with UN Women, the government, political parties, civil society organizations and international development partners. It provides Nepali women the opportunity to get actively involved in the reconstruction of their country, which emerged from a decade-long conflict in 2006.

“Political and sexual violence was common as was the destitution of women across Nepal, said Bandana Rana, Chairperson, SAATHI. “The key agenda during those ten years [of conflict] for women's groups was peace, and women have been working at different levels to generate peace.

Apart from help in drafting the Plan, UN Women supported the Ministry of Peace and Reconstruction to increase awareness about the UN Security Council resolutions, improve the capacity of government personnel, train women leaders and advocate for women's participation after the armed conflict ended.

As a result of awareness and advocacy in the past few years, 33 percent of seats in the Constituent Assembly and local peace committees are now reserved for women.

The adoption of the Plan is of great significance globally as only 25 countries of 192 member states have adopted such plans.

Related News
21/10/2020
In the words of Miriam Coronel-Ferrer: “I became the first female negotiator to sign a final peace accord with a rebel group”
19/10/2020
From where I stand: “Teaching girls how to read and write is one of the biggest ways I can make a difference”
28/05/2020
From where I stand: “Although the situation is unpredictable, we are still working to maintain peace”
04/05/2016
Investing in women for peace and future generations: Timor-Leste adopts a national action plan on Security Council resolution 1325
07/10/2013
Women's inclusion in peace process critical for successful transition in Afghanistan: John Hendra
END_OF_DOCUMENT_TOKEN_TO_BE_REPLACED