As a preventive strategy to reduce the prevalence of violence against women and societal violence overall in a region with one of the highest rates of rape in the world*, UN Women's Caribbean Office and its partners have developed a community intervention programme for boys aged 13-16 that is challenging gender stereotypes while teaching teens how to build healthy relationships. 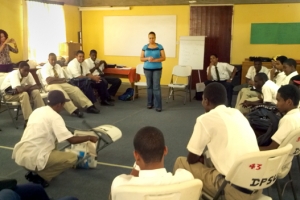 Boys aged 13 to 16 participate in an exercise as part of the Community Intervention Programme to prevent violence in Roseau, Dominica. Photo: Partnership for Peace/Annie St. Luce

The Community Intervention Programme for young men was developed based on UN Women's flagship Partnership for Peace (PfP) project, implemented in a number of countries across the Caribbean. Focused on prevention, the Community Intervention Programme is a 10-module course piloted in March 2012 in two Caribbean countries: Dominica and Antigua & Barbuda.

Psychologist and Social Worker, Alex P. Vega, and consultant to the UN Women programme, explained: “The programme gives the young boys the space to express the traditional social and cultural beliefs attached to masculinity/femininity - the negative stereotypes and prejudices about women and girls, about sexuality and relationships that they have learned all their life - to come out and then work with them to root out these ingrained myths and beliefs surrounding gender roles.

“We want to work with the young men in a safe space to examine how these beliefs are discriminatory and harmful to women and anyone who does not fit in the traditional gender role, Vega added.

The young men enrolled in the programme come from diverse socio-economic backgrounds and schools. The majority of them have been raised primarily by their mother and/or grandmother as their fathers are absent from the household. They are a mixed group: some of the boys are repeatedly sent to the principal's office; others are considered well-behaved, typical teenagers.

“Although some of them may seem to be very quiet, there's a lot going on underneath that we need to look at, explained Annie St. Luce, Family Life Educator with the Dominica Planned Parenthood Federation and a PfP facilitator.

“It may take you an entire day to debunk one particular myth and as soon as they go back into that particular environment, it is right there in their faces and you are just hoping that the work you've done with them is so secure and that foundation is firm, so that when they see these things, they can now begin to question it and ask why they behave in a particular way, St. Luce added.

St. Luce said the boys were highly critical of young girls in their society, the manner in which they dress and the way they carry themselves.

“They saw most young girls as ‘rags' -they literally said it- and some of the reasons would have been that the young women ‘make themselves this way', added Philip Carlisle, also a PfP facilitator and Pastor of a faith-based organization.

Using the analogy of peeling an onion, Vega explains that the aim is to achieve a transformation of traditional gender ideas, beliefs and practices: “In order for that to happen, we have to peel the layers bit by bit… We want the young men to come out of the programme with a set of tools for critical thinking to create better relationships with themselves, their partners and others and contribute to making their society more equal and more equitable.

“The programme has given me a better way to approach girls, said one of the young students. “I would not call them in such a way so that they feel down but [recognising that] every woman has her own rights, just as men have their own rights.

As a group, the boys in Dominica agree that the pilot programme has helped them to be less judgmental and spend more time on reflective thinking.

“Anytime I end up in a situation that I am supposed to get angry for, I try and control myself. I usually just think of all the things I would be ruining for myself if I engage that situation, said another one of the boys. “After this programme I just hope that I will be able to help others that I see in the same situations before I was in this programme.

* According to a Joint Report by the United Nations Office on Drugs and Crime and the Latin America and the Caribbean Region of the World Bank, three Caribbean countries are among the top 10 in the world for reported incidences of rape. All Caribbean countries (where comparable data is available) rank higher than the global average for rape.