Protecting witnesses of wartime rape in Bosnia and Herzegovina 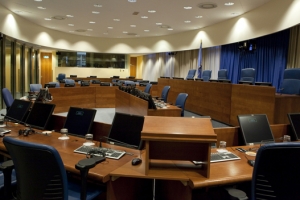 The International Criminal Tribunal for the former Yugoslavia has been prosecuting the perpetrators of rape and other war crimes. Photo courtesy of the ICTY

More than a decade has passed since Witness Number 99 first took the stand in The Hague at the International Criminal Tribunal for the former Yugoslavia.

Witness 99, whose voice was disguised during the trial and face covered with a cloak to preserve her anonymity, told the court how she was imprisoned in a sports hall in the center of the town of Foca with 100 other women and girls and raped on a daily basis by the Serb-led military forces.

She described how the soldiers would walk in at night and point to who they wanted. “You, and you and you … and the girls would have to go. They treated us like cattle, animals. I saw women being taken away, she said. “I didn't know if they would come back.

The testimony of Witness 99 gave a voice to all the victims of conflict-related sexual violence in Bosnia, who are estimated to number from 20-40,000.

In the film “I came to testify produced by US-based PBS television channel and supported by UN Women, the stories of the 16 Bosnian women that first testified to their rapes in The Hague are documented.

The landmark judicial decision by ICTY to prosecute, for the first time in history, rape as a crime of war was based on the impact of their testimony. This set an important precedent for future tribunals, such as the International Criminal Tribunal for Rwanda and the International Criminal Court, to treat the crime of wartime rape in the same manner.

Bosnia is no longer at war, but it is still not at peace. When the women who had survived the Foca rape camp travelled back to the town after the war to place a commemorative plaque on the building where they had been imprisoned, tortured and raped local villagers swarmed the car and prevented them from approaching the building.

Sixteen years after the end of the war the status of survivors of wartime rape and other forms of sexual violence has not been fully addressed and continues to haunt women. There is still a strong stigma attached to women victims of wartime rape and to the many children conceived from these rapes and they continue to suffer on the margins of society. Within the framework of the regional programme on Women, Peace and Security, UN Women has provided assistance to the survivors to rebuild their lives and look to the future as well as assistance to the process of prosecuting wartime rape cases.

UN Women supports the NGO Medica Zenica to provide comprehensive and effective care for wartime rape survivors and witnesses before, during and after their trials. UN Women also works with the NGO Association Alumni of the Centre for Interdisciplinary Studies and the Courts of Bosnia and Herzegovina to monitor wartime rape trials; document the treatment of witnesses by judges and prosecutors; and provide training and technical support to improve prosecutions of wartime rape.

These guides aim to empower survivors and their associations to advocate for and uphold their rights and also to honour the courage of the 16 women that first travelled to The Hague to demand justice for the women of Bosnia and Herzegovina.