Violence against Women Living with HIV in South Africa: research on perceptions and experiences 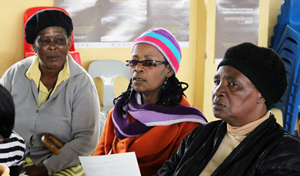 South African Positive Women Ambassadors say they will use the research for advocacy at the grassroots level. Photo credit: Johanna Kehler

Supported by the UN Trust Fund to End Violence against Women, which is managed by UN Women on behalf of the UN system, the report is being launched across the country during the 16 Days of Activism. Following the first launch, in the province of KwaZulu Natal, Johanna Kehler, Executive Director of the Aids Legal Network, discussed the findings:

1. The cover page of the report includes the following quote from a woman living with HIV: “If I knew what would happen, I would have kept it to myself. Why did you choose this statement? .

We chose this statement because we think it captures the wide experience of humiliation, rejection and abuse that women experience when their HIV status is disclosed. Many women described how they had expected support from their family and how they instead experience a continuum of violence in all aspects of their lives, perpetrated by partners, families, friends, communities and service providers alike.

Several women described how they have chosen to move away from their communities to get a fresh start in a new community where people are unaware of their HIV status. I think that this short quote summarizes this experience of a never-ending circle of violence in women's lives after their HIV status becomes known.

2. The programme implemented by ALN with support from the UN Trust Fund is documenting and addressing violence and other rights abuses as experienced by positive women. Why is it so important to focus on this target group?

There is a lack of knowledge and data on violence perpetrated against positive women, and particularly little knowledge based on the experiences of the women themselves. In a context like South Africa, where sexual and gender-based violence and HIV have reached endemic proportions, we need to fully understand the way these pandemics intersect in the lives of women living with HIV.

3. Are there any findings in the research that you found particularly surprising or innovative?

The severity and extent of violence experienced by women on a daily basis and women's strength in sharing these horrific stories of violence is what was most striking to us. I think that the research also demonstrates the complete disconnect between women's realities and the perceptions of their communities.

The communities tend to believe that women are supported by their families and service providers when their HIV status is disclosed, which is completely contradictory to women's lived reality of discrimination and abuse by both family and service providers alike. Even though many community members have a certain degree of awareness of some of the risks of rights violations faced by women when their HIV status is disclosed, they still tend to believe that women, despite the risks, still have to disclose her status.

4. Now that the research has concluded, how do you envisage using its findings to promote change around ending violence against women and HIV/AIDS?

Research is an important tool for advocacy to influence policy and programming. We will use its findings and the knowledge generated to engage with health care providers and to try to influence the way services are provided. We also want to use the research to influence policy-makers and inform the national response to women and HIV in South Africa. Through our programme, we will also use the research as the basis for community-based interventions to raise awareness about the rights of women living with HIV.

5. What are the main recommendations stemming from the research?
First, the research shows the need to design and implement programmes that are based on and informed by the experiences of women living with HIV, to assure effective responses to their needs and realities. Secondly, there is a dire need for rights education and awareness-raising throughout South African society to address violence and other rights violations against women living with HIV.

Thirdly, the data shows the urgency to redesign service-provision and build the capacity of service providers regarding risks, vulnerabilities and violence. Through our programme, we will continue to work to enhance women's access to available HIV prevention, testing, treatment, care and support services without fear of violence and other rights abuses.