On World AIDS Day (1 December), we spoke to survivors and community changemakers in South Africa who as part of UN Women’s HeForShe community-based initiative and a joint UNAIDS programme are engaging men and women to reject violence against women and seek HIV testing and treatment. 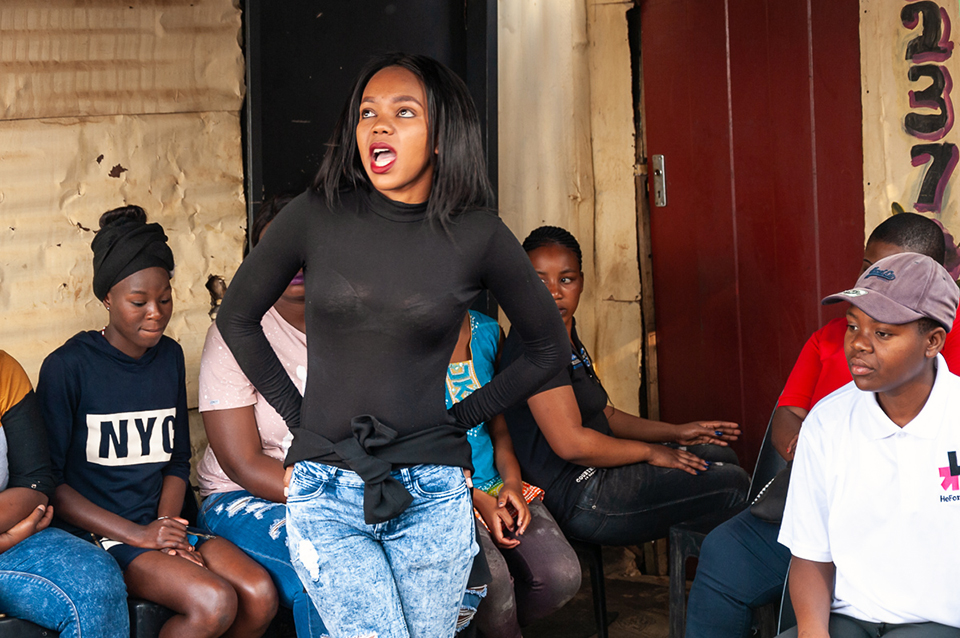 Sarah Baloyi, one of the leaders of the Young Women for Life Movement group in Mamelodi Township. Photo: UN Women

“I was in a very dark place. I had multiple sexual partners and was part of a lifestyle that was not good or healthy for me,” says Baloyi. Her friend, Chabalala says, “I had many personal problems. I engaged in a transactional relationship with an abusive older man to fund my education and provide for my family.”

Their lives turned around following their involvement in UN Women’s HeforShe community-based initiative that aimed at improving attitudes and behaviours around gender-based violence (GBV) and HIV.

“Karabo introduced me to HeForShe, a community that cares for one another,” says Baloyi. “The dialogues showed me that I am not alone in my mistakes and could change my life. I have been inspired to promote safe and healthy living for young girls and to provide them with the same loving acceptance that was extended to me.”

Chabalala adds, “Many young women don’t open up at home about problems they are facing. These dialogues give us a space to express our thoughts and feelings and to ask any questions that we have about life.” 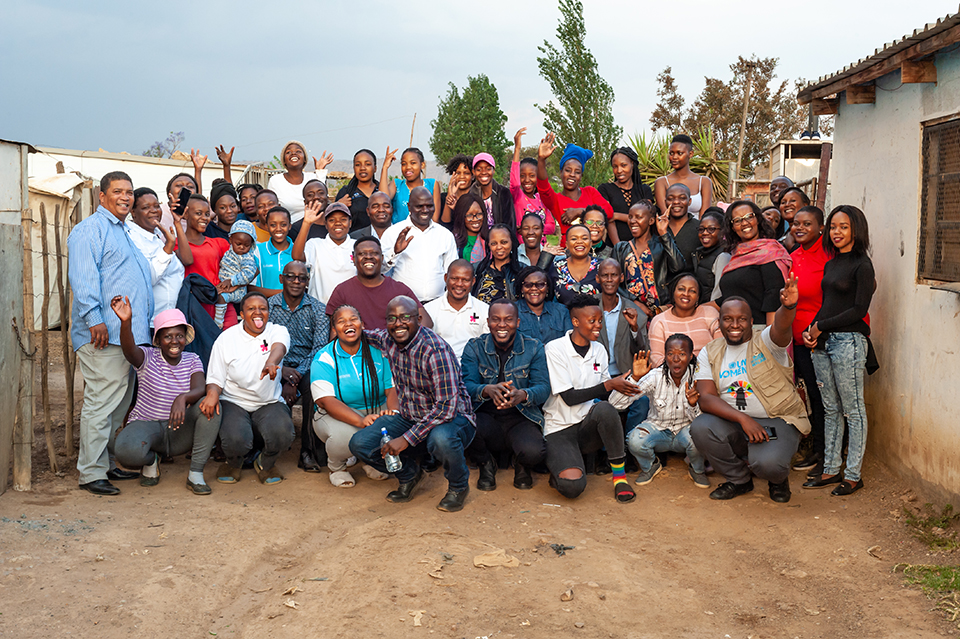 Mamelodi Township Young Women for Life Movement group, with partners on a visit from Malawi and Zimbabwe. Photo: UN Women

“The dialogues are coordinated by 151 trained women and men ‘changemakers’, including young women like Baloyi and Chabalala, equipped with knowledge on HIV and violence prevention, unequal gender norms, the importance of HIV testing and adhering to treatment, responsible sexual behavior, and how socio-economic factors can drive HIV infections among men and women,” explains UN Women's South Africa Multi-Country Office Representative, Anne Githuku-Shongwe.

“Many women in Mamelodi have been victims of abuse or witnessed femicide in their homes, often at the hands of men who [are alcoholic].” says Baloyi.

“All I feel is anger,” says Chabalala. “These men don’t respect us. Women in our community are being raped and killed. Some men who perpetrate these crimes are out on bail the following day.”

“There has been a rise in GBV since the COVID-19 lockdown,” says Baloyi. “Abusive partners have been stuck at home and they are frustrated. They are no longer able to spend their time working or drinking with friends, and take it out on their partners and children. This is especially the case in informal settlements, where families live in one- or two-room shacks.”

South Africa is home to almost one-fifth of people living with HIV worldwide and has an HIV prevalence rate of 20.4 per cent among adults (15-19 years). In line with trends across Sub-Saharan Africa, in 2019, women accounted for the majority of new infections in the country. Structural gender inequalities, discrimination, violence against women and girls, and unequal gender norms continue to undermine efforts by women and girls to prevent HIV and use HIV/AIDS services.

“The stigma around HIV prevents people from seeking treatment. I have met some older patients who still fear going to the clinics because they feel judged or embarrassed,” says Chabalala.

To increase the uptake of HIV testing, the changemakers partnered with 20 local HIV counselling and testing clinics across participating districts. They also facilitated outreach for HIV testing at community and church events and developed a referral system. In two years, the HeforShe initiatives have resulted in 62 per cent of those engaged testing for HIV, and 36 per cent returning and adhering to their antiretroviral treatment. However, because of the COVID-19 pandemic, people living with HIV and people at higher risk of HIV infection are facing life-threatening disruptions to health services.

Inspired by the positive impact of UN Women initiatives in communities and empowered by the change makers, Mamelodi community members founded the national ‘Young Women for Life Movement (YWfLM)’, which has grown to 2,035 members. With support from the SACBC, the group is currently monitoring the proceeding of 30 cases of sexual and gender-based violence and 17 cases of femicide in the justice system, as well as supporting the families of survivors. They also played a crucial role in organizing food supply drives to the most vulnerable households in their communities during the COVID-19 lockdown.

“I started the Mamelodi chapter of the Young Women for Life Movement,” says Chabalala. “Being part of this community of 200 powerful young women has taught me so many things and helped me grow. It has changed my life”.

“As a YWfLM member, I work with our local clinic and visit people living with HIV in our community to confirm that they are taking their medication and to ask if they need any assistance or additional supplements,” says Baloyi. “We also have an HIV-positive support group that now mainly connects online due to the pandemic.”

Both Baloyi and Chabalala believe that men need to be more involved in initiatives to improve attitudes and behaviours to prevent GBV and HIV. “Young men need to not only be part of this conversation, they must have their own dialogues where they focus on how to change their mindset,” says Chabalala.

Baloyi adds, “Many more men need to join women in our fight. Men must join us in court and in the streets. They must fight with us.”

Related News
02/06/2015
Girls kick violence with Grassroot Soccer
06/12/2012
Violence against Women Living with HIV in South Africa: research on perceptions and experiences
18/07/2017
In the words of Itumeleng Komanyane: If male policymakers don’t understand gender, how can they pass progressive policies to protect women?
01/12/2015
Executive Director brings orange to the iconic Nelson Mandela bridge in South Africa
28/04/2021
Take five: Young women leaders in Malawi are ready to build back better from COVID-19
END_OF_DOCUMENT_TOKEN_TO_BE_REPLACED