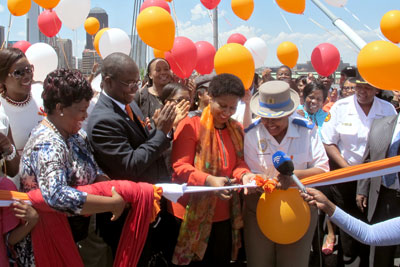 UN Women Executive Director Phumzile Mlambo-Ngcuka cuts the ribbon at Nelson Mandela Bridge, which will be lit up in orange to mark UN Women’s “Orange the world” efforts under the UNiTE campaign. Photo: UN Women/Helen Sullivan

Coinciding with World AIDS Day and the 16 Days of Activism, her visit was brightly decorated in orange, red and white (the South African Department in Women’s colour for ending violence against women), as the colour palette for the morning’s activities.

The day began with a breakfast at the Joburg Theatre, organized by the City of Johannesburg’s Department of Social Development and UN Women’s South Africa Multi-Country Office. The City’s Chief Operating Officer, Gerald Dumas and Executive Director of the Department of Community Development, Dudu Maseko, attended the event, which was chaired by UN Women South Africa Multi-Country Office Deputy Representative Themba Kalua. Ms. Mlambo-Ngcuka delivered the keynote speech to 150 guests, amid much ululation and cheering.

In her speech, the Executive Director said: “Violence against women and girls is not only one of the most serious human rights violations, it is also one of the most tolerated violations of rights—including here in South Africa. We know from statistics that the levels of crime and violence against women and girls in South Africa are [among] the highest in the world.”

At the end of the speeches, audience members were invited to ask questions or make statements about the 16 Days of Activism campaign and violence against women in South Africa, in particular. Among the issues raised were the lack of protection for illegal immigrants and the need for media to promote gender equality. One audience member stressed the need for discussion about violence against women to be more open.

Ms. Mlambo-Ngcuka responded to each question, emphasizing the importance of the role played by government in encouraging women to report abuse. She spoke about UN Women’s Safe Cities Programme as well as Planet 50/50 by 2030, highlighting the importance of equal pay, recognizing unpaid care work performed by women, and ensuring that all macro-economic policies are gender-responsive.

The guests then headed to the iconic Nelson Mandela Bridge, five minutes away, which, to mark UN Women’s “Orange the world” efforts under the UNiTE campaign, will be lit up in orange from tonight until the end of 16 days of activism, on 10 December.

With the bridge closed to traffic and a tremendous orange and white ribbon waiting to be cut, guests were handed red, orange and white balloons. More than 100 balloons were released after Ms. Mlambo-Ngcuka cut the ribbon. She emphasized the symbolic choice of colours for both the UNiTE and South African Department of Women’s campaigns, aimed at “shining a light on the issue of violence against women and girls, and symbolizing a brighter future for all.”