Coverage: UN Women Executive Director in South Africa for the 16 Days of Activism

UN Women Executive Director, Phumzile Mlambo-Ngcuka is in South Africa this week for a series of high-profile events marking the 16 Days of Activism Against Gender-Based Violence.

UN Women’s newest Goodwill Ambassador, Danai Gurira, together with Executive Director Phumzile Mlambo-Ngcuka, engaged with over 200 young women leaders at the African Leadership Academy, discussing their challenges and experiences within academia and the work force, and in ending violence against women.

"I want young girls to remember the woman who came before them so they know the courage of women the courage inside themselves," Ms. Gurira told the young women.

“My calling is to be a vessel and to amplify. I thank the @UN_Women for choosing me to work with them. It is important to remind the world that as women we have the answers ourselves.” @DanaiGurira in conversation with young women @ALAcademy #HearMeToo #16Days @unwomenafrica pic.twitter.com/dlpCf8IFcf

"If you don't speak to as many young people as possible in our society, we are totally missing the point," said Ms. Mlambo-Ngcuka, emphasizing that youth make up a huge part of the global population and that their voices and experiences need to be heard and shared.

Aligned with this year’s UN theme, “Orange the World: #HearMeToo”, which seeks to broaden the global conversation and highlight the voices and activism of all survivors of violence and advocates around the world—many of whom are often missing from the media headlines and social media discussions—the event brought together young South African women from all walks of life.

Grizelda Grootboom, who was trafficked at a young age, shared her story of survival and healing. "I tell my story so it doesn't happen to another girl," she said.

At the Global Citizen Festival Mandela 100 in Johannesburg today, UN Women Executive Director announced the appointment of internationally renowned award-winning actor-playwright Danai Gurira as its Goodwill Ambassador. As a UN Women Goodwill Ambassador, Ms. Gurira will dedicate her support to putting a spotlight on gender equality and women’s rights as well as bringing unheard women’s voices front and centre. Read the press release>

Highlighting the power of advocacy and the urgent need to get everyone involved in efforts to end violence against women and girls, the Executive Director said: “UN Women is delighted to welcome Danai Gurira in her new role as Goodwill Ambassador to support our work on gender equality."

“Her engagement with us will bring generations of girls greater belief in a positive future. As an influential role model in both her personal and professional life, and a voice for those who have not yet been heard, we look forward to her ability to drive action on gender equality in communities across the world," the Executive Director added.

“We are at an urgent time, a time where our participation is crucial to ensure that all women and girls, no matter where they live, where they grow up or where they work, are in a world where their potential can be fully actualized; a world of true equality,” said Gurira, the first Black American-Zimbabwean Goodwill Ambassador for UN Women. She is most commonly referred to as “General Okoye” by her fans, due to her recent on-screen persona in Marvel’s blockbuster phenomenon Black Panther and in the film Avengers: Infinity War. 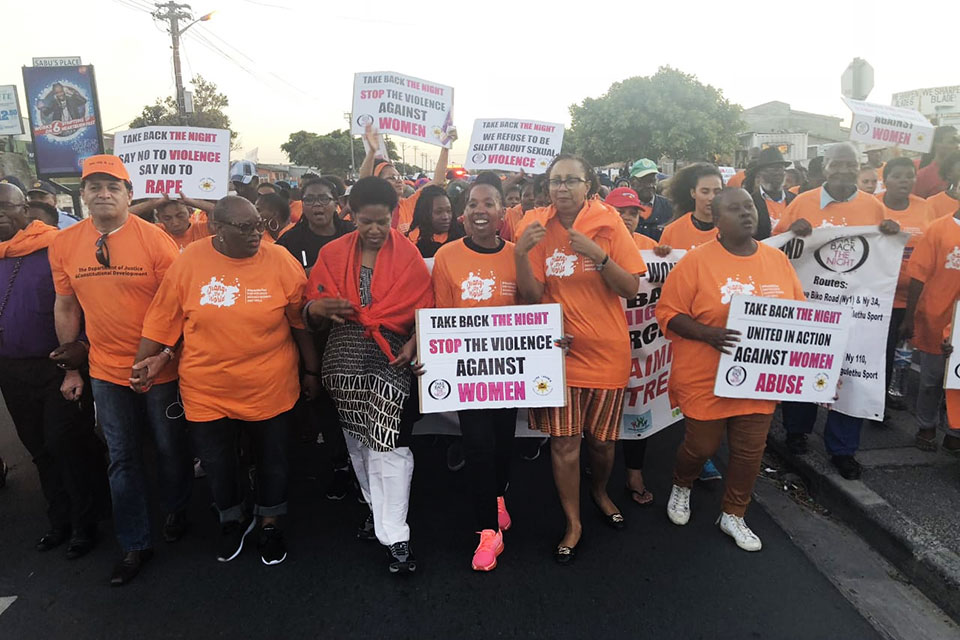 UN Women Executive Director leading the Take Back the Night March in South Africa as part of the 16 Days of Activism. Photo: UN Women

Speaking at the march, UN Women Executive Director drew attention to the need of a robust legal system to protect women and girls from violence and appealed to young people to report violence if they experience it.

“There must be proper policies in place, which must be implemented by those in power for the common good, especially for young girls and women,” she said. 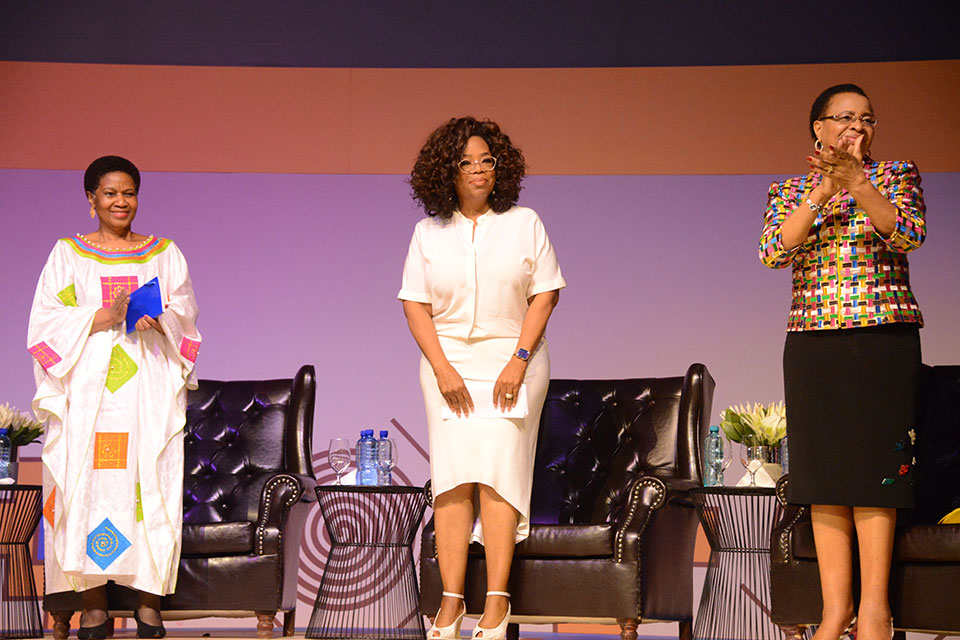 "Not everyone can be famous, but everybody can be great, because greatness is determined by service," said Oprah Winfrey in her keynote address. "Ask the question, how can I be greater than myself."

Speaking at the event, Ms. Mlambo-Ngcuka explained the UN theme for this year's 16 Days of Activism, "Orange the World: #HearMeToo. "The hashtag #HearMeToo is a continuation of #MeToo," she said. "#MeToo gave the opportunity to many women who felt they were alone to hear someone say, "Me Too"; I believe you and what you're telling is true." She also encouraged men to be actively involved to stop the abuse of women and girls.

We have learnt the importance of casting the net wider. That is why we work closely with men. Men must be actively involved in changing the status quo (around women and child abuse). - Phumzile Mlambo-Ngcuka. #mandela100 #BeTheLegacy #heforshe #LivingWithPurpose 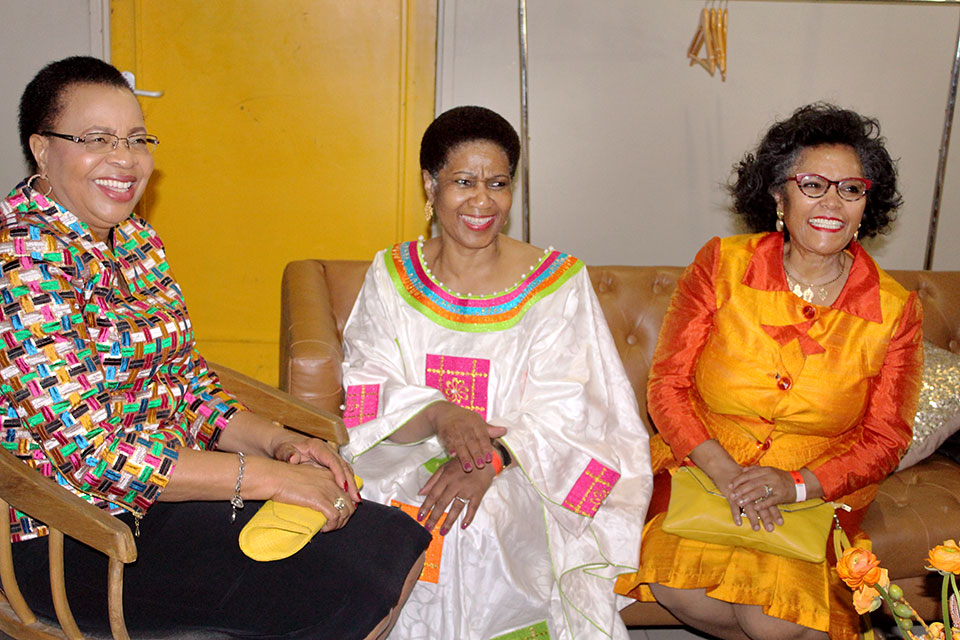 Josina Machel, activist, survivor and step daughter of Nelson Mandela, stressed, "We need to recognize the needs and wishes of survivors of violence... people need to say, 'I hear you, I believe you."

Related News
Executive Director brings orange to the iconic Nelson Mandela bridge in South Africa
“Ride on! Speak Out!”: Nine countries, 15 bikers, one issue – ending violence against women
In Tanzania, a caravan of activists visits five regions over eight days on a journey to end violence against women
All Africa Games Endorse UN Secretary-General’s UNiTE Campaign
Around the world, women and men of all ages “orange their hoods” to end violence
END_OF_DOCUMENT_TOKEN_TO_BE_REPLACED