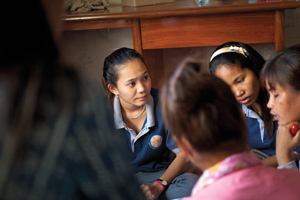 “I was perceived as a bad girl," says Voleak, “because I worked at night, with a group of women with limited education, and managers pushed us to sit and drink with the clients and to compete for the big-spending ones."

In today's competitive world, solidarity may seem outdated. For Voleak, a 25 year-old beer seller, understanding the value of solidarity marked the beginning of a new life. Her first years as a beer promoter in Cambodia's Phnom Penh Province were not easy.

Defying the conventional work-life rhythm, beer promoters start work in and around Cambodia's bars and karaoke parlors after night falls. Paid often on a commission-only basis, they are exposed to high levels of alcohol consumption, violence and harassment.

According to CARE International, 83 per cent of Cambodia's female beer sellers have dealt with unwanted sexual contact whilst 38 per cent subjected to forced sex. Yet, they remain in the profession, many having been compelled to move over from the garment industry during the recent economic crisis.

Pursuing dreams of improving their workplace, Voleak and other beer promoters in Phnom Penh decided to reject the competitiveness their profession demands, and come together as a group.

Since 2009, the Solidarity Association of Beer Promoters in Cambodia (SABC) has advocated for the rights and safety of women working in the beer industry, supported through life-skills, gender awareness and peer education by CARE International Cambodia, a grantee of the UN Trust Fund to End Violence against Women. 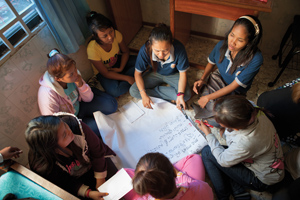 But the organization was not initially welcomed by all. “When the solidarity group was first established, most of our members were congratulated, but not by the beer companies that were very concerned about how it would work, and its goals and objectives. Sometimes the group was also challenged by other beer promoters, as the idea was very new to them.

The Solidarity Group has recently gained support from the Ministry of Women Affairs that has initiated dialogues with outlet owners on women's rights, gender-based violence, laws and the businesses' responsibility for the safety of the beer promoters.

The Ministry is also joining hands with the group on a mass media awareness raising campaign. Early initiatives include illuminated signs in bars to remind customers that “Beer promoting is a job that has value and dignity" and “Dignity and honor are the demand of all human beings."

Meanwhile, CARE International has worked along with the Solidarity Association to encourage companies' compliance with the Cambodia Beer Selling Industry's code of conduct.

This sets standards for contracts, salaries and benefits, safe transport to and from work, dignified uniforms, and recommends sessions on sexual and reproductive health and negotiation with customers.

For many of the women change is slowly evident also at the personal level. Today, Voleak is the administrator and finance coordinator of the Solidarity Association. This role has given her confidence in her abilities to teach and to lead, and allowed her to fund her young son's education. “All this is thanks to my work with other beer promoters through SABC," she says, “I have come to know myself and who I want to be." 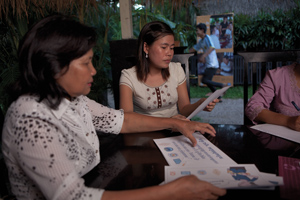 Despite these achievements, Voleak is aware that some of the key battles for her and her peers lie beyond the boundaries of the workplace, in the society. Here gender stigma and discrimination they face are rooted. Working on long-term social change, they have targeted male clients, especially university students, with sessions on power dynamics, stereotypes and the social impact of gender-based violence.

On International Women's Day in 2011, a landmark was achieved when the Minister of Women Affairs asserted publicly that “violence against women, especially in the beer industry, requires multiple responses from all actors."

Voleak and her colleagues have taken the first step, bringing change through solidarity, and they have seen progress begin. What they now expect and advocate for is that others in the industry - outlet owners, clients, beer companies - as well as the government and broader society, join them on this path.