Cameroon elections catapult women, more than doubling their representation in the National Assembly

This unprecedented increase, bringing the proportion of women in the National Assembly to 31 per cent, a result of synergy between actors, adoption of an Electoral Code and involvement of a gender expert.

In Cameroon, defenders of gender equality and the empowerment of women today have a reason to celebrate. This follows the announcement of the results of the legislative elections held on 30 September 2013. The results of the elections, announced in October have ensured that the National Assembly now has 56 women deputies, out of a total 180, i.e. 31.1 per cent.

The percentage exceeds the threshold set out in the Beijing Plan of Action. It is even more significant since the numbers have more than doubled. The  previous legislature had only 25 women deputies out of 180, a mere 13.8 per cent.

The advocacy efforts were already underway some years ago and were further spurred by UN Women’s strategic plan for gender and elections that received national approval on 12 June 2012. 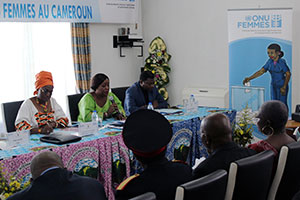 With the municipal, legislative and Senate elections of 2013 in mind, this important roadmap document set in motion a series of strategic interventions including advocacy, capacity strengthening and awareness-raising. These were aimed at key constituents in the electoral process such as Elections Cameroon (ELECAM), the organization in charge of elections, along with the Government, media, traditional and religious leaders, and women candidates. Targeting public opinion, the aim was to bring about a significant and visible increase in the representation and participation of women in decision-making bodies.

"When More Women in Politics was established seven years ago, I would not have believed that such results would be achieved!" says Josephine Odera, Regional Director for UN Women. "I am delighted that the UN Women's partnership with Cameroonian authorities, women and civil society has not been in vain. The 30 per cent threshold is crossed! We can only do better!"

In April 2012, a law was adopted on the Electoral Code of Cameroon. It was amended and supplemented by another law passed in December 2012, as a result of which gender issues became a legal prerequisite in the compilation of all candidate lists for the municipal, legislative, regional and Senate elections.

A UN Women Gender and Elections expert supported the meetings and discussions on ELECAM activity on a regular basis. This involved integrating gender dimension throughout the electoral process, as well as information sharing. During this process, and as an important precedent, the ELECAM electoral board rejected 48 of the 250 candidate lists presented by the 38 political parties, because they did not meet the conditions required by law. Of these 48 candidate lists, 20 were rejected for failing to respect the gender requirement.

While the results are historic, Ms. Odera says the work must continue with a double emphasis. First, it must focus on  adopting specific measures to ensure the equal participation of women and men in the electoral process – measures at a legal or constitutional basis and not just voluntary. Second, the work must concentrate on strengthening the capacities of elected women representatives so that they can take on any task assigned.