A cattle-raising cooperative in Luxor has secured decent jobs and working conditions where 26 women earn an income and are the primary decision-makers on land and the division of labour.

Green fields dotted with bright red tomatoes line the arid countryside around the village of Al Tod, in the Egyptian governorate of Luxor (a municipality some 300 km from the capital, Cairo). The sun shines as warm winds blow the dresses and headscarves of women who are sorting and clearing the fields. Nearby, men check the irrigation system to make sure water is reaching all tiny roots. A vast change, from just one year ago, when many of these same fields were barren.

Twenty six of these local women used to be members of the Al Tod Agricultural Community Development Farmers’ Association, but since the land was owned only by their male counterparts, the men dominated decision-making and did not let the women have a say. 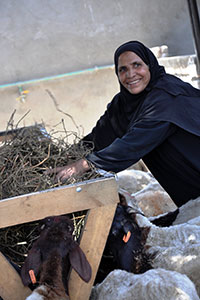 After years of marginalization and hardship, the 26 women left the association and formed a cooperative, which spurred them to independently start raising cattle – a new source of income for them. The cooperative has secured decent jobs and working conditions for these women, nearby and where the women are shareholders and make the decisions on the division of labour or buying livestock.

“People used to resist my leadership in the farmer’s association or any other institution,” says Amal Abel Aziz, the 33-year-old female engineer who helped form the cooperative. A divorcee with a Bachelor’s degree in Architectural Engineering, she has had to overcome multiple challenges. “I decided not to listen to what others say and just focus on my goals and how to achieve them.”

The poverty rate in Upper Egyptian governorates is much higher than in Lower Egypt, as cultural, social and religious norms hinder women in rural areas from taking advantage of work opportunities outside the home. They are also disadvantaged by gender discrimination in wages and work conditions. According to Egypt’s Human Development Report 2008, Upper Egypt’s share of the country’s extreme poor is 66 per cent, with almost 95 per cent of the poorest villages located in Upper Egypt.

According to the 2012 report of Egypt’s Central Agency for Census and Statistics, women are officially registered as comprising only 23 per cent of the formal, registered workforce. But because much of their work is informal, the World Food Programme estimates that in reality women account for more than 75 per cent of the agricultural labour force in Upper Egypt.

The new women’s cooperative is part of the “Pro-poor Horticulture Value Chains in Upper Egypt” (Salasel) project, an MDG-funded Joint Programme designed to improve the efficiency of the horticulture and agribusiness sector in Upper Egypt, in efforts to combat poverty. The joint programme brings together four UN organizations – the United Nations Development Programme (UNDP), United Nations Industrial Development Organization (UNIDO), International Labour Organization (ILO) and UN Women – in a partnership with the Egyptian Ministry of Industry and Trade and the Ministry of Investment. By organizing income-generating activities, it aims to improve the position of small farmers in export and domestic markets and create decent and secure employment in the region for both men and women.

“Through our work in this cooperative, each woman will have a monthly income of at least 300 to 400 Egyptian pounds,” explains Amal.  As members of the farm association, they used to have no monthly income.

Two other cooperatives have also been established in Beni Sueif, another governorate in Upper Egypt.

“Empowering women and addressing the lingering negative challenges are among the priorities for UN Women,” says Mohammad Naciri, UN Women Country Representative in Egypt. In one year, UN Women has launched three women-led cooperatives in Upper Egypt to push forward women’s inclusion in the economy and advance gender equality. One of our goals is to bring forward women’s leadership in the economy and provide them with real income-generating opportunities.”

The cooperative’s launch took place at the governorate in June 2013, with representatives from UN Women, the Joint Programme and Misr El Kheir Foundation. UN Women and the founding members have worked closely with Misr el Kheir Foundation, providing income-generating assets (such as cattle), business development training and technical support (such as training on how to raise and care for cattle).

“After heading the cooperative, I became more ambitious and independent,” said Amal, at the launch event. “One day, I will be Luxor’s governor and will make decisions to improve people’s income and well-being.”

Related News
23/04/2013
New Horizons: Ethiopian women join efforts to escape poverty
12/09/2019
From Tanzania to Algeria, rural women are taking charge of their lives and livelihoods
11/07/2019
Ask an activist: Why are women lacking land rights in Tanzania and what can be done about it?
10/01/2019
From where I stand: “Yanouh cooperative increased my income and freedom of movement”
13/10/2016
Stepping out of the Boma: Maasai women of Tanzania take charge of their own lives and livelihood
END_OF_DOCUMENT_TOKEN_TO_BE_REPLACED