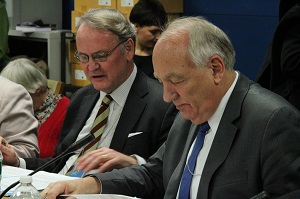 On 7 March, 2013, during the 57th session of the Commission on the Status of Women (CSW), UN Women Deputy Executive Director John Hendra moderated a high-level side event titled “Achieving Gender Justice: The Case for Reparations”. The event, co-hosted by the Permanent Mission of Finland, the ICC Liaison Office to the UN, and Global Action to Prevent War, addressed the question of “how to achieve transformative justice for women through reparations processes in the wake of conflict”.

Panelists included Elisabeth Rehn, Chairperson of the Board of Directors of the ICC Trust Fund for Victims; Stephen Rapp, US Ambassador-at-Large for War Crimes Issues; Luz Mendez, President of the Advisory Board of National Union of Guatemalan Women; and Saidu Conton Sesay, Commissioner, National Commission for Social Action, Sierra Leone (a grantee of the UN Trust Fund to End Violence against Women).

Reparations are a key component of women’s rights to comprehensive justice as well as an important contributing factor to post-conflict recovery and rebuilding. As such they continue to be an area of focus for UN Women in all areas – from providing technical support at the country level, to strengthening the policy and normative framework at the international level, to conducting research and directly supporting the establishment of national reparations programmes.

Mr. Hendra’s opening remarks at the side event

UN Women’s 2011 report ‘Progress of the World’s Women: In Pursuit of Justice’ includes recommendations on reparations for women