“I like being a police officer because it was always a dream of mine. When we were little we saw it as a far-fetched dream; the country was in civil war; women could not join these institutions, but as soon as the opportunity arose, I took it”, says 35-year old Noemi Cerritos from Santa María de Usulután in El Salvador.

This was not the last time Noemi would have to go against the tide to achieve her goals and set a precedent. She does so every day, fighting violence against women, and supporting survivors of rape and sexual abuse. 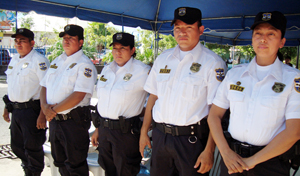 She is part of a group of policemen and women in the Specialized Institutional Unit (UNIMUJER-ODAC), which brings together members of the southern division of the National Civil Police to assist women in situations of violence in the city of Puerto de la Libertad, El Salvador. This is the first time such a unit has been established which aims to develop specialized skills for members of the National Civil Police.

The programme was created as part of the Comprehensive Law for a Life Free from Violence for Women, which came into effect on 1 January 2012. It addresses crimes specifically related to gender-based violence. According to Article 25 of the law, institutions such as the National Civil Police have an essential role in the prevention and ending of such violence.

The Police in El Salvador have in the past been part of other initiatives which integrate services for survivors, including a programme run by the First Lady. But UNIMUJER, established in December 2011, is the first dedicated police unit offering specialized assistance in El Salvador. The unit offers a designated space for reporting acts of violence against women, legal advice and information, and follow-up and support for cases filed.

It works closely and is part of a Safe Cities project supported by UN Women in partnership with civil society organizations, with funding from Zonta International. So far, the Safe Cities programme has been implemented in six countries in Latin America (Argentina, Brazil, Chile, Colombia, El Salvador, Guatemala and Peru), with strategies to empower women at the community level and advocate for public policies to ensure women’s safety in urban spaces.

According to Noemi, it is not easy to work in an environment where a macho culture prevails, which often disregards women’s rights to live violence-free. She often feels that she is going against the tide, the reason why she and the rest of the unit have earned the nickname “salmon police,” referring to the fish that swim long distances against the tide to reach their destination.

The UNIMUJER pilot scheme is being replicated in other municipalities in El Salvador as well, with over 100 police officers trained so far. It has helped to spread the word among women to inform them of the recourse and support they have within the police force.

As Noemi puts it: “I get a lot of satisfaction in knowing that if there is even one woman who we assist and assist well, we are giving her the self-worth she deserves. I believe we are beginning to do work that will, in time, change the situation.”

A multiplier effect is underway due to enhanced awareness which has also resulted in higher reporting of violence against women cases in Puerto de la Libertad.

“It’s not because there were no such crimes before, but rather women did not have the confidence to report them. Now they say ‘go and see them because they really helped me; report it because it’s a crime and we women have rights’. So women recommend that other women go to the Unit, hence the increase in reports,” concludes Noemi.