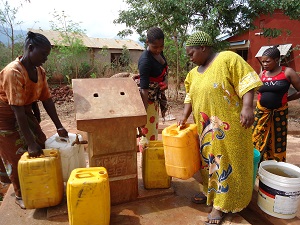 “For a long time, water was a constant problem in our village, and we women definitely felt the impact,” explains 29-year-old Maria from Kingolwira, a small village in the mountainous region of eastern Tanzania. “Especially during the dry season we had to walk for eight hours to reach the river [in the Uluguru Mountains], which was contaminated. You could get diarrhea and a stomach ache if you drank it. Children were dying and there was a lot of conflict in our community, because everyone was trying to secure enough water to take care of the household.”

In Tanzania, as elsewhere in Africa, women bear the brunt of providing their communities with water, walking for miles each day to fetch water. In spite of their central role, women rarely have a voice in water supply and management schemes. Instead, they take on an unequal share of domestic tasks within their households, and spend a staggering amount of time fetching water from distant, disease-prone and often dangerous places. 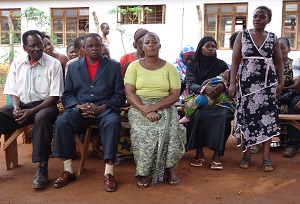 Spending most of their time on domestic chores, women often forego a formal education, which results in even fewer opportunities for income-generating activities outside the home – creating a downward spiral known as ‘time poverty’ . But the Kingolwiran experience testifies to the benefits of involving women in the management of an increasingly scarce resource.

“Life starts with clean water. Without it, our children cannot be healthy, our daughters cannot go to school and our women cannot be safe,” 39-year old Margareth asserts as she introduces her fellow female members of the water committee in Kingolwira.

In places like Kingolwira, where water is scarce and often supplied by informal vendors, in the past it needed to be bought at a very high price, yet remained uneven in quality. Those who could not purchase water would then have to turn to contaminated water coming from shallow wells, or walk the extraordinary distance to and from the village.

Amidst concerns of a growing water crisis which leaves women particularly vulnerable, UN Women and the UN Capital Development Fund (UNCDF) are implementing the Gender Equitable Local Development (GELD) pilot programme in partnership with local government authorities to support equitable planning and budgeting with the aim of improved gender-responsive public goods and service delivery. The Municipal Council of Morogoro invited women to identify Kingolwira’s most pressing needs through a series of community consultations. Drawing on women’s traditional duties as the main water collectors, the discussions resulted in the formation of a water management committee consisting of five women and five men. 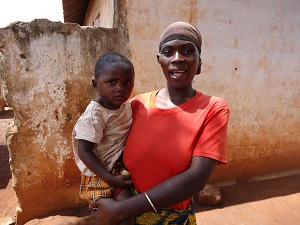 28-year-old water kiosk supervisor Scholastika says she is happy to work for the benefit of her community and to give her son a better future. Photo: UN Women/Laura Beke

“Everyone immediately agreed to tackle the problem of water shortage, because the situation was so bad that it affected every aspect of life,” says 28-year-old Scholastika, as she joins her weekly water committee meeting. Aware of the predicaments they faced in the past, the women of the committee knew that they not only had to bring the source of water closer to their community, but also make sure that the water would be clean, safe and affordable.

In a community-wide effort and with the support of local water authorities, they decided to construct a small dam in the lower slopes of the Uluguru Mountains, from where the water would be piped into a nearby tank for further treatment. Resulting in no less than seven water kiosks where safe, treated water is stored in a tank and distributed. Now accessible from every street in Kingolwira, the village has undergone a remarkable transformation: the price of the ten jerry cans needed per family on a daily basis decreased from 5,000 TSZ (3 USD) to 250 TSZ (0.15 USD), while the appointed kiosk supervisors ensured an equitable distribution of clean water.

“When women and men work together to solve the problems of our community, wonderful things can happen,” Margareth says, as the water management meeting comes to a close. “We decided in the community that fixing the water problem was a priority, and now we do not have to worry about water anymore. Instead of having to spend all our money and time on water, we can now use those resources to ensure that our children are healthy, our daughters go to school and our women are safe.” Watching her fellow committee members leave the meeting, she whispers, “Maybe I can even expand my small business and become a true business woman.”