Ensuring mothers do not die when giving life

“My main work is to do deliveries. In our health center there are on average 120 deliveries a month including two or three dead, but we try our best to avoid this,” says Fatmata Condé a midwife student in the locality of Donka in Guinea, trained by UN Women to address complications during pregnancy and delivery, due to violence.

Fatmata is trying to ensure safer deliveries, which often saves the lives of mother and child. She is one of the many mid-wife participants of the joint programme that UN Women –in partnership with UNFPA, UNICEF and WHO – is implementing to reduce maternal and child mortality in Central African Republic, Chad, Guinea, Haiti, Mali, Niger and Togo.

According to the UN Secretary-General’s Millennium Development Goals Report 2012, an estimated 287,000 maternal deaths occurred in 2010 and even when the maternal mortality ratio (the number of maternal deaths per 100,000 live births) decreased between 1990 and 2010 for the developing regions as a whole, it is still 15 times higher than in the developed regions.

Evidence presented at the Summit on Family Planning in 2012 shows that more than 220 million girls and women in developing countries who don’t want to get pregnant are unable to access and use modern contraceptives, information, and services. This results in over 60 million unintended pregnancies every year, which puts girls and women at serious risk of death or disability during pregnancy and childbirth, and unsafe abortion. 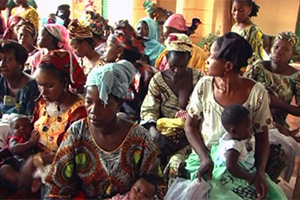 The five-year (2012-2016) UN Joint programme supported by the French Muskoka Fund in the seven countries, advances efforts to reduce maternal and child mortality highlighting the links between violence against women and maternal health, promoting funding for maternal health through gender-responsive budgeting and planning, and training midwives and community health workers.

“The UN Women training was very useful in the sense that we learned that by helping women victims of violence, we help both women and children. We learned to provide for women and deliver medical care. Today when a woman comes here, she will benefit from an HIV test, a pregnancy test, and in case of a rape we can provide emergency contraceptive pill, we are also doing the Hepatitis B and Tetanus test. Also we report the case to the police and help write a medical-legal report that allows women to have access to justice,” Fatmata adds.

In addition, UN Women is working to address maternal health on a larger UN effort, collectively known as the ‘The Health 4+’ (H4+), to accelerate progress in saving the lives of women and newborns, and to accelerate progress towards achieving the Millennium Development Goals by ensuring better access to health for women and addressing some of the persistent root causes of maternal mortality such as gender inequality, violence against women, low access to education – especially for girls, child marriage and adolescent pregnancy, among others.

There is no doubt that the Millennium Development Goals (MDGs) have already achieved remarkable results and have positively impacted the lives of billions of people. However, the MDG5 goal, which focuses on improving maternal health, is one of the eight goals that is seriously lagging behind, and despite considerable progress, its implementation on the ground is far from the 2015 target of reducing by three quarters, between 1990 and 2015, the maternal mortality ratio globally.

Improving the health of mothers depends on giving birth with the assistance of a skilled birth attendant and quality medical supplies, but also on advancing women’s rights, listening to their voices and respecting women’s choices. Girls who have been educated are likely to marry later and to have smaller and healthier families. Educated women can recognize the importance of health care and therefore a child born to a mother who can read is 50 per cent more likely to survive past the age of five.

The more we can do for women’s rights to be respected, the lower the rates will be of mothers dying during pregnancy, of abortions and of teenage girls getting pregnant.

Meanwhile, one preventable death is still too many.

Related News
07/03/2013
Child Marriages: 39,000 Every Day – More than 140 million girls will marry between 2011 and 2020
29/04/2013
Experts call for increased efforts to improve maternal and newborn child health in Africa
12/12/2017
Press release: UN Initiative to boost resilience of women and youth in the Sahel through climate-smart agriculture launched at One Planet Summit
17/07/2017
Maternal health gets a new boost in Liberia
01/07/2013
The gender dimension of the Millennium Development Goals Report 2013
END_OF_DOCUMENT_TOKEN_TO_BE_REPLACED