Joint press release by UNFPA, UNICEF, WHO, UN Women, the United Nations Foundation, World Vision, Girls Not Brides, Every Woman Every Child, World YWCA and The Partnership for Maternal, Newborn and Child Health.

Between 2011 and 2020, more than 140 million girls will become child brides, according to United Nations Population Fund (UNFPA).

If current levels of child marriages hold, 14.2 million girls annually or 39,000 daily will marry too young.

Furthermore, of the 140 million girls who will marry before the age of 18, 50 million will be under the age of 15.

Despite the physical damage and the persistent discrimination to young girls, little progress has been made toward ending the practice of child marriage. In fact, the problem threatens to increase with the expanding youth population in the developing world. 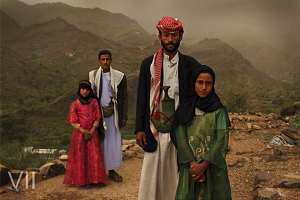 Tahani, 8, is seen with her husband Majed, 27, and her former classmate Ghada, 8, and her husband, outside their home in Hajjah, Yemen, 26 July, 2010. Photo Credit: © Stephanie Sinclair/VII/Tooyoungtowed.org

“Child marriage is an appalling violation of human rights and robs girls of their education, health and long-term prospects,” says Babatunde Osotimehin, M.D, Executive Director, UNFPA. “A girl who is married as a child is one whose potential will not be fulfilled. Since many parents and communities also want the very best for their daughters, we must work together and end child marriage.”

Girls married young are more vulnerable to intimate partner violence and sexual abuse than those who marry later.

“Complications of pregnancy and childbirth are the leading cause of death in young women aged 15-19. Young girls who marry later and delay pregnancy beyond their adolescence have more chances to stay healthier, to better their education and build a better life for themselves and their families,” says Flavia Bustreo, M.D., Assistant Director-General for Family, Women’s and Children’s Health at the World Health Organization. “We have the means at our disposal to work together to stop child marriage.”

On 7 March, a special session of the UN Commission on the Status of Women (CSW) will focus on child marriage. The Governments of Bangladesh, Malawi and Canada will jointly sponsor the session. It is held in support of Every Woman Every Child, a movement spearheaded by U.N. Secretary-General Ban Ki-moon that aims to save the lives of 16 million women and children by 2015.

The session will address the problems created by early marriages and ways to prevent them. Mereso Kiluso, a Tanzanian mother of five now in her 20s, who was married at 14 to an abusive man in his 70s, will describe her experience.

If child marriage is not properly addressed, UN Millennium Development Goals 4 & 5 – calling for a two-thirds reduction in the under-five mortality rate and a three-fourths reduction in the maternal deaths by 2015 – will not be met.

Child marriage – defined as marriage before the age of 18 – applies to both boys and girls, but the practice is far more common among young girls.

Child marriage is a global issue but rates vary dramatically, both within and between countries. In both proportions and numbers, most child marriages take place in rural sub-Saharan Africa and South Asia.

The 10 countries with the highest rates of child marriage are: Niger, 75 per cent; Chad and Central African Republic, 68 per cent; Bangladesh, 66 per cent; Guinea, 63 per cent; Mozambique, 56 per cent; Mali, 55 per cent; Burkina Faso and South Sudan, 52 per cent; and Malawi, 50 per cent.

In terms of absolute numbers, because of the size of its population, India has the most child marriages.

What progress has been made to stop the practice has been in urban areas where families see greater work and education opportunities for young girls.

A violation of the rights of girls

“No girl should be robbed of her childhood, her education and health, and her aspirations. Yet today millions of girls are denied their rights each year when they are married as child brides,” says Michelle Bachelet, M.D., Executive Director of UN Women.

Child marriage is increasingly recognized as a violation of the rights of girls for the following reasons:

Despite the fact that 158 countries have set the legal age for marriage at 18 years, laws are rarely enforced since the practice of marrying young children is upheld by tradition and social norms.

“Child marriage is not only wrong, it is dangerous. It exposes a young girl to profound health risks from early pregnancy and difficult childbirth and it exposes her baby to complications of premature birth,” says Anthony Lake, Executive Director of UNICEF.

According to the UN, complications from pregnancy and childbirth are the leading causes of death for girls aged 15-19 years in developing countries. Of the16 million adolescent girls who give birth every year, about 90 per cent are already married. UNICEF estimates some 50,000 die, almost all in low- and middle-income countries. Stillbirths and newborn deaths are 50 per cent higher among mothers under the age of 20 than in women who get pregnant in their 20s.

In many poor countries, most young girls, regardless of age, are forced to demonstrate their fertility once they are married.

“These children, because that’s what they are, are discouraged from using contraceptives or might have to ask their husbands’ permission, or they have no knowledge of or access to what they need,” says Carole Presern, PhD, Executive Director of The Partnership for Maternal, Newborn & Child Health and a midwife.

Loss of girlhood and health problems related to early pregnancy are not the only hazards confronting young brides.

Even though some parents believe early marriage will protect their daughters from sexual violence, the reverse is often true, according to UN studies.

Young girls who marry before the age of 18 have a greater risk of becoming victims of intimate partner violence than those who marry at an older age. This is especially true when the age gap between the child bride and spouse is large.

“Child marriage marks an abrupt and often violent introduction to sexual relations,” says Claudia Garcia Moreno, M.D., of WHO, a leading expert in violence against women. “The young girls are powerless to refuse sex and lack the resources or legal and social support to leave an abusive marriage.”

A complex issue with deep roots

Child marriage, which has existed for centuries, is a complex issue, rooted deeply in gender inequality, tradition and poverty. The practice is most common in rural and impoverished areas, where prospects for girls can be limited. In many cases, parents arrange these marriages and young girls have no choice.

Poor families marry off young daughters to reduce the number of children they need to feed, clothe and educate. In some cultures, a major incentive is the price prospective husbands will pay for young brides.

Social pressures within a community can lead families to wed young children. For example, some cultures believe marrying girls before they reach puberty will bring blessings on families. Some societies believe that early marriage will protect young girls from sexual attacks and violence and see it as a way to insure that their daughter will not become pregnant out of wedlock and bring dishonour to the family.

Too, many families marry their daughters simply because early marriage is the only option they know.

“Many faith leaders and their communities are already working to end child marriage and other forms of violence against children. Changing stubborn behavior is immensely challenging, so we must go further to positively influence beliefs and actions,” says Tim Costello, Chief Executive of World Vision Australia.

In Malawi, one of the world’s poorest countries, at least half of young women are married before the age of 18. The country is working to end the practice “to allow the girl child to continue with education, to become a learned citizen who can contribute to the development and economy of the country,” says Ms. Catherine Gotani Hara, Malawi’s Minister of Health.

The Minister reports that Malawi has taken a number of steps aimed at ending the practice of child marriage. These include:

Ending child marriage is closely related to UN Secretary-General Ban Ki-moon’s Every Woman Every Child initiative and to efforts to reach Millennium Development Goals (MDGs) 3, 4 and 5 to promote gender equality, to reduce child mortality and to improve maternal health.

The continued occurrence of child marriage has hindered the achievement of these MDGs, especially in sub-Saharan Africa and south Asia.

“I urge governments, community and religious leaders, civil society, the private sector, and families—especially men and boys—to do their part to let girls be girls, not brides,” says the Secretary-General.

Ending child marriage would also help countries achieve other MDGs aimed at eradicating poverty, achieving universal education and combating HIV/AIDS, malaria and other diseases, and should also figure within a renewed development agenda.

“The needs of adolescent girls were overlooked in the Millennium Development Goals; they must have a central place in any new goals set by the international community,” said Lakshmi Sundaram, Global Coordinator of Girls Not Brides. “By using the rate of child marriage as an indicator to monitor progress against new goals, we can make sure that governments address the practice and focus on ensuring the welfare of their girls.”

Strategies for ending child marriage recommended to the Commission on the Status of Women include:

Related News
05/04/2013
Ensuring mothers do not die when giving life
11/02/2013
Abolishing Sang Chatti: Pakistan works to prevent compensation marriage and other forms of violence against women
08/10/2013
In Ethiopia, church bells ring for women and girls
07/01/2019
Getting Fatouma back to school
12/12/2017
Press release: UN Initiative to boost resilience of women and youth in the Sahel through climate-smart agriculture launched at One Planet Summit
END_OF_DOCUMENT_TOKEN_TO_BE_REPLACED