In Ethiopia, church bells ring for women and girls

In northern Ethiopia, 100 religious leaders are speaking in unison, on one issue.

“As a priest, people listen to me and that gives me a position to speak out against gender-based violence,” says Melakesina, priest and head of the Ethiopian Orthodox Church in Kobo district in northern Ethiopia. He is one of the religious leaders who participated in trainings on gender-based violence and are now preaching against violence. 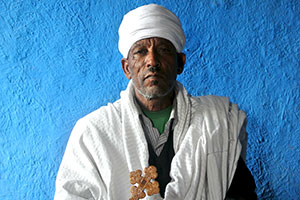 With 45 million members, the Ethiopian Orthodox Church has powerful influence on Ethiopian society. UN Women forged an initiative with the Church in two districts, Woldia and Kobo, in the northern Amhara region. Aiming to reach a broad population, the project involves in-depth training workshops that engage religious leaders to take the lead to end violence against women and girls. At the trainings, the religious leaders learn about the causes and consequences of violence against women and strategies to prevent violence.

There is an urgent need for these trainings. According to population surveys, 68.4 per cent of Ethiopian women think that wife-beating can be justified and many women are unaware of laws against gender-based violence. As a consequence, few women seek support when facing violence.

"The training and the project raised issues that have too long been silenced. One of them is harmful traditional practices,” says Melakesina.

A harmful traditional practice common in Ethiopia is female genital mutilation (FGM). According to Government surveys, around 23 per cent of young girls in the country undergo this practice but the figure varies from region to region. In Amhara region, the figure is a high 47 per cent. 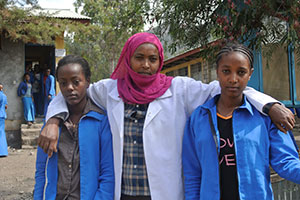 Through the project, the Ethiopian Orthodox Church works to raise awareness on gender-based violence in communities. It supports gender school clubs where students regularly come together to discuss how to prevent violence against women in school communities. Female students at risk of early marriage or those that have fled such a marriage receive financial support to continue their studies.

Through permanent billboards, messages against gender-based violence are being widely spread in the two districts, including in the schools.

“I didn’t dare to tell anyone about the rape. To go to the police was not an option… but now all the women here know. It has given me peace of mind to share with them,” says Kebedech,* a rape survivor from Woldia and a beneficiary of the project. Raped when she was 14 years old when selling snacks on the roadside, today at 28, she is a mother of a 13-year-old son as a result of the rape.

Kebedech and 86 other survivors of violence have also received vocational training through the Ethiopian Orthodox Church. As many survivors find it difficult to gain paid employment, the training supports them and reduces their risk of poverty and further violence.

Related News
31/08/2016
Religious leaders at the forefront of ending gender-based violence in Ethiopia
07/03/2013
Child Marriages: 39,000 Every Day – More than 140 million girls will marry between 2011 and 2020
27/02/2013
In the words of Chi Yvonne Leina: How I stopped grandma from ironing my budding breasts
05/02/2013
In Tanzania, a caravan of activists visits five regions over eight days on a journey to end violence against women
05/02/2013
In the words of Mwasapi Kihongosi: How ending violence against women and girls became my passion
END_OF_DOCUMENT_TOKEN_TO_BE_REPLACED