Bit by bit, cities are becoming safer for women and girls around the world, whether it is the woman vendor at the market in Port Moresby, Papua New Guinea, who is now able to safely sell her wares, or the girl who can now walk the streets of Quito, Ecuador, thanks to a change in the city ordinance on violence against women that now includes sexual harassment in public spaces.

“Women’s voices are also increasingly being heard in local councils and decision-making bodies, and their ideas on how to promote gender-responsive sustainable urban development and meet their needs and rights in this regard are finally finding their way onto the agenda,” says Acting Head of UN Women and Assistant Secretary-General Lakshmi Puri. 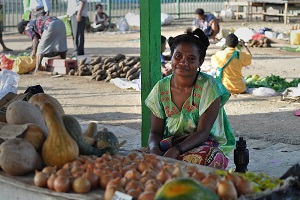 “But much remains to be done to ensure that women can fully exercise their potential as active economic agents of urban development, that they have access to decent and affordable housing and secure tenure and that gender equality and women’s empowerment are acknowledged as both a means and the end in ensuring safe, prosperous and sustainable cities. That’s why UN Women is working closely with UN-Habitat to make that happen.”

UN-Habitat is the United Nations agency for human settlements, which promotes socially, economically and environmentally sustainable towns and cities. During the Sixth session of the World Urban Forum in September 2012 in Naples, the agency signed a cooperation agreement with UN Women to promote gender equality and women’s empowerment in: urban land legislation and governance, urban planning and design, urban economy and basic services, housing and slum upgrading, risk reduction and rehabilitation, as well as in research and capacity-building.

UN Women will equally promote urban and human settlement issues in its work on ending violence against women and girls, peace and security, leadership and participation, economic empowerment, local and national planning and budgeting, human rights and sustainable development.

“The time is now ripe for cities and local governments to put in place gender equality policies, strategies and programmes which promote livelihoods and economic empowerment of women. In this regard, our partnership with UN Women is fundamental to work together on equitable and inclusive cities and ensure women’s prosperity,” says UN-Habitat Executive Director Dr. Joan Clos. “We also look forward to deepening our synergy.”

At the World Urban Forum in Naples, Dr. Clos and Ms. Puri emphasized that urban public space is increasingly becoming a prime arena for the achievement of women’s empowerment and gender equality, which are in turn critical to ensuring safe, smart, prosperous and sustainable cities.

In April, UN-Habitat’s 24th Governing Council adopted a new resolution on “Gender Equality and women’s empowerment to contribute to sustainable urban development”. Drafted with technical assistance from UN Women, and guidance from the Huairou Commission and other leading international women’s organizations, the resolution reaffirms UN-Habitat’s commitment to integrate a gender perspective in all its activities and requested specific policies and programmes to achieve gender equality and women’s empowerment. It acknowledges UN Women’s concrete support to its organizational reform and its gender policy standards, and notes “the importance of cooperation between UN-Habitat and UN-Women on gender equality work and on promoting gender-responsive sustainable urban development.”

The resolution urges greater partnerships with civil society, including grassroots women’s and community-based organizations, and women leaders in the public and private sectors, to build on their knowledge of sustainable and gender-responsive urban planning, governance and housing development. It also calls for optimal use of the Advisory Group on Gender Issues, where 18 members of civil society, Governments and UN Women – the sole representative of UN entities – advise UN-Habitat on how to ensure gender issues are reflected in its work.

The resolution also urges UN-Habitat to align its work with the UN’s system-wide action plan (SWAP) on gender equality and women’s empowerment, which is coordinated by UN Women.

Finally, the resolution calls on national and local Governments to develop and strengthen their policies and programmes on gender equality, to increase civic participation and women’s representation in local governance, to effectively collect data on local governance disaggregated by sex and age, and to eliminate all forms of violence against women and girls through prevention measures and gender safety audits of urban infrastructure and services. It asks for specific attention to women’s and girls’ safety in private and public spaces, as defined in UN-Habitat’s Safer Cities programme, promoted by their Global Network on Safer Cities, and in their partnership with the UN Women Safe Cities Global Initiative.

UN Women also partners with UN-Habitat’s Global Network on Safer Cities, launched in September 2012 during the Sixth session of the World Urban Forum, which advocates for gender-responsive urban safety measures and local crime prevention all over the world.

Around the world, UN Women advocates to influence processes and policies at national and local levels on gender-responsive planning, budgeting, provisioning of urban infrastructure, education, health, transport, decent and affordable housing, water, sanitation; on the prevention of violence against women and engendering of broader urban safety and crime-prevention programmes and security services; to support anti-poverty programmes and; to promote the elections of women mayors and councillors; and to work with urban constituencies such as urban development ministers, city mayors, police, administrators, architects and women’s groups.

UN Women will continue to work with UN-Habitat to develop an engendered programme at the Third United Nations Conference on Housing and Sustainable Urban Development (Habitat III) in 2016 in Medellin (Colombia), and ensure that Gender Equality and Women’s Empowerment in sustainable development is strategically placed throughout the main outcome document: the ‘New Urban Agenda” for the 21st century.

Speech: Reclaiming Public Spaces for the Empowerment of Women and Girls

Q&A with Mayor of Quito, illustrating the Safe Cities programme

Deputy Executive Director, UN Women, Lakshmi Puri speaks at the joint opening of the Gender and Youth Assemblies at the World Urban Forum

Related News
14/10/2016
Putting gender equality at the heart of the New Urban Agenda
28/10/2013
In cities, efforts to make public spaces safer for women and girls
06/05/2013
Better lighting, wider pavements: steps towards preventing sexual violence in New Delhi
07/03/2013
Speech by Michelle Bachelet : Reclaiming Public Spaces for the Empowerment of Women and Girls
20/02/2013
Opening remarks of Michelle Bachelet at the 8th Forum of the World Alliance of Cities against Poverty (WACAP) “Smart, Safe and Sustainable Cities”
END_OF_DOCUMENT_TOKEN_TO_BE_REPLACED