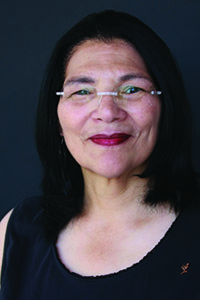 In light of the Olympic Day on 23 June, introduced in 1948 to commemorate the creation of the modern Olympic Games on 23 June 1894 in Paris by Pierre de Coubertin, UN Women talks to Anita L. DeFrantz, United States Olympic medalist, member of the International Olympic Committee (IOC) and Chair of the IOC Women and Sport Commission. She is also the President of the LA84 Foundation, which is managing southern California’s endowment from the 1984 Olympic Games.

Ms. DeFrantz, you are a great advocate of using the power of community-based sports to transform the lives of youth. How can sport be a tool to empower women and girls, particularly in developing countries?

UN Women recently signed a partnership agreement with the IOC, which will promote women and girls’ participation in sport and their empowerment through sport, and encourages advocacy, education and field-level activities at country levels. Why this collaboration?

Sport is a worldwide phenomenon and yet only a fraction of girls and women in the world have access to taking part in sport. The Olympic Movement is based on the concepts of fair play and mutual respect. It is essential to the Olympic Movement that we respect both sexes and provide opportunity for both to take part in sport. With the UN as the main international intergovernmental organization, we can work to help all of the nations of the world provide sport to their citizens.

Now that every National Olympic Committee has supported women and entered women as a part of their Olympic Teams, we can work to make certain that access to sport is truly available to children in every nation. From the basic principle of inclusion great work can be accomplished.

The 2012 London Games were the first Olympic Games where every participating country had women on their teams. It was also the first time that we were able to watch women compete in every sport on the Olympic programme. The U.S. Olympic Team – your team – even included more women than men for the first time in history. How do you explain this evolution and how do think this will shift going into the 2014 Sochi Games and the 2016 Rio Games? 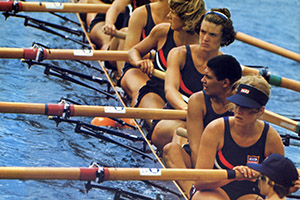 Anita DeFrantz (second from the bottom) with the U.S. Rowing Team at the 1976 Olympic Games in Montreal, where she won the bronze medal in women’s eight.
Photo: LA84 Foundation

The increased number of women at the London Olympic Games is the result of specific work to achieve this goal over the last 16 years. The IOC Women and Sports Commission gave advice to the IOC Executive Board and the Session on how important it was to achieve certain goals and showed how to achieve them. Given the stated purpose of the Olympic movement, it is logical that we should have an inclusive approach to this celebration of human excellence, which is how I define the Olympic Games.

The Olympic Winter Games are significantly different, given that there are so few sports that are competed on ice and snow. The total number of athletes is less than 3,000, compared to the Olympic Summer Games with 10,500. The addition of ski-jumping as a discipline for women in skiing means there is only one discipline left on the Winter programme, [which is] Nordic-combined, in which women don’t compete. That should bring the total number of women and men to be quite close at the Sochi Olympic Winter Games in 2014.

You became the first woman Vice-President of the IOC Executive Committee in 1997. Yet, the number of women within the leadership of the IOC and the different National Olympic Committees is still so low. What is the best strategy to address this and what is the role of the IOC Women and Sport Commission in this respect?

We need the tradition of women giving back to the national sports organizations, to the National Olympic Committees and to the international sports federations. For the first 80 years of the Olympic Movement, the number of women competing was limited. Women were accepted, but not very welcomed within the leadership of the sports movement. Now, we certainly have reached a critical mass of women who have competed at the Olympic Games. From 1900 to 1984, just over 12,000 women competed at the Olympic Games. From 1988 to 2012, the number of competitors reached over 25,000. We need to make certain that women give back by taking on roles in governance. It is still primarily volunteer work and it is not easy to set aside the time and finances to undertake this work. Nevertheless, women’s taking on responsibility in the governance of sport is the critical element for the future of sport.

The IOC Women and Sport Commission has advised that it is important to provide training on the skills of standing for office and negotiating for support. Those training sessions have been successful and will continue to be presented throughout the world. We continue to support the understanding that decision-making boards that have diversity make better decisions. Good governance requires the involvement of both women and men.

What is your hope for the future of women in sport and the impact on future generations of girls? 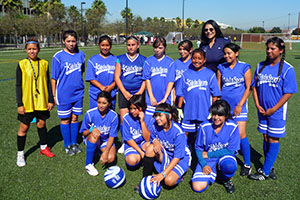 Anita DeFrantz (final row) with participants from the Kids In Sports (KIS) project, created by the LA84 Foundation, during a girls’ football event in Los Angeles in 2011. KIS offers year-round programmes at sports clubs throughout Los Angeles, and has grown a girls’ programme from 300 to more than 3,000. Anita DeFrantz was President of KIS from 1994 to 2012 and remains a Board member.

I believe that the future of the world of sport is bright so long as women have a leadership role at every level. It is essential that we break the psychological barriers that suggest only males can govern in sport. It is only a psychological barrier and yet until it is broken, it remains an historical truth.

We need to work together as a team to make the needed changes. And that is why the team experience is as important for little girls as it is for little boys. Sport teams provide training in skills we need in the game of life. The more practice we have at that, the better players we will be!

Related News
Girls speak out at the First African Girls' Summit on Ending Child Marriage
Statement by UN Women Executive Director Phumzile Mlambo-Ngcuka for International Day of the Girl Child, 11 October 2015
Malawi Chief annuls 330 child marriages
Sport paves the way for skills and jobs for young mothers in Brazil
“People are beginning to see our potential…the potential of all the girls who play sport”
END_OF_DOCUMENT_TOKEN_TO_BE_REPLACED