“Before, women’s perspectives were not taken into account in the planning and budgeting process,” says Melkam Embiale, representative of the women of Yefag kebele (ward), the smallest administrative unit in Ethiopia located in the Libokemkem district to the north. “[But now] if they do not allocate enough budget for women’s issues, we will question them.” 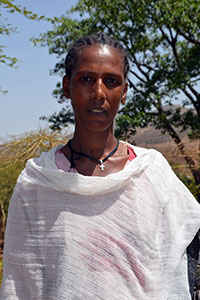 She is one of 30 community members who were trained in gender-responsive budgeting by the NGO, Poverty Action Network of Ethiopia (PANE), supported by UN Women. Gender-responsive planning and budgeting ensures that both men and women beneficiaries have a say as to how resources are used. Using this methodology, Melkam and other community members now analyse the governmental plan and budget for their kebele to make sure that the needs of both women and men are prioritised and that they benefit equally.

One issue that the women in the kebele feel strongly about is water. In the rural areas of Ethiopia, estimates show that only 36 per cent have a source of drinking water, which is within a 30-minute walk, while for others it’s much further. This has a direct impact on the women and girls responsible for collecting water in 86 per cent of households in rural Ethiopia, according to a 2011 Ethiopia Demographic and Health Survey. Carrying heavy buckets of water, through isolated muddy paths, women and girls often face the threat of sexual violence.

In Yefag kebele, which is home to around 3000 people, there are 11 water spots and a committee is responsible for managing each spot, which includes deciding on its location, design, access and maintenance fees, among other factors.

“Before, almost all committee members were men and they did not understand our perspective as they do not carry the water,” explains Melkam. Through the process of analysing the plan in the kebele, the women have now managed to secure three out of seven seats in every water committee. “The selected women push for our agenda, which is to construct the water spots closer to the village,” says Melkam.

“The fact that women decide over water resources is a best practice. In Yefag kebele, gender budgeting is impacting the lives of people at the local level,” says Julius Mukunda, Gender-Responsive Budgeting Specialist, UN Women.

Following a visit to Yefag kebele, he noted two important developments in the community: the gendered division of labour and the local community having access to information on the Government’s plan and district-level budget.

“In this kebele I have heard senior male leaders discuss the problem of gendered division of labour. Both leaders and community members seem to understand the importance of discussing and analysing women’s role in the economy. That kind of awareness is unique and crucial if we want to overturn the patriarchal structures,” Julius says.

At the local level, the PANE-led project has implemented gender-responsive budgeting with community involvement in two kebeles, with plans to extend to two more in the district of Libokemkem. In the coming weeks, the PANE-UN Women project will also begin training women’s groups to work with gender-responsive budgeting, so that they can push for a gender perspective to be applied in district planning and resource allocation. 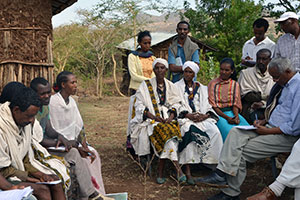 The project also targets decision-makers at the senior administrative level, with 126 people trained in four districts in different parts of Ethiopia. Through these efforts in Libokemkem, the district administration has involved the community in reviewing plans for their kebeles in agriculture, health, education and water sectors. Community representatives are invited to evaluate the plan from a gender perspective, and give feedback, which is taken back to the district. At the district level, an action plan is developed to close the gaps and ensure that the whole community benefits. In the future, they plan to include the community in planning in other sectors as well.

The Head of the Women, Children and Youth Affairs Bureau in the district, Yalega Gebresilassie is satisfied with the early results. “It has empowered communities to question the implementation of the plans and it has linked Government’s priorities with the community; and that leads to accountability,” she says.

The community women who received the training now mobilize other women in the kebele, empowering them and building their capacity. Women’s access to credit has increased and health services for pregnant women have also improved at the kebele.

But the women in Yefag kebele want more. They want greater participation in the planning and early on in the budgeting process. They also want to look beyond their local community, and be engaged in district-level planning from the very beginning, when budget allocations are set.