On the second day of the Third Financing for Development Conference, taking place in Addis Ababa, Ethiopia from 13-16 July 2015, UN Women organized three official high-level side events to highlight the importance of transformative financing on gender equality and women's empowerment. 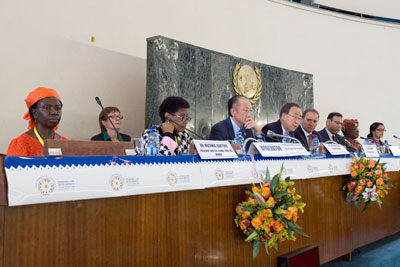 “By 2030 there must be complete 50:50 gender equality. Let’s commit today”, the Secretary-General emphasized in his remarks. He reminded participants that the Sustainable Development Goals (SDGs) can only be achieved with an “equally ambitious financing agenda” that benefits all.

“We know based on evidence that gender equality is not only a condition for social justice but a power that can bring about social justice,” said World Bank President Jim Yong Kim.

The Prime Minister of Sweden said 2015 is the year to “close the gap between talking and doing … I challenge all actors involved in the SDGs to support Gender-Responsive Budgeting. It is a joint challenge and it is an opportunity.” 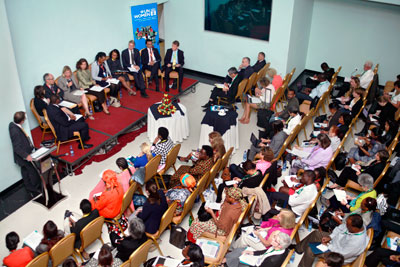 The second UN Women official side event “Transformative Financing for Gender Equality and Women’s Empowerment- Catalyzing Action on the Addis Ababa Accord”, attended by UN Women Deputy Executive Director Lakshmi Puri, provided an opportunity for Member States and partners to share examples of implementing gender equality, ranging from policies, to laws, programmes, the allocation of resources as well as the need to track spending and impact of those for women and girls.

“We need money, and we need smart money”, stressed Justine Greening, Secretary of State for International Development of the United Kingdom, on the importance of catalyzing actions in Addis Ababa and beyond. To achieve gender equality, she said targeted actions and concrete commitments are needed.

Meanwhile, Claver Gatete, Minister of Finance and Economic Planning from Rwanda, stressed that new structures and systems cannot succeed without changing mindsets and perceptions. Participants called for intensified efforts on gender-responsive budgeting and endorsed an Action Plan for Transformative Financing for Gender Equality and Women’s Empowerment. 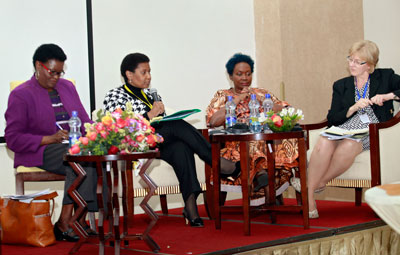 At the “Financing for Gender Equality: Placing Women at the Centre of the SDGs in Africa” on 14 July, an interactive panel discussion involved policymakers from Ministries of Finance, Ministries of Gender as well as other development partners and UN agencies. Photo: UN Women/Binyam Teshome.

The last UN Women official side-event of the day “Financing for Gender Equality- Placing Women at the Centre of the SDGs in Africa” contextualized the discussions on transformative financing for women’s empowerment, bringing together stakeholders from government, the UN system, and civil society organizations to discuss innovative ways for financing gender equality.

Giovanie Biha, Deputy Executive Secretary of UNECA, stressed that Africa’s transformation “relies on the potential of its people, especially women and girls.” Noting that gender will be mainstreamed in 11 out of the 17 goals of the SDGs, with one goal dedicated to gender equality and women’s empowerment, she said: “Our hope today is that Member States will invest more and invest well, with targeted and early interventions, with policies and adequate resource allocation.”

Zenebu Tadesse Woldetsadik, Ethiopia’s Minister of Gender, Women, Children and Youth Affairs outlined her government’s strides in increasing women in parliament and its 5-Year Growth and Transformational Plan, in which gender is a critical stand-alone goal.

Highlighting the critical role of adolescent girls in Africa’s transformation, UN Women Executive Director Phumzile Mlambo-Ngcuka stressed the need to continue investing in education and garnering political will: “We have enough human capital, but we need political will and the determination of our leaders.”

Throughout the day, speakers and panelists agreed that frameworks and commitments are important; however, these must be put into action through transformative and adequate resources, while tracking spending and impact.