Emerging from the Third Financing for Development Conference (FFD3), which ended today in Addis Ababa, Ethiopia, was a clear recognition of gender equality as a critical element in achieving sustainable development. During the conference, UN Member States adopted the Addis Ababa Action Agenda (AAAA), a global framework for financing for sustainable development, committing to action to achieve economic, social and environmental changes by transforming global finance practices. 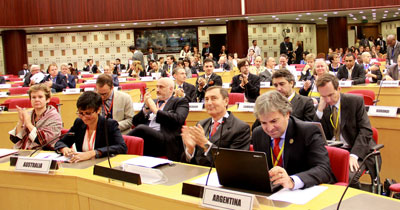 Delegates applaud the adoption of the Addis Ababa Action Agenda at the Third Financing for Development Conference which concluded on 16 July. Photo: FFD3/Shari Nijman

In particular, States committed to “ensure gender equality and women’s and girls’ empowerment,” hence reaffirming that this goal and the full realization of human rights are essential to achieving sustained, inclusive and equitable economic growth and sustainable development. UN Women intensely engaged in the negotiations of the AAAA, advocating for the inclusion of transformative financing for gender equality, which includes upscaling of resources for the implementation of gender equality commitments and strengthening support for gender equality and women’s empowerment institutions. UN Women will now work with a group of Member States to implement an Action Plan on Transformative Financing for Gender Equality and Women’s Empowerment, to ensure that the gender commitments that were included in the agreed text will be turned into actions.

During her four-day mission to FFD3, UN Women Executive Director Phumzile Mlambo-Ngcuka contributed to official sessions such as the official opening and as a panelist on Roundtable 2 on “Ensuring Policy Coherence and an Enabling Environment at all Levels for Sustainable Development” [watch the archived webcast] as well as several other meetings and side events. In order to promote enhanced gender-responsive planning and budgeting and targeted investments towards gender equality institutions and programmes, the Executive Director engaged with key government officials and stakeholders. In all meetings she emphasized that the inclusion of gender-responsive financing in the AAAA is critical if sustainable development was to be achieved for all.

UN Women organized three high-level side events with key stakeholders to join forces in harnessing support for strong gender equality commitments in the AAAA and UN Women Deputy Executive Director Lakshmi Puri launched the Action Plan on Transformative Financing for Gender Equality and Women’s Empowerment with a select group of Member States. She also spoke at the UN-Women-supported Women’s Forum and the Civil Society Forum 10-12 July, emphasizing the important role of civil society in influencing global agreements and keeping their governments accountable, saying: “we have to work together to push our common agenda forward”. At the start of the conference, Ms. Puri contributed to a side event linking financing of gender equality to human rights and economic justice, and a side event organized by the Global Migration Group on remittances and the contributions of the diaspora to financing sustainable development. 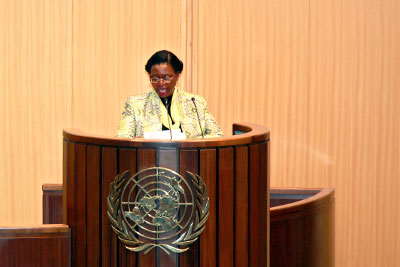 “With these tools, we know WHAT needs to be done and HOW it can be done,” said Letty Chiwara, UN Women Representative to Ethiopia, the African Union and UNECA, as she delivered UN Women’s statement at the plenary on 16 July 2015. [watch the archived webcast] “New and existing commitments on gender equality require unprecedented and transformative financing, in scale, scope, ambition and quality, from all sources and at all levels.”

Throughout her meetings, UN Women’s Executive Director emphasized the AAAA as a critical element to move from policy to practice. “We need to move from side events to the plenary. From Women's Ministries to the responsibility of Heads of States,” she stated during the International Business Forum on 14 July.

While the AAAA is a key document for the implementation of the SDGs, the Executive Director stressed that previous commitments are already in place. In the Political Declaration adopted this year in March at the 59th Commission on the Status of Women, Member States pledged to take concrete action to accelerate implementation of the Beijing Declaration and Platform for Action through significantly increased investment to close resource gaps, including through domestic resources and official development assistance.

Ms. Mlambo-Ngcuka emphasized that UN Women, starting from the 60th session of the Commission on the Status of Women, will start tracking progress on the implementation of the SDGs, the AAAA, as well as all other relevant commitments in order to achieve Planet 50:50 and “ban the term gender inequality by 2030”.

Related News
16/07/2015
“With these tools, we know WHAT needs to be done and HOW it can be done” – UN Women closing statement at FFD3
14/07/2015
UN Women steers three high-level side events at the Financing for Development Conference
14/07/2015
The expectations of an ambitious post-2015 development agenda must be matched with transformative financing for gender equality – Lakshmi Puri
10/07/2015
UN Women Deputy Executive Director: Only through a transformative financing for gender equality agenda, the commitments for the post-2015 will become a living reality
01/08/2013
In Ethiopia, rural women improve their lives, befriending budgets
END_OF_DOCUMENT_TOKEN_TO_BE_REPLACED