Beaming with pride and excitement, Fanny Chirisa was among the 124 women sworn-in on 3 September as new Members of Parliament (MPs) in the 8th Parliament of the Republic of Zimbabwe. A long-time women’s activist, she said she hopes to use her knowledge and experience to familiarize other MPs with the gender equality and women’s rights priorities that will make a difference to women’s lives.

“I know what these issues are and I know where to go to get information and support from the women’s movement,” said Chirisa, a first-time MP for Manicaland Province in the eastern part of the country. 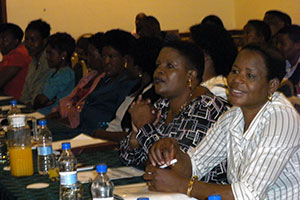 Women MPs in the 8th Parliament of Zimbabwe and members of civil society gathered on 4 September 2013 to honour female candidates who participated in the 2013 elections. Photo: UN Women/Patricia A. Made

Women’s representation in Parliament more than doubled from 17 per cent following the 2008 general elections, to 35 per cent in the elections on 31 July 2013. Zimbabwe now joins the ranks of the more than 30 countries worldwide that have used a special electoral quota system to increase women’s representation in Parliament to at least 30 per cent, which is considered the minimum for collective action.

The quota is included in Zimbabwe’s new Constitution, which was approved by referendum in March and signed into law on 22 May 2013. It was widely celebrated after a decade-long struggle, which UN Women and UNDP supported through a constitutional lobby group. The special measure reserves 60 seats for women to be elected through a system of Proportional Representation, based on the votes cast for political party candidates in the lower house (National Assembly). For the 60 elected Senate seats, women and men candidates are listed alternately, with every list headed by a woman candidate.

As a result, women now comprise 124 of the 350 MPs in Zimbabwe’s new Parliament, including 86 women in the National Assembly – 60 in the reserved seats and 26 elected directly to the 210 constituency seats.

“I want to bring about a change in the livelihoods of the people in my constituency and my focus will be on the three areas of social, community and economic development,” said MP Iris Chiratidzo Mabuwa, who won a constituency seat. Having worked with the International Labour Organization for nearly two decades, she added: “Bringing the global Millennium Development Goals agenda to the constituency-level to empower women, youth and other vulnerable groups… is one of my goals.”

The use of the special measure also led to 37 women candidates being elected to the Senate, and one woman was selected to one of the two Senate seats allocated for people living with disabilities, bringing the total number of women to 38 – an unprecedented 47.5 per cent of the 80 Senators.

But women’s activists say the struggle for meaningful political participation is far from secure.

“It was a dog-eat-dog election and … women were pushed towards the 60 seats and told to vacate the competitive seats for men. It was not unusual for women to be told ‘we gave you 60 seats, what more do you want?’” explained Netsai Mushonga, national coordinator of the Women’s Coalition of Zimbabwe.

The temporary measure will be in effect for the first two Parliaments elected after the Constitution came into effect (2013 and 2018). As a result, women activists know that they must work with the new women Parliamentarians to secure the gains made and prepare for 2018.

“These women [in the 60 reserved seats] must now convert these seats into a serious political presence and interventions. Since they do not have constituencies, they must develop initiatives to get a profile over the next five years among women and men, and they must work to become highly competent politicians,” said Julie Stewart, Director of the Southern and Eastern Africa Regional Centre for Women’s Law at the University of Zimbabwe, who is also a member of the UN-Women-supported Group of 20 (G-20) lobbying group, which successfully advocated for the inclusion of the strong gender equality and women’s rights provisions in the new Constitution.

The G-20 and the women’s movement, Stewart said, must strengthen the capacity of the new women MPs to mainstream women’s issues into all the broader issues that will be discussed in the new Parliament and ensure that gender equality and women’s rights in the new Constitution are secured through law reform.

Grace Ruvimbo Chirenje, coordinator of the Zimbabwe Young Women’s Network for Peacebuilding, agrees: “We want the women in the reserved seats to not be just chess pieces being moved by the men in their political parties. We want to enable them, and all women, to become the chess players.”