(New York) — With the worst levels of displacement since the Second World War, UN Women Executive Director Phumzile Mlambo-Ngcuka today at the UN Security Council called upon UN Member States to address the violent extremism that is on the rise and threatens the lives and futures of women and girls worldwide. 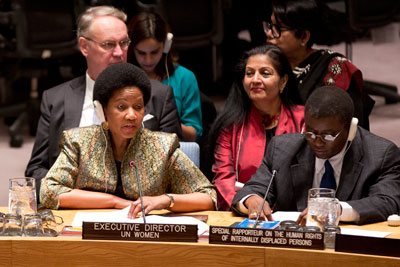 Presenting the UN Secretary-General’s Report on women, peace and security, she emphasized a shift in the nature of conflict, from Iraq to Mali, whereby women and girls are being specifically targeted by extremists. Ms. Mlambo-Ngcuka further called attention to the fact that displacement is exacerbating conflicts and is compounded by the number of ongoing crisis situations, including in Afghanistan, Central African Republic, South Sudan and others. She highlighted the need to accelerate efforts to achieve gender equality, saying “…empowered women are the best hope for sustainable development, following conflict.”

The crises in Afghanistan, Syria, and Somalia created more than half of the 10.7 million persons displaced by conflict or persecution in 2013. The theme for this year’s Security Council Open Debate therefore focused on the situation of women refugees and displaced persons around the world. Next October, the Security Council will conduct a High-level Review of the women, peace and security agenda. In his message to the Council, the UN Secretary-General welcomed the Global Study on the implementation of resolution 1325, led by a high-profile Advisory Group, which will inform next year’s Security Council debate. 2015 marks the 15th anniversary of the adoption of resolution 1325, the 20th anniversary of the Beijing Declaration and Platform for Action, and the start of a new global development agenda building on the Millennium Development Goals.

It is an honour to address the Security Council, and to present the Secretary-General’s Report on women, peace and security.

I thank the Presidency of Argentina for hosting this debate, and for highlighting the challenges faced by displaced women.

This is especially timely as we witness the worst levels of displacement since the end of the Second World War.

In my first year as Executive Director of UN Women, I travelled to displacement camps in South Sudan and Central African Republic, and the Syrian refugee camps in Jordan.

Without fail, at every stop, I was inspired by women peacebuilders – working so hard in very dangerous conditions.

Ms. Suaad Allami, a leading women’s rights advocate from Iraq, will speak on their behalf today and on behalf of displaced and refugee women everywhere.

As we look around at a world in crisis, there is a sense that we are experiencing not simply an increase in violence and insecurity, but a shift in the nature of conflict itself.

In more and more parts of the world – Iraq, Northern Nigeria, Syria, Somalia, and Mali, to name a few – violent extremists are taking control of territory, and directly threatening and targeting women, girls, and their communities. This is the terror that contributes to the high levels of displacement we are discussing today.

Women and girls are forced to “marry” their abductors and rapists or sold as slaves.

Human rights defenders are threatened and killed for speaking out against abuse.

Courageous journalists are silenced by violence.

And key decisions are still made behind closed doors, deaf to the voices of those directly affected.

Last week, we greeted reports of possible progress regarding the abducted Chibok girls with cautious hope.

This week, our hopes were devastated by news that they are yet to be released.

And, that in the days since, more young girls have been taken.

We must not forget why these girls are targeted, or the horrifying nightmare they, and so many others, continue to endure.

During and after conflict, more women die during childbirth, and more girls are forcibly married.

Fewer women work and participate in the economy, and less girls go to school. Of primary school age children that are out of school, half live in conflict areas. Only 35 per cent of girls are enrolled in secondary education in these settings.

This puts us all in danger.

The report of the Secretary-General, which I have the privilege to present to you today on his behalf, recognizes advancements made at the normative level over the past year.

It reaffirmed the critical importance of women’s empowerment and gender equality to international peace and security.

Through regional or national action plans, over 80 countries have committed to the women, peace and security agenda. Regional organizations are increasingly appointing high-level envoys dedicated to this issue.

In this respect, I particularly want to welcome the appointment of long-time champion for women Bineta Diop as the African Union’s first special envoy on women, peace and security.

The report shows that women’s participation and representation in conflict resolution and peace processes has improved. Of the 11 active negotiations co-led by the UN last year, eight included at least one senior woman among negotiating delegates.

The percentage of peace agreements that commit to advancing the security and status of women and girls has more than doubled since 2011.

In the ongoing Colombian peace talks, more than one-third of negotiators are women, and a committee dedicated to gender has been established.

These gains are remarkable. However, this still leaves us with nearly half of all peace agreements that say nothing about women’s rights or needs, and a majority of peace processes where women’s minimal presence is an afterthought.

But 97 per cent of military peacekeepers are still men.

There is now a broad understanding of the importance of women’s economic empowerment in post-conflict settings.

But peacebuilding and recovery funding still largely ignores women’s economic role, and under-invests in their livelihoods.

The report also features a recently launched Secretary-General’s Guidance Note on reparations for survivors of sexual violence. This has been a neglected area in our agenda.

Reparations are not just about justice. They are about empowerment.

And empowered women and girls are the best hope for sustainable development following conflict.

They are the best drivers of growth, the best hope for reconciliation, and the best buffer against radicalization of youth and the repetition of cycles of violence.

We see this clearly in Malala, recipient of this year’s Nobel Peace Prize.

This combination of events is an unmissable opportunity to integrate the women, peace and security agenda into broader development efforts.

Next October, the Security Council will conduct a High-level Review of the women, peace and security agenda.

This will be informed by the Secretary-General’s Global Study on the implementation of Resolution 1325, and UN Women is proud to be its secretariat.

In fact, I am pleased to recognise the study’s distinguished lead author, Radhika Coomaraswamy.

She is here with us today, as well as several members of the high-level advisory group, who have flown from all over the world to join us for this week. We are grateful for their time and dedication.

They will together examine progress and challenges in implementing UN SC resolution 1325.

Today’s debate provides an opportunity for members of the Security Council – and others – to share their assessment.

It is a chance to renew our commitments to the women, peace and security agenda as the global security context shifts.

Before I conclude, let me touch again on today’s topic.

Crises in Afghanistan, Syria, and Somalia created more than half of the 10.7 million persons newly displaced by conflict or persecution in 2013. The total displaced population now exceeds 51 million.

During the height of the violence in Gaza earlier this year, almost one third of the population was internally displaced. Nearly two million people have been displaced by ongoing crises in Central African Republic and South Sudan. New displacements have been caused by protracted conflicts like in the Democratic Republic of Congo, and new ones, like in Ukraine.

The rights, needs, protection, and participation of displaced women and girls have been a Security Council matter since the adoption of Resolution 1325 in the year 2000.

In subsequent resolutions, and in international and regional human rights and humanitarian law, it is stated again and again:

The meaningful participation of women in decisions that affect their lives is essential to create resilient communities.

“If we exclude women from peacebuilding and post-conflict reconstruction, we will build unbalanced structures, and they will fall.”

Yet efforts to empower women with leadership, training and education – and access to land and other productive assets – are still marginal.

Displaced women are often excluded from justice systems, and investments to fix this are still insufficient.

The Security Council noted in resolution 2122 that:

Unequal citizenship rights and asylum processes, and a lack of access to identification, increases women’s risk of statelessness.

They suffer exclusion from decision-making and unequal access to education, health, housing, land and property rights.

It is time to dramatically improve the situation of women refugees and displaced persons around the world.

It is time to renew our commitments and see them through.

As we review policies and strategies over the coming months, we should be clear about what sustainable peace and development require.

This Council is facing extraordinary challenges, from the Ebola outbreak to the rise of violent extremism and unprecedented levels of displacement. We will not overcome these challenges without putting gender equality at the front and centre of our efforts to maintain peace and security. That is this Council’s obligation, and our collective test for 2015.

On behalf of UN Women, I welcome today’s debate, and look forward to keeping our promises to all women and girls threatened by conflict and violence.

Related News
15/06/2022
Speech: Let’s put an end to ‘Where are the women’?
08/03/2022
Speech: We must give peace a chance
17/12/2015
Joint Statement by Phumzile Mlambo-Ngcuka and Zainab Hawa Bangura on the signing on 15 December 2015 of the agreement on conflict victims between the Government of Colombia and FARC-EP
01/12/2015
In the words of Julienne Lusenge: “Women are the first victims of war” in the Democratic Republic of the Congo
29/10/2015
Our focus should not just be on what women can do. It is also on what men can do — Executive Director
END_OF_DOCUMENT_TOKEN_TO_BE_REPLACED