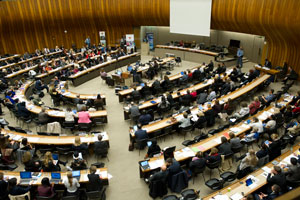 Geneva — Government representatives of UN Economic Commission for Europe (UNECE) Member States, experts, academics, and members of international, civil society and private sector organizations gathered in Geneva from 6-7 November to review progress towards the the Beijing Declaration and Platform for Action, the most comprehensive plan for advancing women’s rights, in the lead-up to its 20th anniversary. The goals laid out in the Beijing Declaration have also served as a catalyst to the global Beijing+20 advocacy campaign.

“On our current trajectory, it will take another 81 years to reach equality. This is a wake-up call. Even where we are doing best, progress remains uneven, and discrimination against women continues in law and in practice in ECE countries,” said Ms. Mlambo-Ngcuka, in her speech to the group of over 500 participants.

Princess Mary of Denmark urged governments to make gender equality a robust goal in the post-2015 agenda and ratify the Istanbul Convention, calling it a “milestone for ending violence against women.”

Mr. Friis Bach emphasized the disproportionate impact of the economic crisis on women saying that it has “hampered efforts to fight violence against women and reduce inequalities,” in the ECE region. “Women’s rights should be at the centre of sustainable development,” he added. 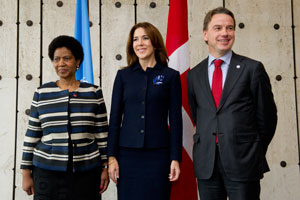 For two days, regional actors addressed key areas of progress and challenges in the implementation of the Beijing Declaration, discussed solutions and ideas to overcome outstanding gaps and disparities, and exchanged best practices in policy and action. Some of the challenges highlighted were the gaps between legislation and implementation in all areas of the Beijing Declaration, the prevalence of violence against women, insufficient sex-disaggregated data, lack of funding for action plans and other initiatives, the low participation of women in the labour market and the disproportionate and negative effect of the financial crisis on women.

The concluding recommendations were clustered under five focus areas:

The importance of ratifying the Istanbul Convention, as well as adopting and putting into motion the provisions of the Convention on the Elimination of All Forms of Discrimination against Women (CEDAW) and UN Security Council resolution 1325 were also stressed, as was the need for a robust, stand-alone goal for gender equality in the post-2015 agenda.

The regional offices of UNDP, UNICEF, UNFPA, ILO, WHO and FAO substantively contributed to the meeting, which was preceded by the Geneva NGO Forum that delivered key recommendations to the intergovernmental review.

UN Women’s Executive Director met with young women leaders at the sidelines of the meeting, listened to their concerns about their future, shared her own experiences and delivered the message that they are the future of the women’s rights movement, the ones to break the barriers facing women and girls everywhere.

The conclusions of the meeting will feed into the global review of the implementation of the Beijing Platform for Action at next year’s fifty-ninth session of the Commission on the Status of Women in New York.

Read the outcome statement from this review, here.