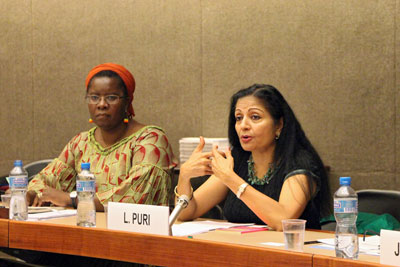 Geneva - A diverse group of 700 participants from 56 countries of the United Nations Economic Commission for Europe (UNECE) region gathered from 3-5 November to review progress made in the region on the Beijing Declaration and Platform for Action nearly 20 years after its adoption. The Beijing Declaration, signed by 189 countries, is widely known as the blueprint for women’s empowerment, and focuses on 12 critical areas of concern, from women and the environment to ending violence against women.

“Beijing+20 has given the international community the unique opportunity to reflect upon progress made and identify remaining challenges and strategies for moving forward,” said UN Women Deputy Executive Director Lakshmi Puri speaking at the forum. “This reflection will be voiced and will influence the definition of the next development framework we know as the post-2015 agenda. We also must make Beijing+20 a game-changer for the women’s rights agenda."

The review was held not only to discuss achievements in gender equality legislatively and culturally, but also to deliver key recommendations to feed into the intergovernmental Beijing+20 Regional Review Meeting from 6-7 November. Numerous roadblocks were discussed surrounding women’s human rights, poverty and economic development and the lack of equality sometimes found in Europe and Central Asia. 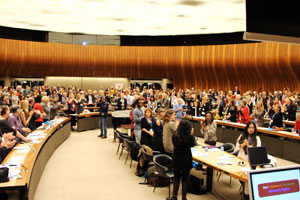 Women applauding the statement made regarding advancing gender equality in the region. Photo: NGO CSW/Giancarlo Fortunato

“We have heard over and over again throughout the last two days that anti-gender equality ideology and social conservatism is on the rise in Europe and Central Asia. If we are not alert and active as women’s rights defenders, these conservative tendencies can turn the tide of the women’s movement and the progress made over many years,” said Ingibjorg Gisladottir, UN Women Regional Director for Europe and Central Asia.

The NGO Forum delivered its recommendations in ten cluster areas to the Chair of UNECE, Mr. Reinout Vos, Deputy Permanent Representative of the Permanent Mission of the Kingdom of the Netherlands. They put forward a declaration calling for: implementation and resourcing of all women’s rights agendas with effective accountability and monitoring mechanisms; a stand-alone goal on gender equality and women’s rights in the post-2015 agenda; women’s equal access to all resources; investment in women’s and girls’ rights, including sexual reproductive health and rights; and an end to violence against all women and girls, particularly ending child early and forced marriages.

“Women want doors in which they can walk with confidence. We have come together and reclaimed the spirit of Beijing+20. We must celebrate our diversities and push forward in solidarity,” said Nyaradzayi Gumbonzvanda, President of the NGO Committee on the Status of Women, Geneva, in conclusion of the forum.

The outcome document puts a particular emphasis on how the convergence of multiple crises, such as the financial crisis of 2008, and subsequent austerity measures have had a disproportionate impact on women and girls and may have led to difficulties in governance and the resurgence of traditional roles for women.