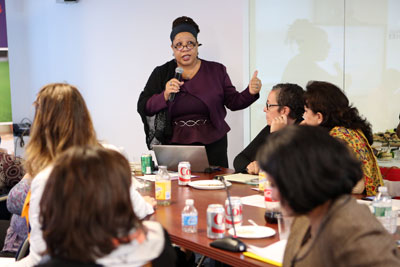 Over 50 civil society leaders from around the world met to discuss priorities for implementing the Sustainable Development Goals. UN Women/Sarah Stacke

Civil society thought leaders from all over the world participated in a meeting convened by UN Women in New York to identify key priorities for working together to implement the Beijing Platform for Action and the imminent Sustainable Development Goals (SDGs), in particular Goal 5 on gender equality. 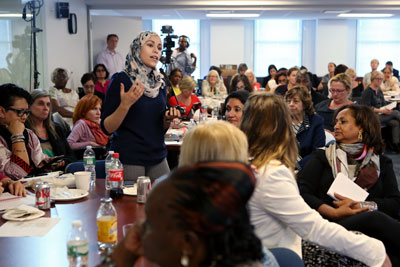 Over 50 representatives from global, regional and national civil society organizations reflected on how to ensure that the commitments to the SDGs are implementable at the national level and how government and international institutions need to be held accountable on their gender equality obligations.

Discussions included a long list of topics: from social protection, revoking discriminatory laws and ensuring equal pay for women, to approaches to deal with extremism and its consequences, including humanitarian emergencies. 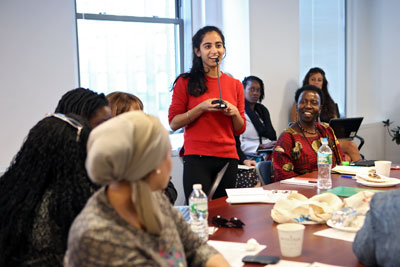 A call shared by many participants was a stronger recognition of the contribution of women’s organizations to progress on gender equality and women’s rights, particularly in the current situation when a number of governments are introducing regulations to limit the work of NGOs.

For UN Women to take the lead in reclaiming feminist and rights language as a tool for advancing the equality agenda was one of the proposals supported by many participants. UN Women Global Civil Society Advisory Group member and prominent gender equality advocate Charlotte Bunch said that organizations need to be forward-thinking in their use of language and to make it bolder.

“I would suggest that in addition to talking about ending violence against women … we talk about making violence unacceptable,” she said. “If we make what is happening unacceptable then we have shifted the cultural attitude towards it, which I think is the most important [step] towards ending it.” 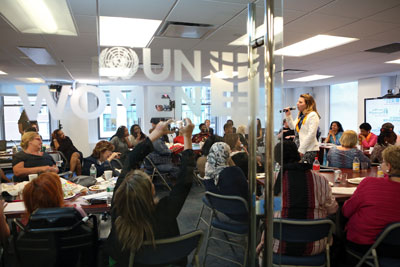 Civil society representatives discussed the importance of working with young people on the 24 September in New York. UN Women/Sarah Stacke

Working more systematically and consistently with young people and non-traditional partners, such as faith-based organizations was also proposed by participants. Hannah Stanton, a youth delegate for the World Association of Girl Guides and Girl Scouts said that girls don’t want to be ‘beneficiaries’ of this agenda. “We want to drive it, we want to be the agents of change and we want to do it with you, together.”

Last but not least, financing to implement the development agenda was discussed as a key issue. Participants said governments and philanthropists finance their own priorities, which do not always coincide with the gender equality agenda, noting that this was about choices and prioritizations. The meeting was part of a series of regional and national consultations held over the past two years as part of the Beijing+20 review and campaign and is a bridge to the forthcoming 2015 Global Civil Society Dialogue, which will take place in November at UN Women Headquarters in New York, and to the 60th session of the Commission on the Status of Women (CSW60) in March 2016.

"We want to strengthen women's movement &put it at centre of agenda"- @phumzileunwomen to civil society leaders #UNGA pic.twitter.com/VVXvwLDp4P