India visit starts with a meeting with community members on safety

Delhi — On Saturday at a packed gathering in south Delhi, UN Women Executive Director Phumzile Mlambo-Ngcuka started her first day in India with a meeting with community members. At an interactive discussion hosted by UN Women’s NGO partner Jagori, she heard first hand from women and girls and boys on interventions that are working at the grassroots level in India’s capital city to ensure women’s safety in public spaces, which advance mobility and protection from sexual harassment. 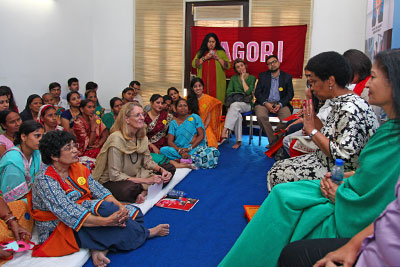 On the first day of her visit to India, Executive Director Phumzile Mlambo-Ngcuka participates in an interactive discussion with women, girls and boys about the Delhi Safe City Programme hosted by UN Women’s NGO partner Jagori. (Photo: UN Women/Gaganjit Singh.)

Women’s safety in public spaces is a grave concern in India, which came to the forefront with the gang rape and murder of a 23-year-old young woman in Delhi in December 2012 and her subsequent death. The case drew global attention and generated a strong public outcry across the country. Research by UN Women in 2012 found that 9 out of 10 women in New Delhi have experienced some form of sexual violence in their lifetime, while 6 in 10 have faced sexual violence in the last six months.

Women and girls performed a short skit at the event drawing on the daily challenges they face on the streets, and how they are addressing them. The meeting with the Executive Director was attended by community-based organizations (CBOs), government representatives and local police authorities, who collaborate on the Delhi Safe City Programme. UN Women’s senior leaders, including Deputy Executive Director Lakshmi Puri and UN Women top official in India Rebecca Tavares, were present at the gathering.

Listening to the efforts of the community who are conducting extensive safety audits, spreading awareness and advocating with authorities for better lighting and pavements, the UN Women Executive Director commended the collective mobilization generated by the local population which is producing tangible results. “For UN Women it is important to bring best practices from the community to the global level,” she said. “The lived experiences of every woman, of the girls and the boys of this community, and the right choices you are making is a best practice. What you have done here is a global best practice.”

The Delhi Safe City Programme is a key initiative of UN Women’s Global Safe Cities Programme, operating in five intervention sites and creating change agents through awareness-raising and capacity building. Engaging men and boys has been an integral component, with a core group of youth from diverse backgrounds leading localized campaigns, interrupting harassment when it’s witnessed, as well as focusing on longer-term prevention efforts. The Delhi Safe Cities model will soon be replicated in other Indian states, including Madhya Pradesh and Maharashtra.

Looking towards the 20th commemoration of the landmark Beijing Platform for Action, the UN Women Executive Director called on the participants to continue their efforts and build a future that provides the best possible circumstances for every woman and girl, for their safety as well as in all spheres of life. “This is the change that you can touch and feel,” she said. “You are making a difference that will impact the future. This is difficult work, but it is making a difference.”

Related News
UN Women supported survey in Delhi shows 95 per cent of women and girls feel unsafe in public spaces
Speech by Michelle Bachelet at Special Session for Executive Board members on Building Safe Cities for Women and Girls
UN Women Executive Director to make first official trip to India
No city can be smart and sustainable if half of its population is not safe and lives in fear of violence. – Lakshmi Puri
After gang-rape sentencing in India, UN Women urges a comprehensive approach to end violence against women
END_OF_DOCUMENT_TOKEN_TO_BE_REPLACED