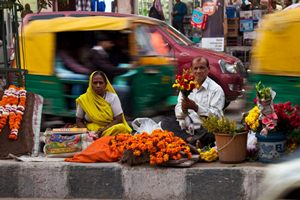 “I have started carrying pepper spray to protect myself. My parents have become more protective, they want to know where I’m going, when I’ll be back and with whom I’m hanging out,” says Srishti, a 20-year-old Delhi student who feels unsafe when she steps out of her house.

“I have started carrying pepper spray to protect myself. My parents have become more protective, they want to know where I’m going, when I’ll be back and with whom I’m hanging out,” says Srishti, a 20-year-old Delhi student who feels unsafe when she steps out of her house.

Her fears reflect the broader and growing societal concern about escalating violence against women and girls in India’s capital city, New Delhi. These have been heightened by the horrific gang rape of a 23-year-old Delhi student on 16 December, which resulted in her death.

But even before the headlines about that incident caught national and global attention, a sense of insecurity has been mounting in Delhi. A just released household survey conducted by UN Women and the International Center for Research on Women from October to November 2012 reveals that at that time, only 5 per cent of women and girls ranked public spaces in Delhi as ‘safe’ from sexual violence.

The data was collected as part of the baseline survey of the Safer Cities Free of Violence against Women and Girls Initiative by UN Women in partnership with the Government of Delhi and the NGO JAGORI. The programme in New Delhi is one of the initial pilots in five cities: Cairo (Egypt), Kigali (Rwanda), New Delhi (India), Port Moresby (Papua New Guinea) and Quito (Ecuador). It is part of the larger Global Safe Cities Initiative which aims to empower women and their communities in diverse settings.

The household survey in India was conducted among a representative sample of 2001 women and girls and 1003 men and boys in the age group of 16-49 years of age in Delhi. The data was collected from all over New Delhi: Malviya Nagar, Badarpur, Molarband, Zakir Nagar, Hari Nagar, Shahpurjat and Mayur Vihar Phase-I.

Providing a stark picture of the daily realities faced by women and girls, 51 per cent of men reported that they had themselves perpetrated sexual harassment or violence against women and girls in public spaces in Delhi. In the study, 25 per cent said they had done so in the last six months.

In cases of sexual violence, many men blamed women for their behaviour. In the study, three out of four agreed with the statement ‘Women provoke men by the way they dress’ and two men out of five fully or partially agreed with that ‘Women moving around at night deserve to be sexually harassed’.

Nearly 73 per cent of women said they do not feel safe in their own surroundings as well, and reported feeling unsafe all the time.

“Change of mind-sets is a long drawn process and requires great efforts, perseverance and patience. Common perceptions relating to controlling the mobility of women may not actually have any positive effect. Involving young men in this programme is essential to make it effective,” says Mr Rajiv Kale, Director, Department of Women and Child Development, Government of Delhi. The Government of Delhi is a key partner in the Safe Cities initiative in New Delhi along with UN Women and civil society partner, Jagori.

Women’s safety audits are being conducted as part of the programme by UN Women partner JAGORI in selected areas to review infrastructure and the elements of public spaces that lead to safety or vulnerability. Poor lighting near bus stops and subways, lack of public toilets for women and generalized fear have been the main concerns raised by women during these audits. The survey, along with safety audits and the Safe Cities Strategic Framework will guide work to make Delhi safer for women.

“Sexual harassment and violence in public spaces must not be tolerated. We need to join hands and work together to change existing attitudes and behaviours. This is everyone’s responsibility – men, women, families as well as service providers” said Anne F. Stenhammer, UN Women’s Regional Representative for India, Bhutan, Maldives and Sri Lanka.