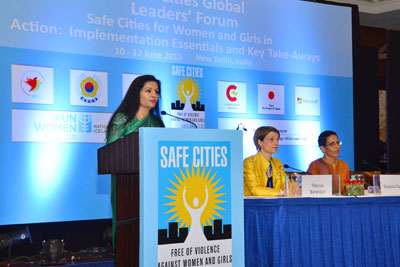 “In the early nineties the percentage of people living in urban areas was 42.9 per cent, in 2015 it is 54 per cent, and in 2030, it is expected to be 60 per cent. […] How does all this affect women?” asked UN Women Deputy Executive Director Lakshmi Puri. “No city can be smart and sustainable if half of its population is not safe and lives in fear of violence.”

Calling on governments, citizens, the private sector and media to come together and make safe urban spaces for women a reality, Ms. Puri delivered her remarks at the opening on 10 June of a Safe Cities Global Stakeholders’ Planning Meeting being held in New Delhi, India until 12 June. Titled “Safe Cities for Women and Girls – Implementation Essentials”, the consultation involves 120 participants from around the world, including from cities where UN Women’s Safe Cities Global initiative is currently underway.

India’s capital, New Delhi, was one of the pioneering cities to take part in the global programme. The Indian Government is expected to launch its own 100 Smart Cities initiative, to improve the quality of urban life, in the coming weeks. 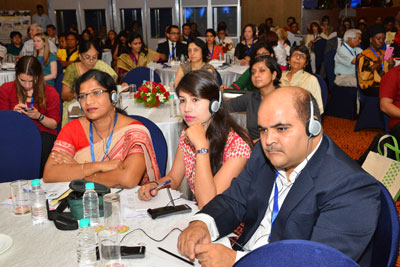 Designed as a learning and exchange platform, the stakeholders’ meeting has been convened to share and discuss evidence-based approaches, practices, tools, and lessons learned to advance the international knowledge base on how to make cities safe for women and girls. Panels are focusing on  the Safe Cities teams’ work in action, as well as community mobilization and collaboration with women’s organizations at the grass-roots level.

UN Women’s Safe Cities Global Initiative launched its first programme in 2010 and has been progressively expanding the initiative around the world, facilitating global commitment to make cities smarter, safer and more sustainable through partnership and collaboration – between residents, government, the private sector and civil society. In New Delhi, the programme has entered its third phase under a renewed Memorandum of Understanding with the Government of New Delhi. Other flagship cities include Quito (Ecuador), Cairo (Egypt), Port Moresby (Papua New Guinea) and Kigali (Rwanda), but the global initiative has grown to include initiatives in more than 20 cities around the world.

Bringing bus drivers on board against sexual harassment in Marrakesh

India visit starts with a meeting with community members on safety

Related News
11/06/2015
No city can be smart and sustainable if half of its population is not safe and lives in fear of violence. – Lakshmi Puri
06/12/2016
Press release: Spotlighting urgent need to end violence against women and girls, business leaders pledge commitment and investment
28/10/2016
Aishwaryaa Dhanush meets with UN Women for a dialogue on gender equality
08/11/2014
India visit starts with a meeting with community members on safety
07/11/2014
UN Women Executive Director to make first official trip to India
END_OF_DOCUMENT_TOKEN_TO_BE_REPLACED