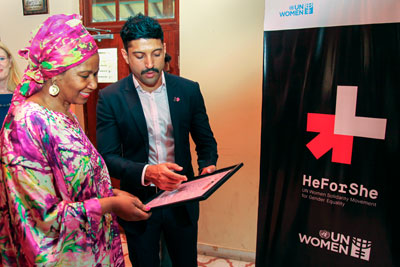 Ms. Mlambo-Ngcuka meets with newly appointed UN Women Goodwill Ambassador for South Asia, Farhan Akhtar. He is the first man to take on the role in the organization's history. Photo: UN Women/Gaganjit Singh

An accomplished and well-respected actor-filmmaker-singer, Farhan Akhtar has not only made his presence felt in the Indian film industry with his versatility, but has represented the voice of numerous concerned men on the important issue of gender equality and violence against women and girls in India through his Men Against Rape and Discrimination (MARD) campaign.

Farhan will dedicate his efforts as UN Women’s Goodwill Ambassador for South Asia towards the empowerment of women and girls, and will serve as an advocate for UN Women’s newly launched HeForShe initiative in advocating for gender equality and women’s empowerment.

“We are pleased and honoured to have Farhan as our Goodwill Ambassador for South Asia, for we believe his work and values represent the core values of UN Women,” stated UN Women Executive Director and Under-Secretary-General Phumzile Mlambo-Ngcuka. “Farhan started his own campaign, MARD — Men Against Rape and Discrimination — that aims to sensitize men and create awareness about the safety of women. That kind of engagement is essential. We need creative and committed men like Farhan to push the gender equality and women’s empowerment agenda. I am convinced that Farhan’s passion and conviction for the cause will galvanize a multiplier effect and reach the hearts and minds of men and boys in South Asia and beyond,” added Ms. Mlambo-Ngcuka.

The MARD campaign has successfully encouraged many actors to join this campaign and spread awareness. Corporations like Google have also engaged with the initiative to empower women through Internet literacy.

“I am honoured to serve UN Women as the Goodwill Ambassador for South Asia,” said Mr. Akhtar. “This gives me and our MARD initiative an added impetus to work together towards a more gender equal India and world. I am a supporter of UN Women’s HeForShe campaign and the role men and boys can play in stopping crime against women and girls, and working towards gender equality. Through this new partnership I want to call on all men and boys to be a catalyst for change and, through our actions, create a value system to end gender disparity.”

Mr. Akhtar’s appointment coincides with the visit of UN Women’s top official to India. Earlier in the week she met with the President of India and senior ministers of the new government, and participated in the 2nd Global MenEngage Symposium, which brought together more than 400 NGOs working on gender justice in New Delhi. The visit to India comes as UN Women’s global initiative Beijing+20 “Empowering Women, Empowering Humanity: Picture It” is reigniting a global conversation on gender equality and women’s rights in the lead up to the 20th anniversary of the historic 1995 Beijing Conference, which produced what is considered the most comprehensive women’s rights agenda, the Beijing Platform for Action.
UN Women’s other Goodwill Ambassadors include British actor Emma Watson, Academy Award winner Nicole Kidman and HRH Princess Bajrakitiyabha Mahidol of Thailand.

About UN Women
UN Women is the UN organization dedicated to gender equality and the empowerment of women. A global champion for women and girls, UN Women was established to accelerate progress on meeting their needs worldwide. For more information, visit www.unwomen.org

About UN Women’s HeForShe Campaign
HeForShe is a solidarity movement which calls upon men and boys to stand up against the persisting inequalities faced by women and girls globally. The campaign strengthens the support for women’s rights as human rights by enlisting the support of men and exhorting them to put themselves forward as advocates for gender equality. For more information, visit https://www.heforshe.org/