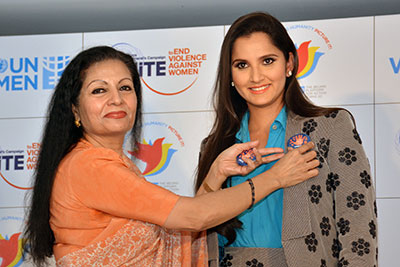 Sania is India’s most successful women’s tennis player and the first Indian to break into the World Tennis Association’s Top 50 rankings. She has won several Grand Slam Mixed Doubles Titles and other International Tournaments. For her achievements she has been awarded by the Government of India with the honours of Padma Shri and the Arjuna awards.

She has been a role model to many children, including girls, to break barriers and strive for their goals in life and career choices. She has used the spotlight on her professional success to highlight social issues that are of concern for many Indians, speaking out on issues such as the need to halt the practice of female foeticide and the decreasing sex ratio in India. She has repeatedly urged a changing of the mindset that discriminates against the girl child and expressed her strong desire to spread the message of gender equality.

“Sania Mirza has been a role model for girls in India and all over the world. We are pleased and honoured to have such a dynamic woman as our Goodwill Ambassador for South Asia,” stated Lakshmi Puri, Assistant Secretary-General of the United Nations and Deputy Executive Director of UN Women. “She has been a youth icon and a beacon of light in sports, a field that is often harder for women and girls, due to an inherently uneven playing field. Not just her achievement in sports, but Sania’s strong voice has reverberated across the region on gender issues as well. Sports can make a great contribution to gender equality. We salute Sania’s achievement of putting India on the global tennis map and inspiring thousands of children, many of them girls, to take up sports as a career,” added Ms. Puri.

“It is an honour to serve UN Women as the Goodwill Ambassador for South Asia. It inspires me to work harder towards a level playing field for women. Gender equity in sports as well as using sports to advocate for gender equality in communities is essential. Equality depends on each and all of us. From the government that changes its laws, to the company that advances equal pay and equal opportunity, to the mother and father who teach their daughter and son that all human beings should be treated equally, to the athletes who demonstrate equality and excellence,” said Sania.

Minister for Youth Affairs and Sports Mr. Sarbananda Sonowal said, “Sania has been a role model for girls and women of India, and her appointment as UN Goodwill Ambassador is a moment of pride for the country. As the custodians of the nation, the Government’s constant endeavour will be provide the right opportunities and environment so that other girls can emulate Sania’s success and bring glory to the country.”

Welcoming the appointment of Sania Mirza as UN Women Goodwill Ambassador, Lise Grande, United Nations Resident Coordinator in India said, “As one of India’s most successful women athletes, Sania Mirza is an inspiration to millions of young women across South Asia. Sania is an outstanding example of the excellence that women can achieve when they level the playing field.

Sania’s appointment coincides with the International Day for the Elimination of Violence against Women. Globally, one in three women and girls will experience physical or sexual violence at some point in her life. More often than not, violence against women is committed by an intimate partner. To raise awareness on the issue, the UN commemorates 25 November every year as the International Day to End Violence against Women. UN Women, the UN organization mandated to advance women’s empowerment and gender equality, is leading the global mobilization of partners from all walks of life, including governments and civil society.

Symbolizing a brighter future without violence, orange has been designated as the colour for the initiative.

This day also marks the start of the 16 Days of Activism Against Gender-Based Violence – an international campaign which takes place each year, and runs from 25 November, (International Day for the Elimination of Violence against Women), to 10 December (Human Rights Day). It is used as an organizing strategy by individuals and groups around the world to call for the elimination of violence against women and girls. This year the UNiTE campaign has put out a call to “Orange YOUR Neighborhood” which kicks off on 25 November, with people around the world displaying the colour to demonstrate support and symbolize hope for a future free from violence against women and girls.