A new law against domestic violence adopted in August in The former Yugoslav Republic of Macedonia, coupled with efforts to promote the Istanbul Convention are giving new hope to survivors.

Suzana1 used to think domestic violence was “something that all women go through but are ashamed to speak about.” For 15 years, the 36-year-old woman from Skopje, the capital of The former Yugoslav Republic of Macedonia2, suffered constant psychological and emotional abuse from her husband, the father of her two young children. It eventually evolved into severe physical violence.

“I only realized later that it was psychological and physical violence, which manifested itself in belittling me, humiliating me, using force, threatening me and later using the children as a way of keeping me under control,” says Suzana.

She reported her case to the Centre for Social Work and the police — the two institutions responsible for responding to complaints of domestic violence — and the couple divorced. But her ex-husband began stalking her, intercepting and humiliating her in front of others. Verbally abusive over the telephone and in public, he even tried to discredit her at her workplace and jeopardize her job.

“[The police] said that as long as he didn’t have any physical contact with me it was not a serious problem,” she says. The country had no systemic law on domestic violence and stalking was not regulated at that time. 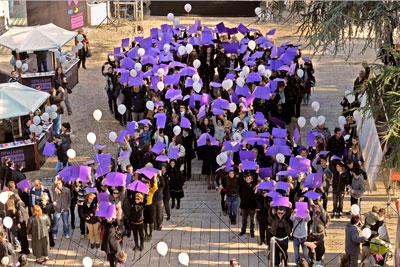 But with growing advocacy from women’s groups, and support from UN Women and the United Nations Development Programme (UNDP), in August 2014 the Parliament of The FYR Macedonia adopted a new path-breaking law to combat domestic violence, protect survivors and strengthen the prosecution of perpetrators. It expands the definition of violence to include economic violence and stalking, and introduces risk assessments and urgent proceedings, such as to remove perpetrators from households.

The law establishes a national coordination body and introduces training on gender equality in the formal education system and for service providers. In preparation for the law, in July UN Women began training civil society service providers to act as trainers in their respective organizations.

The new law also fulfils commitments made when the Government of FYR Macedonia signed on to UN Women’s COMMIT initiative in 2013.

To strengthen relevant institutions and the judicial system, for two years, starting in 2012, the FYR Macedonian Ministry of Labour and Social Policy and the Academy for Judges and Public Prosecutors partnered with UN Women and UNDP on a project funded by the Government of the Netherlands. They developed standards for comprehensive support services and conducted an assessment of court proceedings in domestic violence cases from a gender perspective, which helped target specialized training courses for judges and public prosecutors.

Suzana was eventually able to press abuse charges and get a restraining order against her ex-husband. Her ordeal was shared with judges and public prosecutors, the Ministry of Labour and Social Policy, civil society and Members of Parliament in a video message shown at various debates and consultations. It contributed immensely to stalking being regulated under the new law.

“We will continue working closely with the Government so that proper by-laws are developed to ensure effective implementation of the laws on domestic violence and improved protection for survivors,” says UN Women Gender Specialist Dominika Stojanoska.

Next steps: the Istanbul Convention

UN Women has also been supporting advocacy efforts by civil society for the country’s ratification of the Council of Europe Convention on preventing and combating violence against women and girls and domestic violence (also known as the “Istanbul Convention”). The FYR Macedonia has signed the Convention but won’t be legally bound by its provisions until it has ratified. 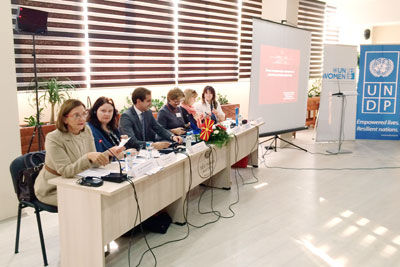 Such efforts recently received a boost at a two-day regional workshop in Skopje organized in late September by UN Women and UNDP. The workshop on “Improving the protection of survivors and the prosecution of perpetrators of gender-based violence and domestic violence” gathered numerous representatives from the Council of Europe, Governments, parliaments, judiciary and public prosecution offices, academic institutions and civil society organizations, together with many of their counterparts from across South-Eastern Europe.

The regional workshop aimed to increase awareness and discuss best practices for countries that have ratified the Convention, as well as associated benefits and challenges. Participants recommended establishing a regional group of experts to monitor amendments in civil and criminal legislation and work on bringing the Istanbul Convention closer to home.

The FYR Macedonian Minister of Labour and Social Policy, Dime Spasov, told workshop participants that ending violence against women should be a top priority for national and international institutions and that “everyone at all levels, should get involved and speak out against domestic violence.”

1 Her name has been changed to protect her identity.

2 The FYR Macedonia in all subsequent references.