Women are cultivating mushrooms and tomatoes, learning about business and agriculture and pooling their funds along with combating social stigma and confronting gender-based violence.

“I was diagnosed with HIV in 2008. I became infected while in the camp,” says Angelique, a mother of five living in the Gihembe refugee camp in the Northern Province of Rwanda. Angelique is from the Masisi region in the Democratic Republic of the Congo and has been living in the camp since 1997. The Gihembe camp is home to about 20,000 Congolese refugees.

The lush green Rwandan countryside looms in stark contrast to the uniform mud-walled architecture of the Gihembe refugee camp. Life in the camp moves with its own rhythm: soft singing floats over the hills, emerging from a church at the camp’s centre; children’s laughter is ubiquitous as they play; people line up for water and women can be seen washing clothes and cooking. There is a small open market between the houses, where coal, tomatoes and onions are for sale.

But refugees remain a vulnerable group, caught between the difficulty of going home and alternatively fully integrating into their host country. Some refugees in the Gihembe camp have been living there since the camp opened in 1997—others have been repatriated back to the DRC, only to return due to the country’s instability. Opportunities for skills development and livelihood creation are limited as the entire camp population depends on humanitarian assistance. 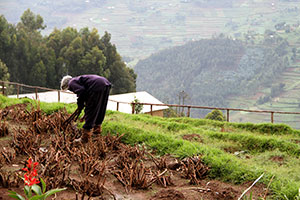 In Rwanda, women and girls represent nearly 60 per cent of adults living with HIV. Young women aged 18-19 are ten times more likely to be infected with HIV than young men of the same age.

In the HIV/AIDS project coordination office at the camp, Angelique sits in an elegant blue kitenge dress, a typical colourful African fabric. She is one of the beneficiaries of the REWARD (Refugee Women in Agriculture for Rural Development) project, supported by One UN Rwanda (UN Women, UNAIDS, UNHCR, and WFP) which aims to economically empower women refugees living with HIV/AIDS.

Angelique is one of 50 women living with HIV who are cultivating mushrooms and tomatoes. The REWARD project also provides supplementary food for the women, who have special nutritional needs because of their HIV status.

Each woman devotes one full day a week to the project. Through the self-scheduled group timetable, women are able to ensure that they can also tend to their domestic responsibilities. The women meet regularly to discuss women’s issues, including health and finance, as well as project coordination. The group pools their resources and shares their savings, using consensus decision-making. One of the women is the designated treasurer, who determines the amount of mushrooms to be sold, and the portion to be consumed by members.

“The cooperative is growing mushrooms for the first time and obtaining good harvests,” says Angelique. “I will use the money on food for my children, education and health, and other necessities.”In addition to fuelling their economic empowerment, the project also helps to build a sense of community and support for the women. Their material and social vulnerability is greatly reduced as a result.

According to Peripeti Musabyimana, Gihembe’s HIV programme coordinator, 1.4 per cent of the total camp population is HIV-positive. Stigma remains one of the biggest challenges refugees living with HIV face. Stigma manifests itself in camp gossip, resulting in exclusion from social activities, and also violence.“Children will sometimes drop out of school because they are bullied and teased about being HIV-positive,” says Ms. Musabyimana.She says women living with HIV in Gihembe experience double discrimination as a result of their disease, and due to traditional gender roles and discrimination stemming from the male-dominated nature of the camp. The result is social stigmatization and gender-based violence, but there are efforts to address both these issues.

In the Gihembe camp, an association called Tubeho (“Let’s live” in Kinyarwanda) helps to fight stigma and offer support to women living with HIV/AIDS, to improve their economic security and prevent gender-based violence -- a serious problem, despite camp efforts to prevent and respond to it.Through their newfound economic independence the women’s group has increased their confidence and status, and the sight of entrepreneurial women living with HIV is an important way to combat stigma.

Ntuzamukunda is the project’s elected leader. Her tasks include managing the cooperative and organizing group meetings. When asked about the challenges, she says, “Women find it difficult to balance responsibilities. Women work hard at home and on their project.”The women have already identified the most profitable crops and harvested 300 kg of mushrooms in their first phase. One kilogram of mushrooms equals about RWF 1000 (USD 1.47) when sold. The women receive business and agricultural training throughout all phases of the project and they have opened a bank account to pool their savings and expand to other business activities.

Angelique speaks hopefully about being able to return to her homeland one day. She plans to grow mushrooms there when she returns.

With funding from the One UN Fund, UN Women and its partners UNHCR, UNAIDS, WFP provide financial and technical support to the REWARD project.

Related News
06/11/2013
Property and inheritance rights key to empowering women living with HIV, say grass-roots groups
01/10/2013
Phase II Grantees & Project Descriptions
04/03/2019
From where I stand: “I never gave up and I am learning everyday”
17/10/2017
In Cameroon, former hostages of Boko Haram find safety and build resilience
23/08/2016
From where I stand: Haidara Djeneba Sy
END_OF_DOCUMENT_TOKEN_TO_BE_REPLACED