Mexico City — At the first High-Level Meeting of the Global Partnership for Effective Development Cooperation, held in Mexico City 15-16 April 2014, governments, business, private foundations and civil society assessed progress over the past two years towards implementation of the 2011 Busan Partnership Agreement, which re-affirmed global commitment to the principles of accountability, results, transparency, inclusivity and national ownership in development cooperation. 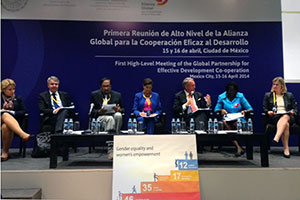 Hosted by the Government of Mexico, more than 1500 participants took part, including representatives of the Governments of 130 countries, parliamentarians, business leaders and civil society. The meeting reaffirmed the Busan principles but called for: more and better aid to support domestic resource mobilization especially through strengthening tax systems; retaining aid to middle income countries where the largest numbers of poor people live; and accountability mechanisms for the private sector.

A communiqué was adopted by all delegates calling for renewed action in all these areas and a firm anchoring of the Global Partnership in the new post-2015 development framework. The communiqué calls on countries to “track and make public resource allocations to gender equality and women’s empowerment.”

The Mexico meeting also launched 38 new initiatives to drive more effective development co-operation. These included a voluntary initiative submitted by UN Women with the Organization for Economic Cooperation and Development (OECD) and the Feminist Group of the CSO Partnership for Effective Development (CPDE) to support countries to strengthen systems to track and make public allocations for gender equality and women’s empowerment; encourage donors to increase their support to strengthen and monitor responsible institutions; deepen inclusive and democratic multi-stakeholder dialogue on gender equality and women’s rights; and increase the number of countries monitoring and reporting allocations for gender equality and women’s empowerment.

“There is currently a huge gap between rhetoric and reality in terms of securing adequate financing for gender equality, women’s empowerment and the human rights of women and girls,” said UN Women Deputy Executive Director John Hendra during a focus session on gender equality, organized by UN Women, in collaboration with the OECD-DAC Network on Gender Equality and the Feminist Group of the CPDE. “The figures don’t lie: there is chronic underinvestment in gender equality and women’s empowerment – in other words an accountability deficit – and much greater political will and much more concerted action is needed now to change this.”

There was strong agreement among participants that investing in gender equality and women's empowerment is essential for progress towards sustainable development. “That’s why the commitment made at Busan to track and transparently report on financing for gender equality is so important and why it needs to be rolled out to many more countries so as to help stimulate greater political will,” reaffirmed Mr. Hendra. “We need to do whatever we can to turn policy and financing commitments into action and results for women on the ground.”

Prior to the High-Level Meeting, the Inter Parliamentary Union met in the Mexican Senate to discuss the role of parliamentarians in the Global Partnership. UN Women presented on the gender indicator in the global monitoring framework for the Busan Agreement. As highlighted in the 2014 report on the global monitoring framework, of the 46 countries that reported voluntarily, 35 countries reported on the gender equality indicator. 17 countries have systems for tracking allocations on gender equality, and of these, 12 make public their allocations on gender equality.

The parliamentarians’ statement called for the “acceleration of implementation of the commitment towards gender disaggregated budgeting and monitoring systems; as well as stronger commitment to support the political empowerment of women as a proven way to improve development outcomes.”