Stories of survivors portrayed by journalists in Georgia

Actors and playwrights use interactive verbatim theatre to perform real-life stories produced by journalists trained at a UN Women workshop on gender-sensitive reporting.

They still find it difficult to raise their voice when facing violence. They are always toasted at the table, but beaten, threatened, controlled, married off forcefully, and denied education or the right to work. In Georgia, this happens often yet stays behind closed doors. 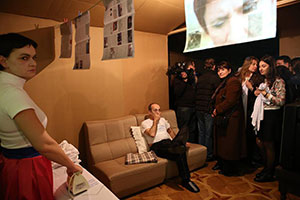 "The room of violence" is one of the scenes in the "Interior of Violence" interactive theatre exhibit by the Marjanishvili State Drama theatre in Georgia. Photo: UN Women/Maka Gogaladze

To open those doors, on 8 March 2014, the UN Joint Programme to Enhance Gender Equality in Georgia (UNJP) marked International Women’s Day by launching “The Interior of Violence" – an interactive exhibit and performance with elements of verbatim theatre  staged by actresses and actors of Georgia’s Kote Marjanishvili State Drama Theatre.

“I have been writing about these issues for many years and even attended several trainings. This makes you feel like you know everything, nevertheless, I must admit that the three-day workshop conducted by UN Women was an eye-opening experience,” says Eka Kevanishvili, a journalist at Radio Liberty.

She was among the 21 Georgian journalists who attended the training on ‘Gender-Sensitive Reporting and Covering Violence against Women in the Media’, held in Tbilisi, Georgia from 25-27 January, 2014. “The training reminded me of the things that I, as a journalist, should never do and the things I should never write. I feel an even stronger desire to continue featuring these issues,” she said.

The three-day training focused on covering domestic violence issues in a balanced, non-discriminatory way. It stressed the importance of gender-sensitive reporting and how to achieve it, types of domestic and gender-based violence and ways to prevent it, how to interview survivors and protect their identities, as well as using appropriate language, terminology and information sources, as well as other legal and ethical issues. 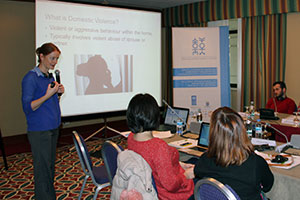 “The training included very interesting theoretical background and practical exercises,” explained Sopo Aptsiauri, a photographer at “Liberali” magazine. “It was aimed at helping us cover the violence issues in an ethical and professional way. It included analysis of the mistakes based on real-life examples and ways to correct these mistakes.”

According to the study of gender stereotypes in Georgian media conducted by the Media Development Foundation in 2011, the majority of journalists lack awareness of gender issues and stereotypical thinking and attitudes dominate and coverage of women’s issues often reinforces gender stereotypes.

According to Irina Japharidze, Manager of UN Women’s component of the UN Joint Programme on gender equality, media has a key role in raising public awareness on violence against women and domestic violence. “However, it is even more essential to convey the information in a right way. This is why we started to work with journalists to improve their knowledge on issues related to gender-based violence and domestic violence,” she explained.

As a follow-up to the training, the journalists and photographers teamed up in twos to develop special reports illustrated with photographs and other graphic material covering issues related to violence against women and domestic violence to be presented to their colleagues and the public at large during the exhibit.  “In order to sensitize the audience even more towards the problem of violence against women, the viewers of the exhibition were allowed to engage in the performance by making statements or participating otherwise, in order to become part of the presented stories and thus better understand how violence affects women in their everyday lives,” says Nino Maglakelidze, director and producer of the performance.

The stories described different situations of women survivors of domestic violence, underlining how society tends to keep silent and tolerate all kinds of women’s rights’ abuses. They also captured stories of survival and support from families, friends and relevant institutions.

“The things I saw here, things I have read and the performance I have attended, all of this is happening around us and unfortunately, society often fails to adequately react to it,” says blogger Teiko Anjapharidze. “This is why we should condemn violence against women and violence in general as journalists, ordinary citizens, perhaps everyone, we all can do something about it.”

Watch a video on the exhibit [with English subtitles] here: http://youtu.be/605faISjsqk

The UN Joint Programme to Enhance Gender Equality in Georgia (UNJP) is funded by the Swedish Government and implemented by UN Women, UNDP and UNFPA.