Our expert's take: Why do women remain invisible, in spite of their presence? 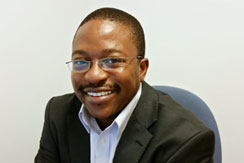 Venge Nyirongo joined UN Women's Economic Empowerment Section in March 2014, to support the organization's strategic and policy focus on Sustainable Development. He builds on his work in gender equality and, particularly, the advancement of women's economic empowerment, from prior experiences in UNEP and UNDP. He is an economist with a research interests in economic modeling of access to products and services in developing countries.

The Hunger Games, the famous multimedia franchise, is not far from the truth. It’s no myth that being food-secure is essential for human dignity and to ensure livelihoods and wellbeing. Yet about 842 million people today live in chronic hunger across the world. Although on the decline, the numbers of the undernourished also continue to remain exorbitantly high. Of these, women and girls remain most affected.

The failure to ensure women’s access to nutritious food has an impact on nutrition for children under five years of age, leading to the loss of lives and cognitive or developmental limitations for those who survive. In many cases, the food-insecure and hungry continue to suffer in silence without a voice to appeal for more equality and fairness in the distribution of resources that would alleviate their plight.

Without a doubt, women are key to food security. Globally, women comprise about 43 per cent of the agricultural labour force. Their dedication to both food and cash crops is high, although the returns realized from the market favour men more than women. The African Development Bank estimates that 90 per cent of Africa’s food is produced by women in spite of the fact that few women hold titles to the land they work. Because of this, rural women’s contribution to Africa’s agriculture is important for the persistence and success of their families, communities and local and national economies, and to poverty reduction and sustainable development.

In spite of the catalytic role they play, women remain largely invisible. Rural women face restricted access to productive resources such as land, agricultural inputs, finance and credit, extension services and technology, which in turn limits their agricultural output. They face more difficulties than men in gaining access to public services, social protection, employment opportunities and local and national markets and institutions due to cultural norms, institutional and social discrimination and security issues that restrict and circumscribe their access. For instance, fewer agricultural extension services are provided to female farmers than their male counterparts; in rural sub-Saharan Africa, women hold less than 10 per cent of the credit available to smallholder agriculture. 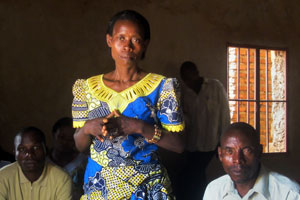 Dancilla Mukamana became a member of the Ibyiza Birimbere farmer cooperative in Rwanda at the insistence of other women farmers, and a loan from the cooperative resulted in increased productivity on her farm. Today, she has made home improvements such as a metal door and roof, and has become a decision-maker in her household. Photo: UN Women/Ana Lukatela

Although rural women’s access to microcredit has progressed in recent years, microcredit volumes per person may help to reduce individual poverty, but it can hardly support the transformative changes required for women’s collective positioning as agricultural producers and rural entrepreneurs. Without land titles as collateral, women experience greater difficulty obtaining loans, and this further compromises women’s ability to add value to the agricultural chain, diversify and upscale their production.

Women’s participation in productive non-food activities, agricultural and otherwise, is also important in addressing one of the critical dimensions of food security: access to food. Women often lack access to the basics of farming as they face restrictions on their ability to buy or inherit land, save money through and borrow from a financial institution, or even sell their produce at a market. More rural women than their counterparts in urban areas lack access to markets. Poor transportation, among other challenges, often confines them to local markets in which they frequently cannot negotiate better prices for their goods. Also, gender differences in crop choice persist, with lucrative cash crops being largely “male crops” while crops for home consumption are seen as “female crops.”

Related News
18/11/2022
How male champions are helping to end gender-based violence in Uganda
14/11/2022
Speech: Focus on gender equality as central to climate action with concrete solutions
24/05/2022
Speech: Women’s land rights are intrinsically and vitally linked to gender equality
12/09/2019
From Tanzania to Algeria, rural women are taking charge of their lives and livelihoods
10/09/2019
In the Bolivian Amazon, women are protecting the forest and empowering themselves
END_OF_DOCUMENT_TOKEN_TO_BE_REPLACED