Pretoria - The intelligent application of technology can be the game changer for achieving gender equality.  That is why UN Women Executive Director Phumzile Mlambo-Ngcuka has put a strong focus on ensuring the development of the next generation of women leaders in science, technology, engineering and mathematics (STEM) fields.

On the way to the 24th Session of the African Union Heads of States’ Summit held in Addis Ababa, Ethiopia, the Executive Director took the opportunity to spend time with delegates of TechWomen, who visited South Africa.

An initiative of the U.S. Department of State's Bureau of Educational and Cultural Affairs, TechWomen uses mentorship and exchange to empower participants to reach their full potential. It connects and supports the next generation of women leaders in STEM from Africa, Central Asia, and the Middle East by providing them with the access and opportunity needed to advance their careers, pursue their dreams, and inspire women and girls in their communities.

The TechWomen delegation of over 50 women visited South Africa to expand their professional networks and to bolster relationships between U.S.-based mentors and emerging leaders from across Africa and the Middle East. Ms. Mlambo-Ngcuka was a special guest of the delegation.

UN Women’s South Africa Multi-Country Office, based in Pretoria, hosted a breakfast event for the delegation on 27 January. Attended by around 200 cross-sectorial representatives, the event gave TechWomen delegates the opportunity to meet local counterparts and learn about initiatives underway in South Africa to build the STEM capacity of young women. Speakers included representatives of the South African Government, a TechWomen mentor from the U.S., as well as the UN Women Executive Director. 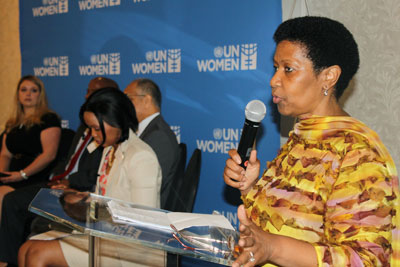 “Technology influences the enjoyment of almost any right, almost every aspect of society, all corners of the development agenda, and all dimensions of women’s empowerment and gender equality. It is a source of solutions and opportunities,” said Ms. Mlambo-Ngcuka, at the event.

In the audience were some of the current participants in South Africa’s Techno Girl programme, in which high-achieving 15- to 18-year-old school girls from disadvantaged communities are placed in corporate mentorship and skills-development programmes. The initiative is designed to help girls make informed career choices, with an emphasis on STEM fields.

Reflecting on the event and her interaction with the TechWomen delegation, Ms. Mlambo-Ngcuka reinforced the importance of harnessing the power of technology to end gender equality and congratulated TechWomen on the contribution they are making towards achieving this goal.

To learn more about the UN’s work on women in STEM, see our Beijing+20 In Focus package on Women in Education and Training.