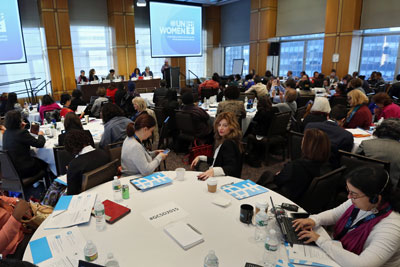 Almost 150 women’s rights advocates, members of UN Women’s Civil Society Advisory Groups from around the world gathered in New York City on 23–24 November for a two-day conference to discuss strategies for reaching a Planet 50-50 by 2030. The Global Civil Society Dialogue united women of diverse backgrounds to share their ideas on the regional and global implementation of the Sustainable Development Goals (SDGs) in partnership with UN Women.

As the Millennium Development Goals (MDGs) laid out in 2000 reach their end date, the SDGs will build on their legacy, explained UN Women Executive Director Phumzile Mlambo-Ngcuka. 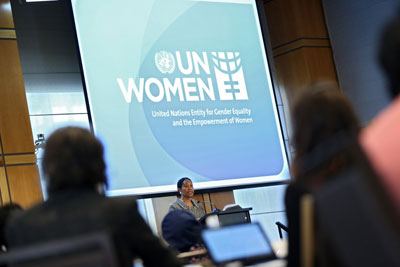 “I hope we can use this [meeting] as an opportunity for us to plan for a series of high-impact collaborative actions leading us to 2030,” she said in her opening remarks. “This time is for us to plan, as it is said in Agenda 2030, for shared prosperity, for people, for the planet, and for partnerships. This meeting must leverage UN Women’s convening power, set out universal milestones on a roadmap for results by 2020 and 2025, and work for major achievement by 2030.”

Ms. Mlambo-Ngcuka stressed the importance of developing a strong relationship with youth to create a multigenerational movement to empower women and combat all forms of gender-based discrimination with “substantive and irreversible” change. She encouraged participants to collaborate and develop strategies to hold governments accountable on the key gender equality commitments of Agenda 2030. 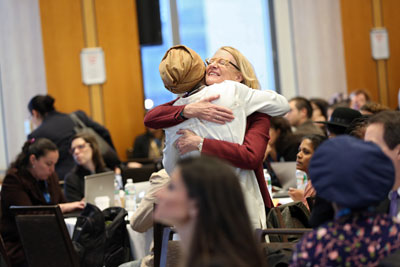 Suggestions that arose from the regional and themed panels included establishing a system to track and rank governments’ progress, providing civil society advisors to work with each government, increasing efforts to include men in the gender equality discourse, and strategizing to optimize the limited resources available.

“We need to strengthen national statistical offices, because that’s what we do not have: Enough data,” said Esther Mwaura-Muiru, the rapporteur for Africa. “Data that is disaggregated and analyzed properly can get us where we want to go.” She also suggested that existing gender equality frameworks at national and regional levels are often underutilized, but have the potential to hold stakeholders accountable. 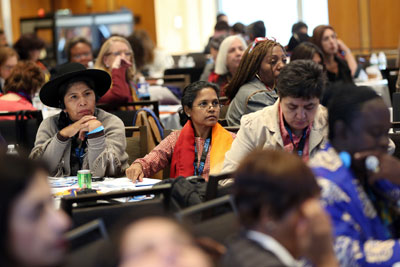 Civil society members from Asia and the Pacific noted that an assessment of accomplishments and shortfalls would be valuable, moving forward: “Before we get into a new strategy, we really need to do a critical review of what has worked and what has not worked,” said Nandita Shah, adding that implementation strategies for SDGs could be adapted to suit different regions and contexts.

“The SDGs, the Beijing Platform for Action, and the Security Council resolutions and so much more have the ability to stop the world from hurting—if implemented,” said Lopa Banerjee, Chief of UN Women’s Civil Society section, at the plenary session. “This is why were are here for these two days, in this Global Civil Society Dialogue at this moment in time: To find ways to work together in this madness to stop the pain and reclaim hope.”

Related News
27/04/2016
“Civil society is called upon to capitalize on the aspirations set out in the 2030 Agenda” — Lakshmi Puri
23/11/2015
“Now is the time for talking about concrete measures, not generalities” — Executive Director
27/09/2015
Civil society monitors global commitments
25/09/2015
UN Women welcomes agreement on post-2015 development agenda
24/09/2015
Civil society organizations and UN Women strategize on joint work to achieve the SDGs
END_OF_DOCUMENT_TOKEN_TO_BE_REPLACED