I thank CIVICUS, World Alliance for Citizen Participation and the Colombian Confederation of NGOs for inviting UN Women to be a privileged observer of this International Civil Society Week 2016.

Thanks to our moderator and distinguished speakers participating in the meeting today who have challenged us to help the Gender Working Group to define its strategy to ensure accountability to the SDGs on Gender Equality and Women’s empowerment.

This reflection is timely given the historic confluence of normative commitments achieved in 2015. 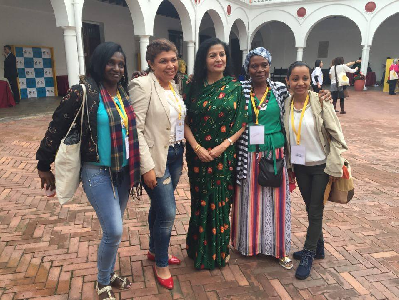 From CSW 59’s Political Declaration; the Addis Ababa Action Agenda on financing for development; the 2030 Agenda for Sustainable Development; the 15th anniversary and global study of Women and Peace and Security; and the climate accord of COP21, 2015 was an unprecedented and historic year for the consolidation of game changing commitments to gender equality and women’s empowerment.

On the way forward, the engendering of the upcoming major intergovernmental, commitment making processes and their outcomes in respect of humanitarian action and resilience building in the World Humanitarian Summit and beyond, the UN General Assembly Summit on Large Movements of Migrants and Refugees and the New Urban Agenda in HABITAT III, need to be taken into account.

The 2030 Agenda represents a paradigm shift in the development discourse that addresses the social, economic and environmental dimensions of sustainable development in an integrated way, fostering gender equality, peace and prosperity for all.

It is an indivisible testament of inclusivity, vowing to leave no one behind, and stressing the significance of all women and girls as beneficiaries and contributors to achieving all the goals and the final outcome of Planet 50-50 by 2030, latest. In this regard, gender equality is the component of the 2030 Agenda that is truly universally applicable and where every country needs to step it up and make this aspiration the reality of our time.

As you know, this commitment encompasses SDG 5, but also all the gender-sensitive targets within 11 other SDGs in a unity that I call ‘the gender equality and women’s empowerment compact of the 2030 Agenda.

This is the first time that so much emphasis has been placed on acceleration and creating change in a generation. As never before, there is strong consciousness that continuing at a slow pace of change would be a major constraint to achieving the objectives and goals of the 2030 Agenda. Therefore the emphasis on acceleration is a clear signal that the 2030 Agenda is not business as usual.

Many of you were in March in New York City attending CSW 60 and can testify that this year’s annual session was the largest, most critical intergovernmental forum with diverse women's voices influencing the road to 2030. The priority theme of “Women’s Empowerment and the Link to Sustainable Development,” which helped to frame, spell out and contextualize gender equality issues in conjunction with the 2030 Agenda, had special cross-sectoral resonance.

Furthermore, by recognizing that the 2030 Agenda is of unprecedented scope and significance, accepted by all countries and applicable to all and will be implemented by all counties, the Agreed Conclusions called on Member States to "implement all goals and targets of the 2030 Agenda in a comprehensive manner, reflecting its universal, integrated and indivisible nature" including by developing cohesive sustainable development strategies to achieve gender equality and women's empowerment and the integration of gender perspectives across all government policies and programmes at all levels.

What does a full, accelerated and effective implementation of the 2030 Agenda mean? How can we expand the normative gains into sectoral outcomes?

CSW 59’s Political Declaration recognized the "important role of UN Women" in supporting Member States in their the full, effective and accelerated implementation of the Beijing Declaration and Platform for Action, at all levels including through systematic gender mainstreaming, resource mobilization, robust data, monitoring and accountability systems. This mandate is further reinforced by CSW 60 Agreed Conclusions with the additional reference to the 2030 Agenda for Sustainable Development.

In defining the ‘how’ to achieve commitments I want to refer to ten key levers of change that I call the Ten ‘I’s:

Inspiration. As a comprehensive, inclusive and universal development framework for action, the 2030 Agenda must be our inspiration and Civil society is called to harvest the gender equality compact across sustainable development, human rights, peace and security and the humanitarian commitments to advance its critical work.

Indivisibility of the SDGs and targets - horizontal and vertical. All SDGs must deliver for gender equality and women’s empowerment. SDG 5 and gender-sensitive targets threaded across all SDGs must be prioritized in the implementation of those targets.

Integration and systematic mainstreaming of gender equality and women’s empowerment across all SDGs and the entire 2030 Agenda implementation in its three dimensions, coordination of UN system and an all of government and all of society approach.

Institutions. The Agreed Conclusions gave a boost to national gender mechanisms for gender equality like women's ministries, and other bodies, by committing to strengthening their authority, capacity and funding, and to promote the visibility of and support for them thus enhancing the effectiveness and resourcing of national institutional arrangements and mechanisms for gender equality at all levels including in support of mainstreaming of gender perspectives across all policies and programmes in all sectors of government.

Investment. Significantly increased and enhanced financial investment and resources mobilization from all sources, at all levels - targeted and mainstreamed, transformative actions for financing gender equality and the empowerment of women.

Inclusion of all key stakeholders particularly the civil society, women's movement, youth, men and boys, and faith-based organizations for movement building, transforming social norms and addressing the needs of all women and girls especially those facing multiple and intersecting forms of discrimination and marginalization. The Agreed Conclusions committed Member States to promote "an open, inclusive and transparent engagement with them in the gender-responsive implementation of the 2030 Agenda for Sustainable Development."

Inclusion also means that the private sector is called upon to be socially responsible in their acts and decisions, and to be accountable for their actions in line with the Guiding Principles on Business and Human Rights, the Women’s Empowerment Principles established by UN Women and the Global Compact, among others, in order to significantly contribute to the achievement of gender equality and women’s empowerment.

Implementation. Localization through adoption and reform of laws, policies and measures including special measures and actions, the removal of discriminatory laws and policies, and ensuring their full effective and accelerated implementation with the participation and voice of women’s organizations all throughout the planning, implementation, monitoring and accountability stages.

Impact. Civil society is called upon to capitalize on the aspirations set out in the 2030 Agenda, demanding highest accountability of governments and all stakeholders in delivering full, effective and accelerated gender responsive implementation, follow-up and review.

I encourage you to adapt the ten ‘I’s to your very critical task of supporting implementation and exploiting the opportunities to overcome the remaining challenges. Most importantly, use the ten ‘I’s as guiding principles in both your advocacy work as well as in holding governments and all other stakeholders to account for their commitments, including with respect to ensuring "a safe and enabling environment for all civil society actors so that they can fully contribute to a gender-responsive implementation, follow-up and review of the 2030 Agenda." This is a remarkable commitment that civil society must leverage in positing as critical actors in the achievement of the 2030 Agenda.

Colombia has made important progress in terms of education with women now being 56 per cent of those who graduate from university programmes. Also, in the leadership of women in the private sector it is commendable that 53 per cent of management positions in Colombian companies are held by women. According to the latest report last year of the ILO, Jamaica and Colombia are the countries with the largest number of women managers.

Yet progress continues to be uneven and slow, and three interrelated dimensions can be highlighted with a substantial impact on women’s rights:

Overcoming these challenges and using the SGD agenda as a platform for the peacebuilding process, must be a priority in Colombia to ensure full resonance of the 2030 Agenda, for which Colombia played a critical leadership role in its negotiation. Now it is time to ensure that in translating commitments from paper to actions, Colombia also takes the necessary steps in ensuring a full, effective, and accelerated gender–responsive implementation of the 2030 Agenda.

To finish, let me emphasize that as civil society, you have a great role in ensuring the full, effective and accelerated gender-responsive implementation of the 2030 Agenda.