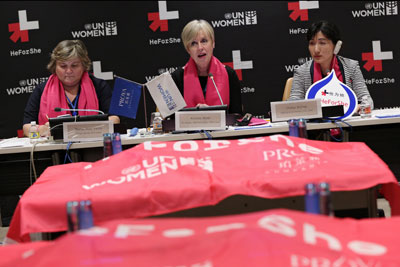 Thirty eight companies from China signed the Women’s Empowerment Principles (WEPs) CEO Statement of Support. The Women’s Empowerment Principles, developed by UN Women in collaboration with the UN Global Compact, outline seven steps for companies to improve women’s empowerment at work and in the marketplace. Prior to this, CEOs from more than 1,074 companies had already officially endorsed the WEPs, including 16 from China. With the latest signings, the largest number of signatories in the Asia-Pacific region come from China.

The companies were part of a delegation led by private sector donor to UN Women, PROYA Cosmetics Co. Ltd. The group visited New York on 23-24 November and met with representatives of UN Women, including Kristin Hetle, Director for Strategic Partnerships, and Maria-Noel Vaeza, Director of UN Women's Programme Division, to learn about women’s economic empowerment initiatives in China and worldwide.

PROYA partnered with UN Women in 2013 and became the first Chinese company to sign on to the WEPs. It has contributed more than USD $800,000 to UN Women to date and supported several gender equality programmes in the areas of equal employment and labour protection, climate change and disaster risk reduction, and corporate social responsibility, as well as supporting the China Gender Fund for Research and Advocacy, which funds innovative projects on a wide variety of gender issues across China.