On Human Rights Day, a spotlight on regional programmes to end discrimination and ensure women’s human rights in Southeast Asia.

“It’s important to understand CEDAW because it acts as an umbrella, protecting all women across the globe,” said Maria Abrantes, a high school student and women’s rights advocate from Timor-Leste. She attended a 2014 workshop organized by the International Women's Rights Action Watch (IWRAW) Asia-Pacific with support from UN Women’s Fund for Gender Equality (FGE). Participants learned how to recognize gender-based discrimination and fight for change using the Convention on the Elimination of all Forms of Discrimination against Women (CEDAW). 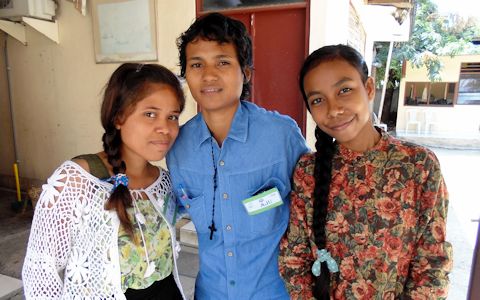 (From left to right) Yane Elfrida Domingas Maia, Juliana de Fatima and Maria Abrantes are among the 30 young girls from Timor-Leste who attended the workshop on advocacy for women’s rights. Photo: UN Women/Christina Yiannakis

“We not only need to be aware of the constitutional and penal codes in Timor that protect our rights,” added Ms. Abrantes, “but we also need to understand that CEDAW is an international instrument that we can use to ensure that all women are protected from discrimination and that our laws respond to this right.”

This activity is one of many undertaken across Asia-Pacific—with civil society organizations and governments alike—to further the implementation of CEDAW. Adopted by the United Nations General Assembly in 1979, this international human rights treaty has been ratified by 189 Member States to date.

In Southeast Asia, all governments have ratified and made progress towards their obligations under the Convention. Fewer have ratified its Optional Protocol; however countries such as Cambodia, the Philippines, Thailand and Timor-Leste have done so in recent years.

States Parties must submit reports on their progress a year after ratification and every four years after that. Such reports show some laws have been amended to prioritize women’s human rights, and new laws have been enacted in areas such as domestic violence, sexual harassment and rape, and human trafficking.

In 2013, UN Women supported a series of workshops for government staff in Viet Nam, which led to an increased number of references to CEDAW and human rights concepts in revised laws.

Following a training supported by UN Women in Indonesia, LGBTI and women’s human rights defenders drafted a CEDAW Shadow Report to highlight the rights of marginalized groups. The report was submitted to the CEDAW Committee in connection with the Committee’s consideration of Indonesia’s periodic report in July 2012.

In 2013, UN Women supported the Government of Afghanistan in submitting its first-ever report to the CEDAW Committee, as well as supporting the civil society Shadow Report by the Afghan Women’s Network. The same year, UN Women also supported the Government of Pakistan in submitting its fourth periodic report to the CEDAW Committee, which also integrated civil society perspectives.

After a UN Women-supported training for a network of women living with HIV in the Philippines and Thailand, local leaders addressed the specific discrimination they highlighted. A UN Women and UNAIDS collaboration on the relevance of CEDAW to the HIV response also enabled women living with HIV across Viet Nam to connect with other advocacy networks on women’s rights and improve their rights-based advocacy skills.

“After the training, we feel stronger, have a better understanding of each other and are more confident,” said a Vietnamese participant from a national network of women living with HIV. “We found it very important to claim our rights as women living with HIV in the CEDAW Shadow Report.”

At the regional level, with funding from Canada's Department of Foreign Affairs, Trade and Development, the regional CEDAW Southeast Asia Programme (CEDAW SEAP), has been promoting gender equality in Cambodia, Indonesia, Lao PDR, Myanmar, the Philippines, Thailand, Viet Nam and Timor-Leste. Since 2004, it has collaborated with governments and civil society to strengthen their capacity to promote women’s human rights at national and regional levels, while encouraging stronger political will and commitment to CEDAW implementation.

The programme has been credited with strengthening the capacities of ASEAN Human Rights bodies. It also established the first network of gender-sensitive Supreme Court judges and legal practitioners in ASEAN, and developed an online community of practices called Community for Change-Makers.

The FGE-supported IWRAW programme partners women’s networks in four countries to support the activism and advocacy of young women around human rights. They reach out directly to their peers and key stakeholders. In the Lao People’s Democratic Republic, they’ve chosen to focus on access to education for rural girls and; in Malaysia, on sexual harassment in the workplace; in Viet Nam, they are focusing on intimate partner violence; and in Timor-Leste, on re-integrating young mothers into schooling.

In Timor-Leste, the young women successfully joined forces with other women’s rights activists to develop a CEDAW Shadow Report ahead of the Committee’s review of Timor-Leste’s periodic report in November 2015.

With CEDAW, “I feel like I have a tool,” says 20-year-old Nguyen Thi Kim Anh, of Viet Nam’s Young Women Making Change Group. “When I’m working in women’s human rights, I know I have a kind of weapon.” In July 2015, she was among a group of young women who raised the issue of dating violence at the 61st CEDAW session in Geneva, in connection with the Committee’s review of Viet Nam’s periodic report. The CEDAW Committee included the topic among its recommendations in its concluding observations.

Watch a video on the IWRAW programme.

Related News
11/12/2014
Around the world, women and men of all ages “orange their hoods” to end violence
11/02/2013
Q&A with H.E Khawar Mumtaz, Chairperson of the National Commission on the Status of Women, Pakistan
21/03/2014
Collecting and carrying water, burdensome reality for women
18/02/2013
Governments, rights advocates and experts from across Asia and the Pacific gather to unify efforts to end violence against women ahead of CSW57
15/02/2013
Burns Violence Survivors rebuild their lives in Nepal
END_OF_DOCUMENT_TOKEN_TO_BE_REPLACED