(10 March, New York)— At a star-studded event today in New York City, high-powered speakers took the stage to put out a clarion call: a firm expiry date of 2030 for gender inequality, with real equality being nothing short of 50-50. The packed Planet 50-50 by 2030: Step It Up for Gender Equality event was a UN Women-hosted celebration for the 20th anniversary of the historic Fourth World Conference on Women in Beijing. Speakers called for bolder actions from governments and louder mobilization from citizens to move forward the agenda on women’s rights and gender equality, saying progress in the last 20 years has been too slow.

Keynote speeches from President of Liberia Ellen Johnson-Sirleaf, UN Secretary-General Ban Ki-moon and Former U.S. Secretary of State Hillary Clinton opened the evening, which brought together politics, arts, philanthropy and activism in a powerful combination to support the rights of women and girls worldwide to an audience of some 2,000 people. 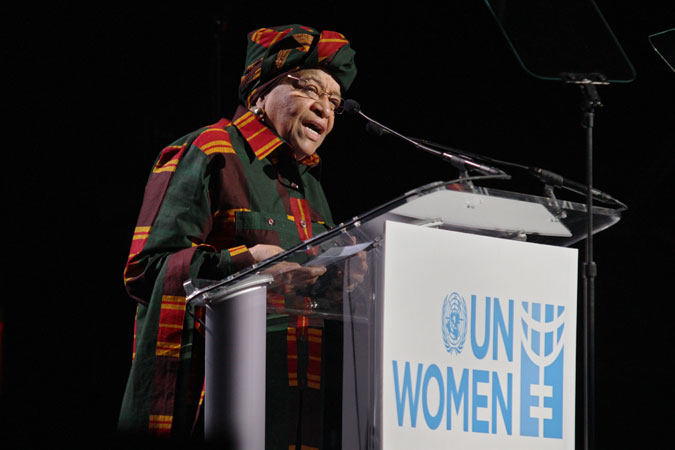 “Today we celebrate, but we still have a long way to go,” said President Ellen Johnson-Sirleaf. “It is a time to recalibrate the global agenda. As we walk this path … we bring the same courage, the same resilience, the same persistence, to make Planet 50-50 a reality. Because we can build on the accomplishments and the experience that we already have.”

“Women’s and girls’ voices too often go unheard, their talents and initiative unused. This is to the detriment of the world’s prosperity and security,” said UN Secretary-General Ban Ki-moon. “Too often, leaders have used women to advance power. I believe we must use power to advance women.” 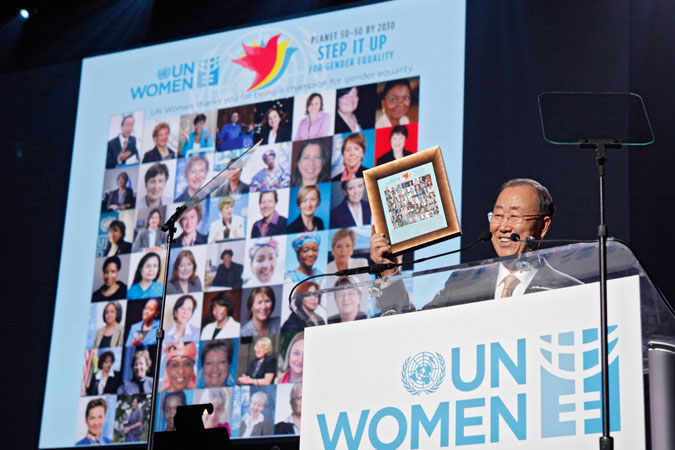 At the 10 March celebration, UN Secretary-General Ban Ki-moon proudly displayed a photo collection of the record number of women he has appointed to top UN leadership positions during his tenure. Photo: UN Women/J. Carrier

Emphasizing the leitmotif of the evening, UN Women Executive Director Phumzile Mlambo-Ngcuka underlined the benefits of a gender-equal society, and the need for immediate concerted action, saying: “This evening celebrates women’s achievements since Beijing; it’s also a moment to gather up and focus our combined energy on the task ahead. Tonight, I am putting out an SOS to the world: let’s STEP IT UP. We can no longer leave behind half the world’s population. Women and girls are essential equal partners for real progress, for peace, for development and for a world in balance.” 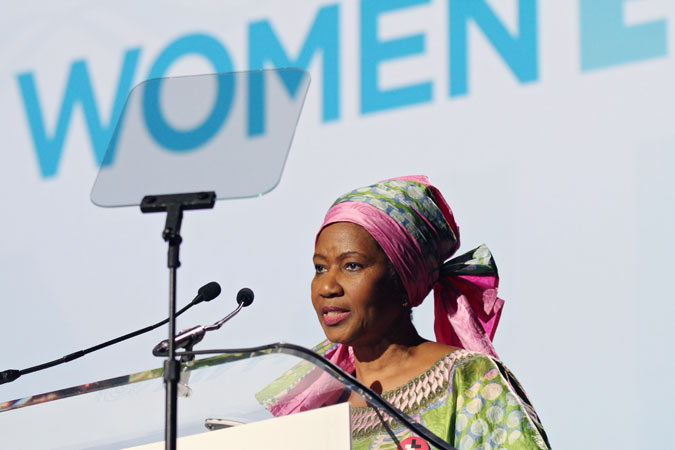 Moderated by WABC’s Sade Baderinwa, the event commemorated the 20th anniversary of the Fourth World Conference on Women in Beijing that set the ground-breaking agenda for women’s rights in 1995. Tonight, stalwarts who were at the Beijing Conference lit up the evening to thunderous applause, along with younger activists, fusing the past and the future. 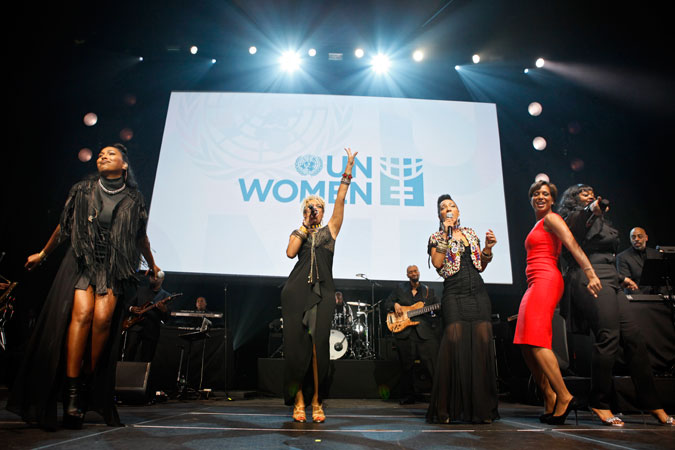 “Twenty years ago, declaring that women’s rights are human rights was considered ground-breaking – thankfully it’s now routine,” said former U.S. Secretary of State Hillary Clinton. “I see a future where we unlock the vast potential for women. To realize this vision we’ll have to step it up – step up our commitment to finishing this, the great unfinished business of the 21st century.” 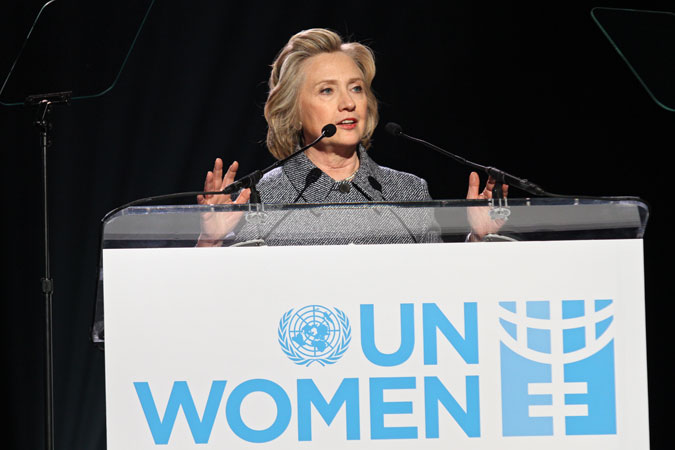 “We need action to see change. Who is responsible for this change? You are. I am,” said Patricia Arquette, who issued a strong call to close the gender pay gap. “We are voters. We make 87 per cent of the purchasing decisions. We have the power of our purse to make sure the companies we buy from treat their employees fairly.”

Electrifying performances brought the message home and the audience to their feet, including a song and poem by UN Women’s Goodwill Ambassador and actor-director-singer from India Farhan Akhtar, Founder of Men Against Rape and Discrimination (MARD). “Gender violence and gender inequality is not just a women’s issue. It’s also a man’s issue. It’s not just because we have mothers, wives, sisters and daughters. We’re here because it’s a human rights issue and we are all human beings,” he said. 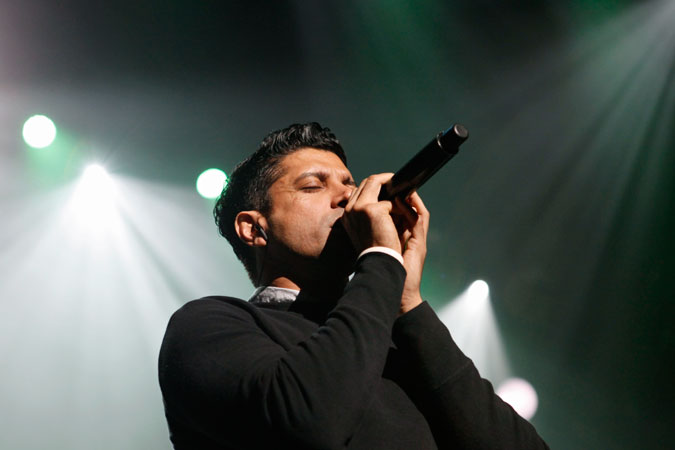 Bollywood star Farhan Akhtar brought home the point that gender equality should be also be something of concern for men. Photo credit: UN Women/Chasi Annexy

Other performers included acclaimed singer and actress Jill Scott, R&B artist Melanie Fiona and Grammy nominated duo Les Nubians, along with comedian and actress Maysoon Zayid, and host of others.

Pledging their support to the unfinished business of gender quality, private sector leaders such as Twitter supported the event, with others making concrete commitments, including the Angelica Fuentes Foundation, Uber, the UN Foundation, and the Cheryl Saban Self-Worth Foundation for Women and Girls, among others.

“Just remember this:  because of an imbalance of power, gender inequalities and violence, little girls and women are forfeiting their choices, their smiles, their vitality, their art, their music, their childhoods, and their identities. But we cannot sit here with the resources we all have at our disposal and let them also lose their hope,” said Cheryl Saban, Founder of the Cheryl Saban Self-Worth Foundation for Women and Girls, which supported the event. “Think of it this way. In a pride, the lioness does all the work. So I challenge you to find your inner “roar” and Run like a Girl.” 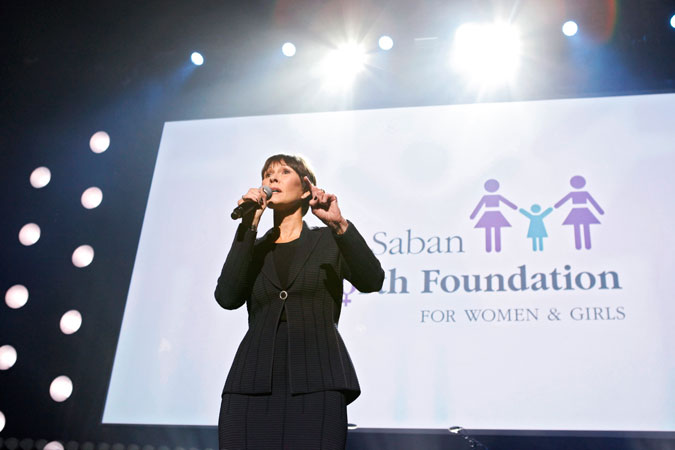 Bringing together the UN, civil society, private sector and New Yorkers, the event also went global through social media, including via a live Twitter mirror where celebrities posted from the event, and where tweets from all over the world were curated.

Photos from the event are available at: https://www.dropbox.com/sh/d87cbnklwq50n7o/AAASKpiIP4_MMRLvUD7eA3R7a?dl=0

Related News
09/03/2015
“In 2030 we want to be able to talk about a world that has achieved gender equality” – UN Women Executive Director
09/03/2015
Press release: Governments commit to scale-up investments in women’s empowerment
08/03/2015
Stepping it up on the streets of New York City
06/03/2015
Press conference: "Collective failure of leadership on progress for women"
02/03/2015
Message of the Executive Director: We call on countries to “step it up” for gender equality
END_OF_DOCUMENT_TOKEN_TO_BE_REPLACED