Stepping it up on the streets of New York City

Thousands sang, chanted and rallied for gender equality during a march to mark International Women’s Day.

New York– Waving signs and holding banners bearing the slogan “Planet 50-50 by 2030: Step It Up for Gender Equality and Women’s Rights”, thousands snaked through midtown Manhattan on 8 March in a collective show of solidarity for the global women’s movement.

“We need global action – Action!” UN Secretary-General Ban Ki-moon urged the energized crowd assembled in Dag Hammarskjöld Plaza, near the United Nations Headquarters. Reflecting on the 20 years since world leaders adopted the Beijing Declaration, he said “progress is too slow, too uneven.” 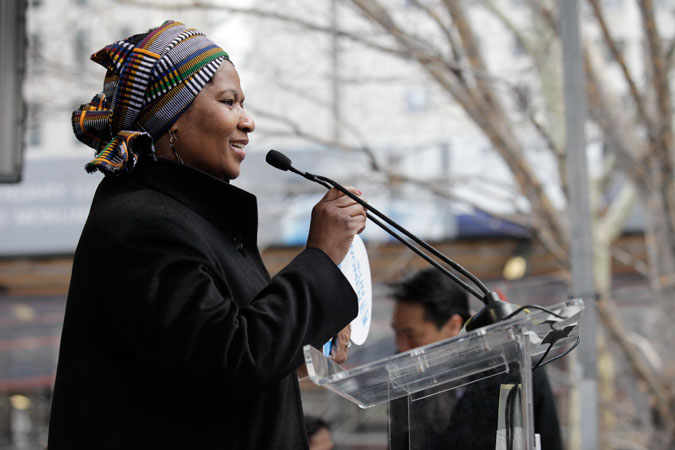 UN Women Executive Director Phumzile Mlambo-Ngcuka opened with a chant: "We want gender equality! When do we want it?" to which the crowd responded with a thundering "Now!". Photo: UN Women/J. Carrier.

“This march is about all of us sending a message,” said UN Women Executive Director Phumzile Mlambo-Ngcuka, further rallying the crowd: “We are here today to start a journey that has an end. Gender equality has to be something that is in sight. … We are calling for Planet 50-50 before 2030!” 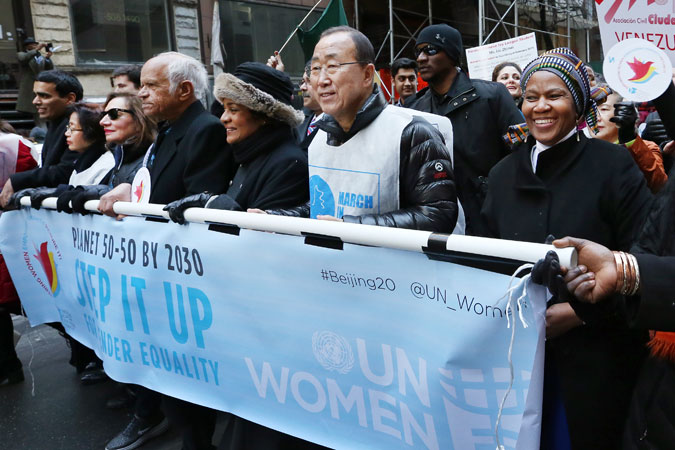 Joining Ms. Mlambo-Ngcuka with inspiring words to kick-off and lead the march were the First Lady of the City of New York Chirlane McCray, Nobel laureate Leymah Roberta Gbowee, actors Paul Bettany and AnnaLynne McCord, and dozens of other women’s rights leaders and activists.

Among the marchers who braved the slushy streets and chilly winds was 91-year-old feminist Dotty Prunhuver. She attended the First World Conference on Women, as well as the Fourth World Conference in Beijing. “I think we’ve come a long way, but we’re not there yet,” she said.

The march snaked around 13 blocks, to symbolically represent the 12 critical areas of concern of the Beijing Declaration and Platform for Action and the overall theme of "Planet 50-50 by 2030: Step It Up for Gender Equality and Women's Rights". 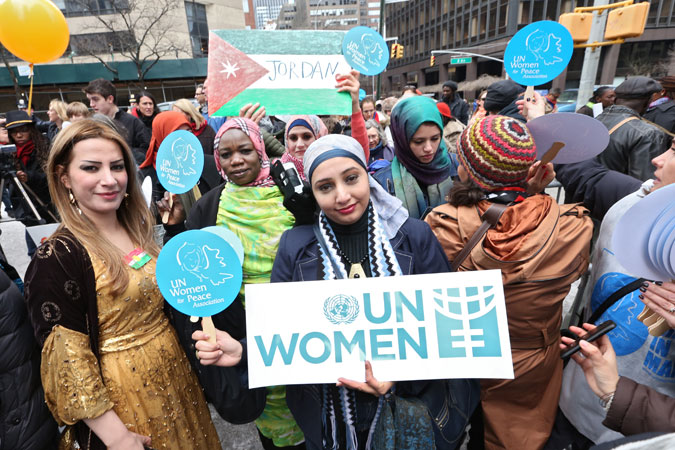 Women from many countries and walks of life joined the march, calling for women's rights to become a reality, everywhere. Photo: UN Women/Ryan Brown.

It concluded before a stage near Times Square, where a series of speakers gave inspiring final words. Among them was 17-year-old Isabella, of the Working Group on Girls NGO: “By 2030, I will be 32 years old. I demand to live in a world where gender equality is a reality. Not words in a speech, but a reality for every girl in every part of the world!” 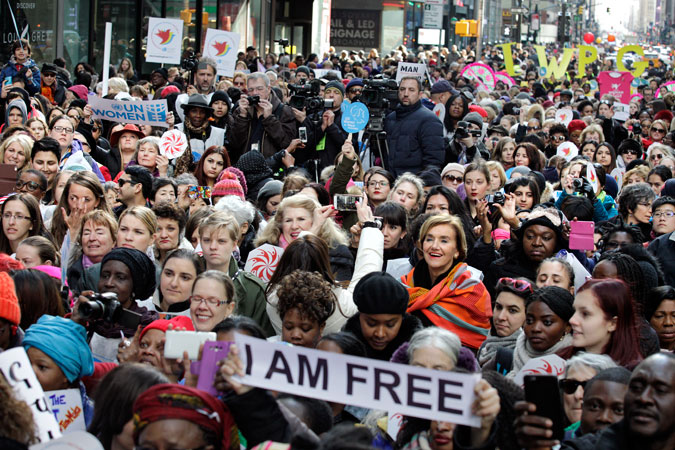 The crowd assembled before the closing stage stretched all the way from 42nd Street down past 35th Street. Photo: UN Women/J. Carrier.

Co-organized by UN Women and the City of New York, with the UN Women for Peace Association, NGO Committee on the Status of Women, NY (NGO CSW/NY), Man Up and The Working Group on Girls NGO, the event ended with a song and call to governments to step up efforts to achieve gender equality.

Nearby, the giant video screens of the NASDAQ Stock Exchange and Reuters towers in Times Square flashed a series of messages repeatedly throughout the day to promote UN Women’s Beijing+20 campaign, the theme of which will be the focus of the 59th Commission on the Status of Women on Monday.

Watch a UNTV video report on the march here.

In case you missed it on social media:

"We want gender equality, we want it now!" - March for Gender Equality on #IWD2015! #Beijing20 pic.twitter.com/Cmv7ypiMRQ

"Let’s work together to make this world stronger for all women” - Ban Ki-moon at #Beijing20 #IWD2015 march in NYC pic.twitter.com/luVt4D3C6t

Today and every day, we march for gender equality! #IWD2015 #Beijing20 pic.twitter.com/VDfMDXQ3Dh

Related News
02/03/2015
Message of the Executive Director: We call on countries to “step it up” for gender equality
17/03/2016
Press release: “We need to challenge folks to step up,” says Canadian Prime Minister at UN Women event
10/03/2015
Press release: Galvanizing global attention, world leaders, celebrities and activists unveil Planet 50-50 by 2030: Step It Up for Gender Equality
09/03/2015
Post-Beijing voices
09/03/2015
“In 2030 we want to be able to talk about a world that has achieved gender equality” – UN Women Executive Director
END_OF_DOCUMENT_TOKEN_TO_BE_REPLACED