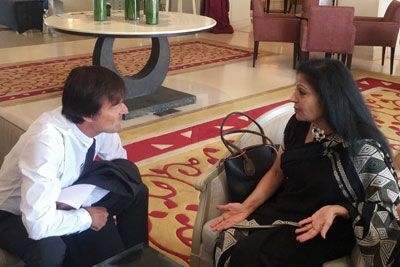 On 30 May, at the “Women for Climate” Conference in Skhirat, Morocco, UN Women Deputy Executive Director Lakshmi Puri met with Nicolas Hulot, Special Envoy of French President François Hollande on Climate and Chief negotiator for the 21st Conference of Parties (COP21).

She briefed him on progress made to ensure that gender equality and women’s empowerment is given proper attention in climate change and governance discussions and in the legally binding international agreement to be adopted at COP21 in Paris, in December 2015.

Ms. Puri underlined the need to strengthen advocacy and political mobilization and to bring evidence from the ground in order to push for gender equality and the empowerment of women to be prominently featured in this agenda forward. She also highlighted the need to promote women's role not only as beneficiaries but mostly as key players of international, national and local action on all the aspects of climate change, including in adaptation and mitigation. Ms. Puri urged the new climate agreement to be backed up by dedicated financing, technology development transfer, and capacity-building and that women’s agency and specific needs and demands to be fully addressed.

Mr. Hulot noted the progress made so far on gender equality and women’s empowerment and agreed on the need to continue to step up efforts in all the negotiation sessions leading up to COP21. He reaffirmed French Foreign Minister Laurent Fabius’ commitment to the issue of gender equality and climate change, as highlighted in his HeForShe statement, as well as his personal dedication to promoting gender equality on the way to COP21.

Both parties agreed to continue to discuss how to strengthen UN Women's support for this process.