A group of women living in Moroccan oases have found a unique way to earn an income and mitigate the effects of climate change on their environment by cultivating medicinal and aromatic plants, using renewable energy.

Amid the expanses of sand and rock, the arid desert landscape is interrupted by a vibrant patch of greenery. Oases are natural sanctuaries around which communities are built, providing scarce water, food and refuge from the harsh surroundings. 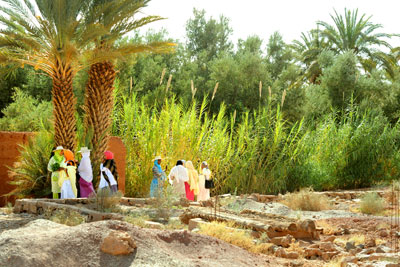 A Group of women attend a workshop in the oasis of Serkla, Guelmima. Photo: UN Women Morocco.

More than 100 women living in oases in the south-eastern province of Errachidia have found a unique way to mitigate the effects of climate change on their environment by producing medicinal and aromatic plants (MAPs). UN Women, with the support of the UNDP Tafilalet Oasis Programme and the Swiss Cooperation, organized workshops on how to cultivate MAPs using renewable energy, while promoting the work of women. One result was the creation of an Economic Interest Group, which allowed the women to bring their products to the market in a more organized way.

Women like Atiqa Jorfi, Vice-President of the Aftawik association based in the rural community of Ghriss Essoufli, in Errachidia, have been empowered through the production and commercialization of these crops in oases, which constitute a natural barrier against desertification but are susceptible to degradation as a result of climate change.

“It is the passion for plants that has encouraged us to continue to settle in this place we care for,” said Ms. Jorfi. She explained that her work with MAPs has increased her confidence, and she has noticed that other women who are involved in the initiative have felt more empowered within the community.

The women understand that protecting the oases is crucial, not only for their ecological importance but also their economic value, as 90 per cent of the economic activity in oases is derived from agriculture. Medicinal and aromatic plants yield a higher profit than traditional crops. They have also proven to be able to withstand the harsh climate, and have low water requirements.

Populations living in oases have seen their livelihood endangered because of soil degradation and water scarcity as consequences of climate change. This, in turn, can lead to the further sprawl of surrounding desert. Women are especially vulnerable due to the unequal distribution of roles, resources and power between women and men. 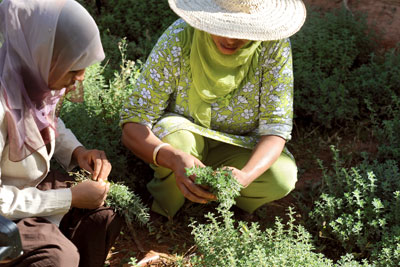 To overcome such vulnerability, women members of the Annama Association have seen their livelihood improve through the project. Created in 2012, the group started out by acquiring a hectare of land to plant the seeds, and decided to use the drip irrigation method and a solar pump to cultivate their crops in the most sustainable way possible. Theirs is a success story: in only two years, they have seen their incomes increase, allowing them to open their own bank accounts, and achieve financial independence this way.

The project’s accomplishments have far exceeded expectations. The economic interest group now brings together 12 cooperatives and 15 NGOs to support the production and commercialization of the women’s herbs. More than 100 women in eight oases have already participated in trainings and watched their incomes grow. After only two years, the Annama Association was able to buy a second hectare of land to continue their MAP production, and they are hoping to acquire more fields. They are also hoping to extend their experience to other ksours (neighbourhoods) and villages.

By continuing the production of MAPs in a sustainable way, the women of another oasis, in Tizagharine, are not only able to earn a living, but they are also contributing to the resilience of the oasis ecosystem to better resist the threats posed by sprawling desertification and climate change.

Massaôudi Lkbira, President of the Annama Association, says that these women work hard, “struggling for a more dignified life.” No one would have believed two years ago that these women, of whom only three could read and most had not stepped outside the city of Errachidia, would have opportunities to relocate and to participate in workshops and meetings, and would gain more confidence each day.

“This project has demonstrated that rural women have a priceless ancestral know-how and can be described as custodians of agricultural diversity,” said Leila Rhiwi, a representative of UN Women Mahgreb. “This proves how important it is to keep promoting their participation in the formulation, planning and implementation of environmental policies, but we also need to double our efforts to ensure their right to the environment. Sustainable development within the framework of climate change is not possible without the full participation of women.”

Related News
12/12/2017
Press release: UN Initiative to boost resilience of women and youth in the Sahel through climate-smart agriculture launched at One Planet Summit
24/05/2022
Speech: Women’s land rights are intrinsically and vitally linked to gender equality
01/12/2015
Q&A: "Women's voices and the challenges they address must be key components of the adaptive responsive to a changing climate" —ecological expert
15/10/2015
“We must take every opportunity to ensure that rural women do not lag behind, but rather lead the way”— Executive Director
03/06/2015
Lakshmi Puri meets with Nicolas Hulot at Climate Conference in Morocco
END_OF_DOCUMENT_TOKEN_TO_BE_REPLACED