While many policies and practices have improved the integration of gender equality and women’s empowerment into humanitarian action, there has been little by way of concrete evidence of its impact. However, a new research study by UN Women  has confirmed the positive affect that gender equality programming can have on humanitarian outcomes, and proposes ways to further enhance the impact. 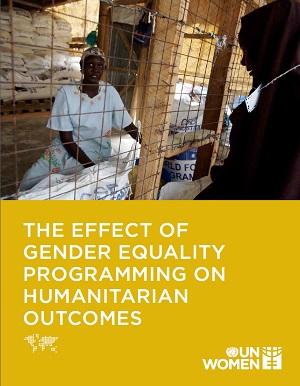 The study collected and analysed evidence on the effects of gender equality programming by surveying more than 2,000 crisis-affected households and organizing focus groups in four case-study locations: Nepal, the Philippines and two sites in Kenya (the county of Turkana and the Dadaab refugee camps). Information was collected from women and men – as well as key informants, such as humanitarian workers and community leaders – in the target communities to determine if the gender-equality programming improved their humanitarian outcomes and, if so, how.

A unique new “Gender Intensity Measure” was used to analyse the evidence and assess the degree to which gender equality and women’s empowerment was perceived to have been integrated into humanitarian programmes – by hearing from women beneficiaries themselves.

According to the report, improved gender equality programming in humanitarian settings led not only to improved quality of life for all community members, but also to greater access to services, better identification of the needs of beneficiaries, and heightened empowerment and aspirations among young women. Some examples of such programming making humanitarian services more effective included:

In addition to all the humanitarian outcomes of gender-targeted programming, an improvement in gender equality could also be measured. In the Philippines, Nepal and Turkana, women reported greater decision-making power and agency when humanitarian services were perceived as being gender-equal; while in Dadaab, placing women in leadership roles in the implementation of humanitarian services promoted greater empowerment of women and increased the aspirations of young girls.

The study also provides guidance on how to best blend gender equality programming and humanitarian interventions to increase effectiveness in the future. Promoting awareness of gender equality programming, embracing men and boys as participants and facilitating economic empowerment were all demonstrated to have the potential to make humanitarian action more effective for all those affected.

This report was prepared by UN Women on behalf of the Inter-Agency Standing Committee (IASC) Reference Group on Gender in Humanitarian Action and with co-funding from the Department of Foreign Affairs, Trade and Development of Canada.

Related News
15/08/2022
Statement: ‘Meticulously constructed policies of inequality’ – Afghanistan one year on
15/08/2022
In focus: Women in Afghanistan one year after the Taliban takeover
23/06/2022
Op-ed: End the disconnect
25/05/2016
At WHS, participants vow to put women and girls at centre of decision-making
18/01/2016
Fostering a new, empowered generation
END_OF_DOCUMENT_TOKEN_TO_BE_REPLACED