Dressing up a soccer stadium for survivors in Kosovo 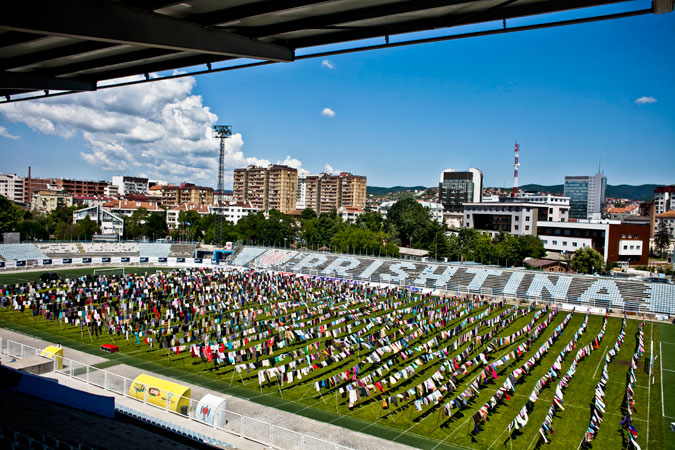 Kosovo-born artist Alketa Xhafa-Mripa hung thousands of dresses in the football stadium in the city of Pristina as tribute to survivors of conflict-related sexual violence. Photo: Jetmir Idrizi

Thousands of dresses hung on washing lines in the football stadium of the city of Pristina pay tribute to the survivors of conflict-related sexual violence in ‪Kosovo (under UNSCR 1244)*. They’re part of an art installation “Thinking of You”, by Kosovo-born artist Alketa Xhafa-Mripa, which aims to increase awareness while giving voice to long-stigmatized survivors.

People across Kosovo donated more than 5,000 skirts and dresses to contribute to the installation, which opened in the capital, Pristina, on 12 June. 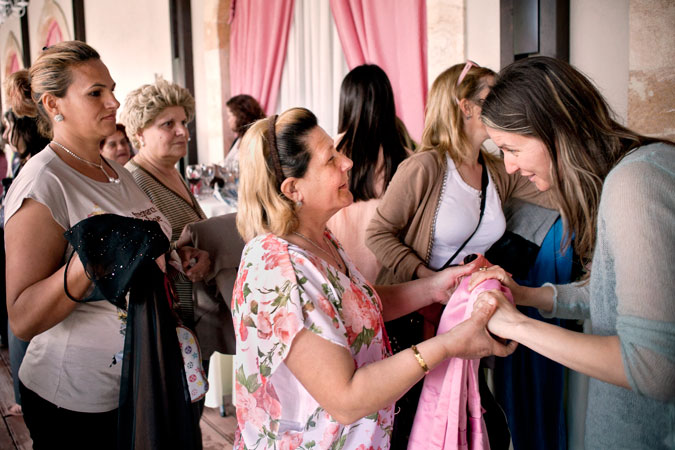 Dresses were donated by women and girls, as well as men and boys from all around the country. Photo: Jetmir Idrizi.

“We cried today from happiness that someone understands our worries and our concerns, that people have come out to support us,” said a woman survivor from the Mitrovica region in Kosovo, who was raped in 1999, with her sisters and other women. Hanging the dress in which her sister was raped, she said: “We put up our dresses today and leave them there so that we forget what we have gone through.”

During the armed conflict of 1998-1999 in Kosovo, an estimated 23 to 45,000 women experienced systematically organized sexual violence[1].This took place in their own homes and villages, sometimes even in front of their families, according to women’s groups, public institutions and international organizations[2]. 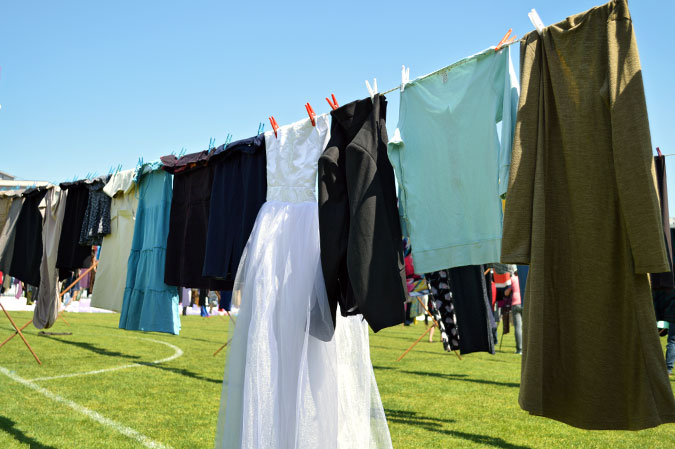 “Seeing these thousands of dresses hanging in the stadium and imagining that this number is not nearly as high as the women and girls who have been victims of violence made me very sad and furious at the same time,” said a young woman who visited the inauguration of the ceremony. “But I am very happy that finally this topic is addressed on a larger scale and that society is willing to face this horrible past.”

Sixteen years after the end of the armed conflict, few survivors openly discussed the sexual violence they experienced, out of fear of being stigmatized. But this has started to change, following advocacy and lobbying from women’s civil society organizations, women advocates and UN Women. This has been reflected in growing institutional support, including for raising awareness and breaking the silence around this issue. “Thinking of You” is the latest, and so far the biggest, attempt, supported by UN Women and organized by the National Council on the Survivors of Sexual Violence during the war in Kosovo, led by the first female President of Kosovo, Atifete Jahjaga. 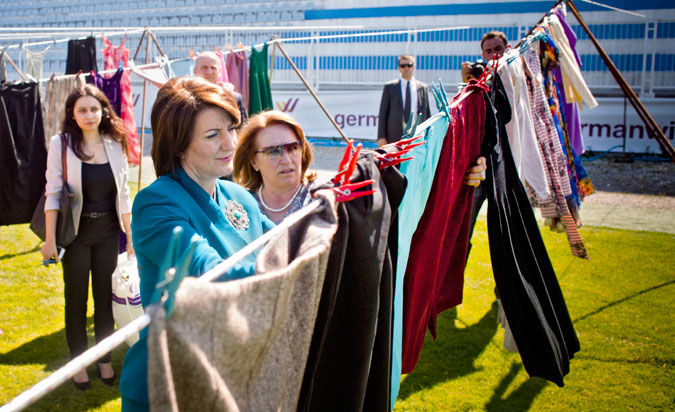 President Jahjaga also donated a dress and played a crucial role in supporting the whole installation. “I hope the survivors feel more relieved, more valued, because here we are. It is not ‘us and them’. It is ‘us’ and we are one. […] The shame does not weigh upon them [the survivors], but upon those who committed those crimes,” said President Jahjaga in her speech at the inauguration.

It took over a month to collect dresses and skirts donated by women, girls, but also men and boys, throughout Kosovo to create the unique and powerful installation. 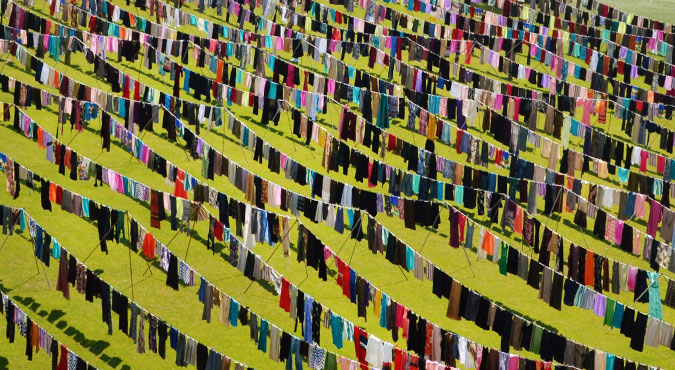 Artist Alketa Xhafa-Mripa chose to hang dresses and skirts in the soccer stadium because it is typically a very male-dominated field. Photo: UN Women Kosovo/Isabelle Jost

“I asked myself how to get the whole society, the institutions and the government to be a part of it,” explained the 35-year-old mother and artist behind the installation, Ms. Xhafa-Mripa. “The skirts stand for all women and they show that the survivors are part of us. … On the other hand, the stadium, here in Kosovo and all  over the world, is a very male-dominated field. I wanted to use these two images. The dresses in the stadium say, here we are, acknowledge us, respect us, and help us. We are here and we are many.” 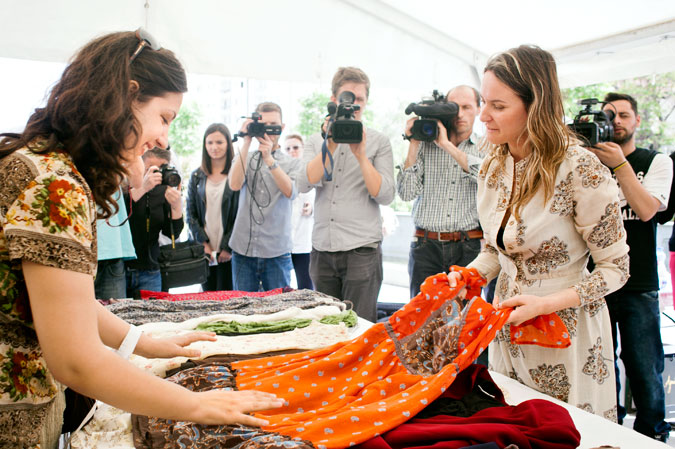 It took more than a month for artist Alketa Xhafa-Mripa (right) to collect the 5,000 dresses to hang in the football stadium of the city of Pristina. Photo: Jetmir Idrizi.

Beginning in 2014, institutional support for survivors of conflict-related sexual violence became more tangible. The Government adopted the Action Plan on Implementation of UN Security Council resolution 1325 which was developed with the support of UN Women. One of the objectives was to provide redress to survivors of conflict-related sexual violence and the Parliament legally recognized them as civilian victims. In the same year, President Jahjaga established the National Council on Survivors of Sexual Violence during the war in Kosovo, a coordination body that consists of representatives of key ministries, civil society and international stakeholders, such as UN Women, to better coordinate psychosocial and health treatment, access to justice, legal recognition, economic empowerment and awareness-raising. 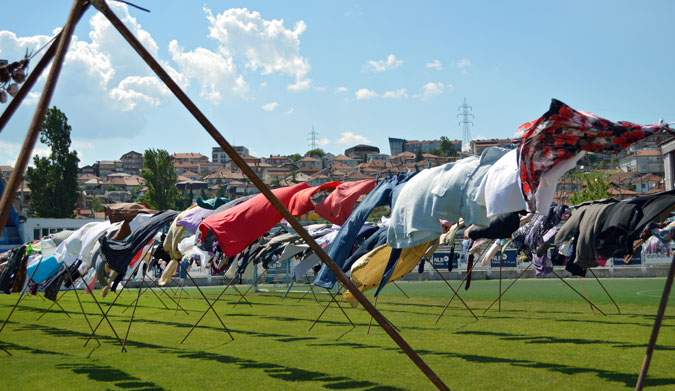 More than 5,000 skirts and dresses were donated to the installation, which opened in the capital, Pristina, on 12 June. Photo: UN Women Kosovo/Isabelle Jost.

“Thinking of You” was the first of many planned activities by the Council, with support from UN Women and other partners, to build a brighter future for survivors and their families and combat stigmatization.

“I was surprised by the huge support we received especially from rural communities and men for this installation,” said producer Anna Di Lellio. “When we were collecting the dresses in Drenas, a man approached us and handed us his wife’s dress, expressing his support and acknowledgment of the importance of our cause.” 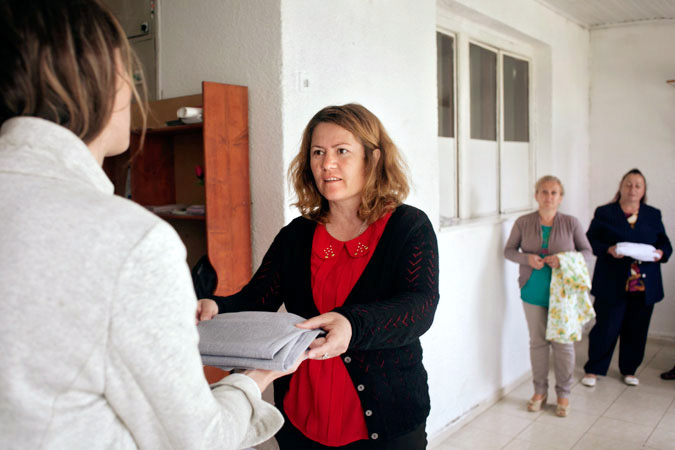 Women and girls, as well as men and boys, donated dresses to be part of the installation and raise awareness. Photo: Jetmir Idrizi

[2] United Nations Office of the High Commissioner for Human Rights. “Healing the Spirit”

Related News
18/11/2019
I am Generation Equality: “I am a child born out of wartime rape”
15/08/2016
Path to justice for survivors of Kosovo’s sexual violence: Q&A with Siobhan Hobbs
22/09/2022
Press release: New UN policy paper shows the devastating impacts of the Ukraine war on women and girls
17/06/2022
In the words of Larysa Denysenko, Ukrainian legal expert: “Sexual violence is a tactic of intimidation, torture and humiliation”
11/04/2022
Speech: Women’s involvement is both a right and an opportunity for better outcomes
END_OF_DOCUMENT_TOKEN_TO_BE_REPLACED